The government shutdown of St. Catherine's monastery over possible attacks has left the community suffering. 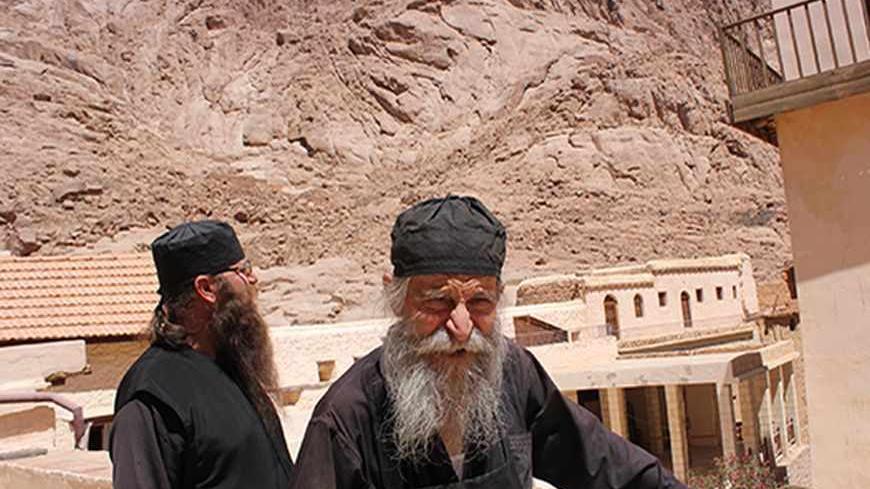 Father Paolos, a member of St. Catherine's Monastery's Holy Council, walks out of the farm for an interview with Al-Monitor on Monday, Sept. 2, 2013. He has been living in the monastery since 1972. - Mohannad Sabry

ST. CATHERINE'S — In the Sinai city of St. Catherine, a few thousand people and around 800 camels have been left struggling since the first week of August, when Egyptian security authorities ordered the total shutdown of the town's 1,500-year-old monastery. Bedouin residents of the mountainous area were forced to sell their camels, which they cannot feed, to feed their families.

Over the past 50 years, St. Catherine's Monastery closed its gates twice, in 1977 when former President Anwar Sadat made his historic visit to Jerusalem, and in 1982 when the Egyptian military entered Sinai after the withdrawal of Israeli forces. This time, the shutdown, which wasn’t explained by any official statements from either the Defense or Interior Ministry, was allegedly ordered after a failed attempt to kidnap a monk traveling in South Sinai in June and rising suspicions of a possible attack on the monastery.

"This is the third time we've closed since the early 1960s before the Israeli occupation. And even during the occupation, we remained open," Father Paolos, a member of the monastery's Holy Council who's been serving in St. Catherine's since 1972, told Al-Monitor on Monday, Sept. 2 "After the attacks on churches around the country in the past two months, we received orders from security authorities to shut down for security reasons."

"Despite having more time to pray and practice, our priests live without crowds of visitors, we are suffering a major financial crisis, and we cannot cover the monastery's expenses and dozens of families that we constantly support," said Paolos, who wore his farming clothes covered in mud.

St. Catherine's Monastery employs 400 workers from the surrounding community at its olive groves, grape farms, honey bee farms and several processing facilities including an olive oil press. As of the beginning of September, the monastery reserves decreased to a level that is barely enough to cover two months of expenditure.

"We respect the Egyptian government, and we will continue to close if they require the closure," said Paolos, "But we will have to drastically cut down salaries and other expenditures. We are saddened to lose the income we shared with the Bedouin community."

Meanwhile, the state authorities haven’t moved to help rescue the ailing community despite generating millions of dollars in revenues from hundreds of thousands of tourists who have visited St. Catherine's over the past two decades.

One example of the income generated by the state is the entrance tickets imposed by the Ministry of Environment in 2004. Since then, every single tourist is required to pay $5 to enter the town of St. Catherine's.

The monastery's administration told Al-Monitor that it operated at full capacity between 2004 and 2011, receiving 4,000 visitors — mostly foreign tourists — five days a week. And even on the monastery's days off, the town received hundreds of tourists climbing Mount Sinai and venturing around the mountains on Bedouin safari trips.

"We demanded the Egyptian government allocate a portion of those profits to the development of the local community to resolve its long-standing issues, but our requests were never answered since the entrance tickets were imposed," said Paolos.

Akin to the rest of Sinai's Bedouin communities, and despite being a bustling, internationally known tourist destination, residents of St. Catherine's have no other sources of income and their infrastructure remains considerably substandard, even non-existent. Until today, potable water hasn’t reached St. Catherine's houses, and those who don't have enough capital to dig wells are forced to buy water or carry their jerry cans to public taps built by other residents who have operating wells on their farms.

Since the January 2011 uprising that toppled Hosni Mubarak's 30 years of dictatorship, the prosperous, tourism-dependent life St. Catherine's Bedouins once enjoyed started dwindling as Egypt descended into political and security turmoil, but no other time was as devastating for this community as the two past months since the ouster of President Mohammed Morsi on July 3.

Sheikh Mousa al-Jebaly, the founder of Sheikh Mousa Lodge that was built yards from the monastery in 1982, hadn’t received a single guest since the first week of August. Sipping boiled anis at his lodge yard, Jebaly spoke on behalf of his 7,000-member Jabaleyya tribe.

"Everyone is out of business since the monastery's shutdown. The lodges, the camel stables, the safari guides and even the supermarkets and restaurants," said Jebaly. "If a foreigner appears in town now, it’s those living in the beach towns on the southern shore. They are not tourists, and they don’t stay or shop in town."

Jebaly said that the government turned a blind eye to the town's deteriorating situation.

"The tourism sector workers in Luxor have been compensated for the losses they sustained over the past two and a half years. But here no one even paid us a visit, not even the Tourism Ministry and the Tourism Development Department."

The Jabaleyya tribe — which moved from Upper Egypt to St. Catherine's around 1,600 years ago and is committed to the protection of the Eastern Orthodox community and the monastery — is composed of four clans, known locally as quarters. A few decades ago, they imposed a system of dividing all incoming businesses among the four quarters, and each quarter organizes its members to take turns in providing the services and reaping the profits. A  strict ban on monopolies is imposed by the tribal chiefs.

Ahmed Mousa, a 17-year-old Bedouin of the Jabaleyya, sat at the coffee shop in the town center. A couple of weeks prior, he sold his camel after he could no longer buy it food. His father passed away seven years earlier, and he has taken responsibility for his mother and two sisters since age 10.

"Feeding a camel costs around 600 Egyptian pounds per month ($85). [This amount was] covered when I worked every day, giving rides and tours to visitors of the monastery," said Mousa, who has worked tirelessly since his father's death to save extra money for his marriage. But his life and future plans were gradually destroyed by several factors: deteriorating tourism conditions since 2011, the monastery's closure last month and, finally, the sale of his only camel.

"Thanks to God, I sold the camel for a fair price," said Mousa, "but this camel was the family's only capital. Now we are spending its money to live and when tourism returns I will not be able to work."

At the town's coffee shop, Mousa, as well as several others who have sold or struggled to feed their camels and a few tribal elders, agreed that the town's main request for the government is for it to provide townspeople with food for their camels, the community's most precious possession.

A simple calculation made by the Bedouin gathering proposed that one month's food for the town's 800 camels would cost the government around $68,000 if bought at retail prices the Bedouins normally pay, an amount equivalent to that paid by 13,600 tourists for entrance tickets, which according to the monastery's estimates was collected in less than four days until January 2011.

"We are not asking the government for millions of dollars, we are just asking it for camel food, which would cost it nothing in comparison with the fortunes it made with the help of this community," said Mousa. "We don’t mind suffering until the tourism crisis is over, but selling our camels means destroying our lives permanently."

The Bedouins' calculation was made yards from the town's local grocery shop, where hundreds of residents opened account tabs to register their accumulating debts as they bought food for their houses and camels. On Monday, the debts had reached 70,000 Egyptian pounds ($10,000) since the monastery shut down last month.