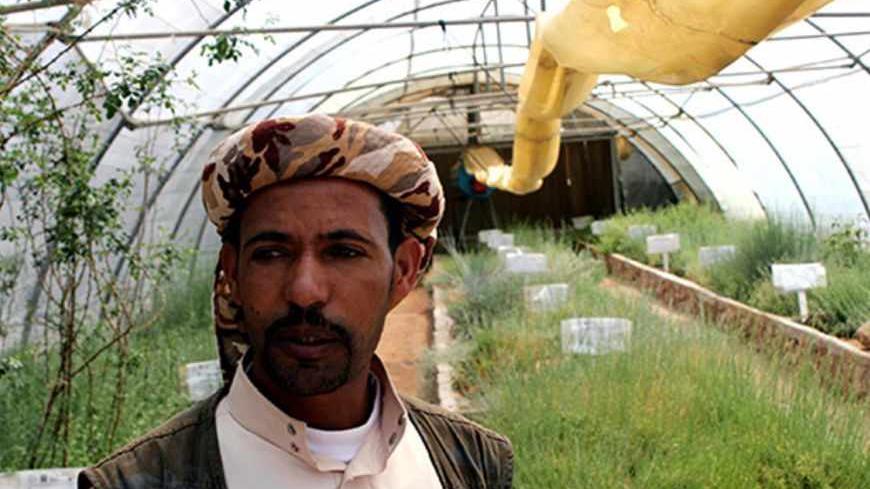 Ahmed Saleh, the 38-year-old herbalist who persuaded 62 opium growers to turn their fields into medicinal herb plantations, speaks to Al-Monitor at his greenhouse, where he successfully reproduced 16 out of the 19 Sinai-endemic medicinal herbs. Picture taken April 6, 2013. - Mohannad Sabry

ST. CATHERINE’S, Sinai — Over the past two years, 62 of Sinai’s most outlawed yet professional opium growers have turned their red-flowered fields into plantations of medicinal herbs. Their idol was Ahmed Saleh, the turban-wearing descendant of the Jabaleyya tribe that has been guarding St. Catherine’s Monastery for more than 1600 years.

Saleh, a 38-year-old tribesman who dropped out of elementary school but speaks, reads and writes English and German besides his native Arabic, grew up collecting mountainous herbs as a part of his Bedouin traditions. Almost a decade ago, instead of just boiling herbs for simple medicinal use, he excelled in developing further sophisticated combinations of Sinai’s 472 medicinal herbs, which include 19 endemic and 42 severely endangered herbs.

Since the January 2011 uprising that ousted former President Hosni Mubarak, dozens of desperate tribesmen turned to growing opium in the valleys and mountains of the peninsula after their main source of income, the tourism sector, was left struggling with massive losses due to political strife and an unprecedented security vacuum. Ahmed Saleh decided to kick off (and pledged to continue) his specially-tailored war on illicit crop cultivation.

“Each of them planted and harvested opium at a 300 square-meter field, sometimes bigger, they are naturally born, professional farmers who couldn’t find a righteous path after losing the only source of income for them and their families,” Saleh told Al-Monitor at his research farm, walking distance from St. Catherine’s Monastery. He believes that “the most criminal men could be turned into successful and dedicated servants of humanity, only with the right incentive, definitely not with guns or brutality.”

“The smallest opium field normally costs six months of hard labor and hundreds of dollars to transport water to the far-flung fields, not to mention the public shame and becoming outlaws [who must] constantly avoid main roads and dodge security,” said Saleh.

The gross profit of the 300 square-meter opium field barely reaches $2,000 every six months. After repaying the debts accumulated before harvest season, paying off security, and avoiding being shot or detained, the net profit totaled less than $1,000. Growers never garnered major profits, but the cross-border smugglers and drug lords who own processing facilities raked in millions, while a grower rarely made enough cash to start a processing facility or hire trustworthy smugglers.

Saleh detailed one out of dozens of examples of how he persuaded the opium growers to repent. “I convinced them to plant one thousand stems of rosemary in the same space they used for opium, and I supplied them with the kick-starter batch.”

After six months, the rosemary fields produced half a kilogram per bush, a total of 500 kilograms per season that totaled around $2,400 if sold raw. If processed, packaged, and retailed, the gross profit would easily cross the $5,000 limit. The only expenses of planting rosemary were a ton of water to cover the field over six months, and a few hours every day to irrigate, clean, and fight any pests that could put the field in danger.

In nature, a rosemary bush grows to more than double its size after a year, and 1,000 bushes could garner more than 2,000 kilograms in the second year.

Ahmed Saleh picks some roots and seeds at his experimental farm for a friend who drove more than 70 miles to St. Catherine’s to request the plants.

But it wasn’t only financial profits that Saleh used to lure the euphoric, adrenaline-addicted opium lovers. “I shamed them publicly, which is a major issue in our tribal, conservative and very tight-knitted community, we boycotted their weddings and stopped talking to them, their isolation played a major role in their transformation from hated outlaws into well-known, respected and trusted members of the community.”

“I don’t want to have my name mentioned because, for several months, I lied to my children about what I did for a living. I told them I still work in tourism, I was ashamed, because everyone in town knew I grew opium and refrained from even shaking my hand,” said the 45-year-old who rambles up and down some 35 mountains every week to fill a body-size sack with a long list of herbs. Turning in the full sack, he receives a generous salary that increases according to the rarity of plants he manages to collect.

“I barely made $1,800 in the most generous opium season; now I am making more than $2,000 planting and collecting medicinal herbs. I will never stop pressuring my former opium growing partners into quitting and taking an honorable job. It’s the only way to make up for what I once committed.”

The proud herbalist, who now owns a car and saves money after shaking-off the last debts he accumulated to finance his criminal business, moved his house to St. Catherine’s near Saleh’s experimental farm and two state-of-the-art greenhouses used to reproduce the endemic and endangered herbs such as Rosa Arabica, Primula Boveana Dean and Duby, and Euphorbia Sanctae-Catharinae.

Both the farm and the greenhouses successfully planted all of the 42 severely endangered kinds of herbs, and 16 out of the 19 Sinai endemic ones. Saleh and his team of 12 professional collectors are now atmospherically and topographically choosing mountainous spots to plant the seeds and roots of herbs being cultivated.

“The virgin, untouched, God-given terrain is the perfect seeds preservation bank. And when the rain comes we will have more to harvest,” said Saleh.

Meanwhile, the collector, who dropped out of elementary school but became a fluent English speaker from years of leading tourists into the mountains, is experimenting herbal cures for opium and heroin addiction.

“I am still waiting to find and import some plants that don’t grow in the Sinai Peninsula or Egypt, but I will never stop until I make this purely herbal cure and add it to our war on drugs,” said the natural-born rock climber who says that “no mountain, no matter how high, steep, or deadly it could be, would stop him from collecting the life saving herbs.”

In 2004, Ahmed Saleh established the Medicinal Plants Association, MPA, a local non-governmental organization that is currently licensed by the Italy-based Mediterranean Center for Agriculture Inspection and Certification. His world-class organic, medicinal produce is sold after being processed and packaged by members of the local community, mostly women and children, who share the small but steady income of the NGO.

Most recently, Saleh discovered what he believes are his two most successful herbal combinations so far, a cure for Hepatitis C, which 15% of Egypt’s some 90 million people are suffering according to a July 2012 World Health Organization report, and a cosmetic herbal oil for hair loss.

The secret combination of 33 herbs that allegedly cures the liver-destroying Hepatitis C if boiled and drunk twice a day for three months, and the 44-herbs oil extract that brings dead hair cells back to life if used once a day for 10 to 15 days, have both brought people from all around Egypt and other countries to Saleh’s doorstep, 1,600 meters above sea level. During Al-Monitor’s late-night interview with Saleh at his herbal-medicine processing room at St. Catherine’s, a Russian national residing in south Sinai requested two boxes of hair oil to be delivered to some of her relatives and friends in Russia after her successful experience with it.

Mohannad Sabry is an Egyptian journalist based in Cairo. He has written for McClatchy Newspapers and The Washington Times, served as managing editor of Global Post's reporting fellowship "Covering the Revolution" in Cairo as well as a contributor to its special reports Tahrir Square and Egypt: The Military, The People." Sabry was nominated to the 2011 Livingston Award for International Reporting. Born in Saudi Arabia and raised around the world, Sabry returned to Cairo in 2001 and has been covering Egypt since 2005. Follow him on twitter @mmsabry