A Saudi student's online call to challenge once again the ban on women driving has gone viral. 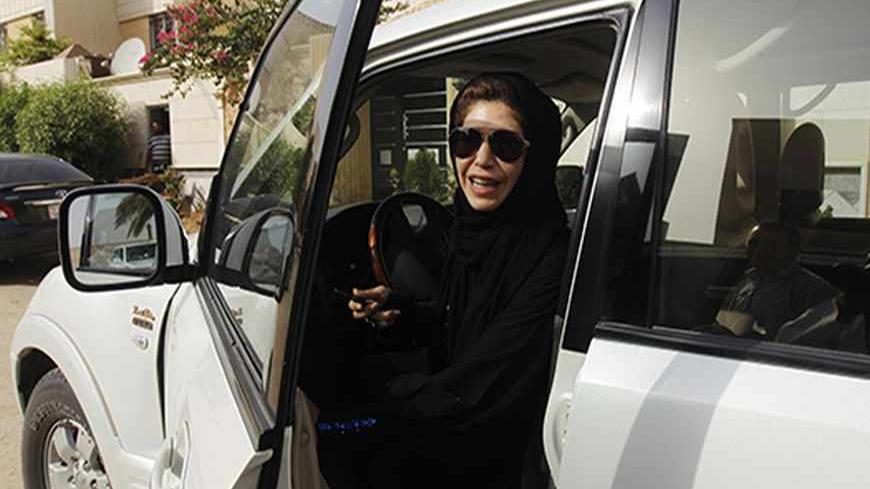 Speaking before a plain orange background, a young woman started talking in a soft voice. “Hello,” she said. “This is a new campaign to gain our right to drive cars.”

That was Lujain al-Hathloul, a Saudi student in Canada who has become an online celebrity after posting a series of videos criticizing restrictions on women in the conservative kingdom. Wearing a short haircut and dressed in a black blazer over a purple top, Hathloul called on her fellow countrywomen to take to the streets on Oct. 26 to challenge the ban on driving. Her call quickly went viral, receiving more than 600,000 views in less than four days after it was posted on the video-sharing site Keek on Sept. 20.

After two failed attempts separated by 20 years between them, Saudi women are gearing up again to challenge the ban with a new campaign.

“The campaign has no anti-Islamic or political agenda for neither Islam nor the official laws of Saudi [Arabia] prohibit women from driving,” said the website of the new Oct. 26 movement, where more than 8,000 people signed a petition to express their support. While it is true that there are no laws banning women in Saudi Arabia from driving, the police stop women they catch behind the wheel.

The young Hathloul was probably not born yet when 47 women challenged the ban on driving in the early 1990s. After driving in one of Riyadh’s main streets for half an hour, they were stopped by police. The female drivers paid heavily for their attempt to lift the ban. They were prohibited from traveling outside the country for a year, fired from their government jobs and denounced by hard-line clerics from mosque pulpits.

The second attempt came in mid-2011. As neighboring countries experienced uprisings to protest political and social stagnation, some Saudi women activists decided it was time to revisit the ban on driving. After using social media for weeks to organize and spread the message, more than 50 women around the country drove their cars on June 17, 2011. Except for two women who were stopped but shortly let go after signing a pledge, the day went by without major incidents. The police appeared to ignore the female drivers who posted videos and photos of themselves behind the wheel online.

The new campaign comes at an interesting time for Saudi Arabia. The country has largely managed to escape the wave of Arab uprisings without a major street-protest movement challenging the government, but the tech-savvy young population has become increasingly critical of official policies, using social-media sites like Twitter and YouTube to express their displeasure.

The Oct. 26 movement was launched only a few days after the Commission for the Promotion of Virtue and the Prevention of Vice, aka the religious police, instructed its members not to chase female drivers. The daily Al-Hayat quoted an unnamed senior member at the commission who said, “There are no laws in place authorizing Haia members to pull over and arrest a woman who is caught driving a car on the streets.”

The chief of the religious police, Sheikh Abdulatif al-Alsheikh, came out to deny these statements, but he added, “Islamic Sharia does not have a text forbidding women driving.” According to Reuters, Alsheikh stressed that he has no authority to change Saudi policy on women driving.

His statements may give hope to some women, but in reality they fall in line with other statements made by Saudi officials in recent months, absolving themselves of responsibility for the ban but falling short of fully endorsing a decision to lift it.

Justice Minister Muhammad al-Isa said last April that there is no constitutional or regulatory barrier to prevent women from driving in Saudi Arabia. A few months earlier, Foreign Minister Prince Saud al-Faisal said that the issue of women driving is a social matter that has nothing to do with politics. In both cases, the officials did not explain why police are still arresting women who dare to drive despite the absence of legal grounds to do so.

Like many other decisions in the country, it appears that the one to allow women to drive must come down to a royal decree by the head of state. King Abdullah bin Abdulaziz has come to be seen as a reformer who believes in female empowerment. In addition to allowing women to vote and run in upcoming municipal elections, he appointed 30 women to the advisory Shura Council at the beginning of this year.

It is hard to say if the renewed activity surrounding the issue of women driving is any indication that a change in policy is going to happen anytime soon, but Saudi columnist Tariq al-Maeena says it appears that the tide has turned.

“In recent years there has been a dramatic shift towards a more tolerant position of acceptance of all things obviously not detrimental or conflicting with the teachings of Islam,” he wrote in Gulf News. “Such a shift also signals a separation of the often veiled cultural traditions that were deeply intertwined with Islam, making it difficult to separate one from the other.”

Saudi women remain optimistic and hopeful, even if their hopes in the past never materialized to lift the ban.

Yes, i will drive again on October 26 #قيادة_26اكتوبر

Madeha al-Ajroush, a psychologist who drove in the 1990 protest, said she is ready to repeat the act, tweeting, “Yes, I will drive again on Oct. 26.”

Ahmed al-Omran is a Saudi blogger and journalist. You can read more of his work on his site, Riyadh Bureau. On Twitter: @ahmed