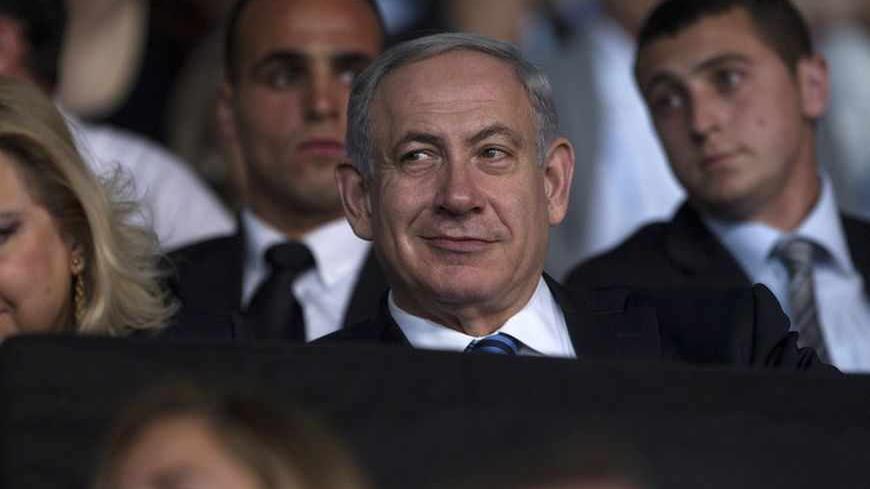 Israeli Prime Minister Benjamin Netanyahu is undoubtedly a unique phenomenon in the annals of Israeli politics. For years he has been alone at the top, without a political rival to threaten his hegemony as prime minister.

On the eve of the Jewish New Year, he can look around in satisfaction to find that he still has no potential rivals for leadership of the state. For more than four years, since the 2009 elections, Netanyahu has been the only contender for the post of prime minister. In fact, the last time he ran in a tight race against another candidate for the job was during those elections, when Tzipi Livni, then leader of the Kadima Party [and now Justice Minister], raked in 28 Knesset seats — one more than Netanyahu — but was unable to put together a coalition government. Livni’s political downfall put an end to her chances as a leadership hopeful, and she left the field.

Since then, Netanyahu has been without a significant rival. True, in the last elections, in January 2013, the chairwoman of the Labor Party, Knesset member Shelly Yachimovitch, acted as if she were running against him, but in actual fact, it was no contest. Yachimovitch, unlike Livni in 2009, was not perceived as someone who had what it takes to be prime minister. Lacking experience in diplomacy and defense, and with a one-dimensional economic-social agenda, she was not regarded by the Israeli public as a real alternative.

On the other hand, the "hero" of the last elections, Yesh Atid Chairman Yair Lapid, did not even presume to replace Netanyahu, but hinted ahead of time that he would join his government. After the elections, he announced in a televised interview that he assumed he would be prime minister, but he then regretted the remark. The only one in politics who has experience in diplomacy and defense and could have, presumably, challenged Netanyahu’s leadership in the last elections was Kadima Chairman Shaul Mofaz. His political failures and the lack of public appreciation, however, left him out of the game.

Netanyahu was only truly worried in the last elections for one moment — when former Prime Minister Ehud Olmert started warming up on the sidelines and examining the possibility of leading the political center-left. In the end, due to the legal cloud hanging over him, bad polling results and a lack of willingness on the part of the heads of the left-wing and center parties to join forces with him, Olmert shelved his plan, and Netanyahu breathed a sigh of relief. He was once again alone.

The fact that Netanyahu was a lone candidate for prime minister saved him from defeat. The Israeli public, which rose up against his government’s policies in the 2011 social justice tent protest, wanted a change and was ripe for a political upset, but could not find an alternative to Netanyahu in a leadership position.

Netanyahu emerged from the elections by the skin of his teeth. Having garnered only a small number of Knesset seats, he was forced to drop his alliance with the ultra-Orthodox parties and instead include Lapid and HaBayit HaYehudi Party leader Naftali Bennett in his government and hope for the best. Despite some minor humiliations along the way, Netanyahu consoled himself with the fact that he was still prime minister and that no one was really challenging his dominion.

Netanyahu’s history in recent years stems from a continuous leadership crisis that has placed him in the unusual position of being an only candidate. This is an unhealthy situation in that the political system is unable to generate an alternative.

As has been the case for the past four years, on the eve of this Jewish New Year as well, Netanyahu can look to the front, back and sideways and discover that no one is breathing down his neck — not in the Likud Party, not in the government and not outside of politics. On a really bad day, if he tries really hard, he might be concerned (as occasionally happens) with the unlikely possibility that Olmert will be cleared [of legal charges against him], will suddenly become popular and will unite the entire center-left bloc behind him. Besides Olmert, Netanyahu was recently concerned about the popular former IDF chief of staff Gabi Ashkenazi, but the attorney general’s decision to launch a criminal probe against him in the Harpaz affair has removed the Ashkenazi from the running, for the time being.

The scene in Netanyahu's Likud is equally barren. True, Defense Minister Moshe "Bogie" Ya’alon is gathering momentum as a result of his job and performance, and has been getting nice approval ratings, but he is still far from being a significant rival. The minute Netanyahu smells a change in this trend on the polling front, he will make sure to neutralize him, as he did with Moshe Kahlon, who excelled in his position as minister of communications and was the darling of public opinion.

Netanyahu is the phoenix of Israeli politics. His second term as prime minister did not leave a mark, lacking any major movement other than those that ensured his impressive political survival. Netanyahu did not make peace, he did not go to war, and he managed to extricate himself from the effects of the social protest only because there was no rival viewed by the public as worthy of replacing him.

Now, after the low ebb of recent months, Netanyahu is experiencing a resurgence. The launch of negotiations with the Palestinians, on July 30, immediately boosted his popularity ratings, and a diplomatic-defense agenda provides him with an automatic advantage as the responsible adult above all the others. On such days, Lapid and Bennett stand out in their lack of experience and ripeness. Netanyahu’s handling of the delicate situation with Syria has also earned him praise from political rivals in the opposition, including Yachimovich and Mofaz.

But it’s not just the agenda that is on his side. The indecisiveness of US President Barack Obama and of European heads of states in the face of the catastrophe in Syria has also served Netanyahu well. Given the weakness of the international leadership, his declarations about an independent attack on Iran to prevent a second Holocaust suddenly don’t seem so boastful and detached from reality. In addition to all that, one must note as well that Netanyahu emerged virtually unscathed from the austerity budget that landed on the heads of the middle class, with Finance Minister Lapid taking all the hits. It is thus no wonder that he has taken off in recent polls, once again.

On the eve of Netanyahu’s ninth Jewish New Year as prime minister (combining all three terms), one can say that the low ebb he experienced after the elections last year is behind him. At the age of 63, he is still young enough to run for a fourth term, and he does, in fact, aspire to do so, and perhaps even more than that. After Israel’s first prime minister, David Ben-Gurion, he now holds the record as Israel’s longest-serving prime minister.

Unlike Ben-Gurion, however, Netanyahu has no legacy, yet, unless one considers the “Iranian threat” a legacy. He, too, understands that a time will come when a political threat arises from the center-left. Perhaps this fear, and his deeply ingrained instinct for survival, will lead him to cross the Rubicon to a historic diplomatic arrangement with the Palestinians.