Najaf’s influential religious authorities have come out in favor of the latest round of protests and their demands, and against the government crackdown. 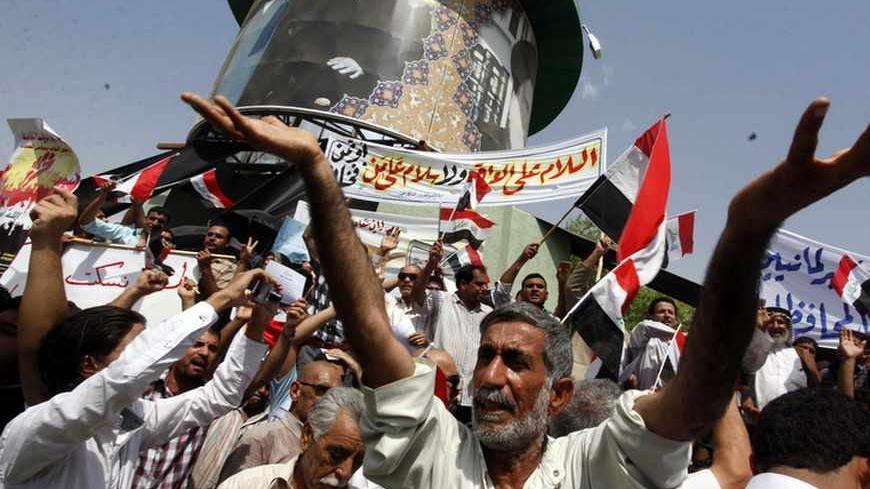 Protesters demand that the pensions of parliamentarians be canceled during a demonstration in Najaf, 160km (100 miles) south of Baghdad, Aug. 31, 2013. - REUTERS/Haider Ala

The Iraqi government has been facing huge challenges with the outburst of a public protests on Aug. 31 in several Iraqi cities. Consequently, the government had to take strict security measures to contain the movements, thus leading to the use of unjustified violence in Nasiriyah, Baghdad and other cities. These protests are considered the largest of their kind, compared to the 2010, 2011 and 2012 protests, which were subject to governmental crackdowns that left scores dead and wounded. The Najaf authorities had previously asked the government to respond to the public demands regarding the provision of services and security and the deterrence of general corruption in governmental institutions.

In previous protests and in the latest one as well, the Iraqi government resorted to religious authorities to issue fatwas that forbade participation in protests, under the pretext of tough conditions in the region and in Iraq specifically.

However, Najaf’s four authorities rejected this demand and criticized the government. The latter had previously succeeded in obtaining fatwas from figures close to Iran, including Sheikh Muhammad Mahdi al-Asefi, the official representative of Khaminei in Iraq, and Muhammad Kazem al-Haeri, who is close to the Iranian leadership. Both issued fatwas warning people not to take to the streets, thus stirring even more distress.

The government made yet another attempt, when it sent a special delegation including prominent figures in the Islamic Dawa Party and the government, like Sheikh Abdel Halim Zuheiri, special adviser to the Iraqi prime minister, and Tareq Najem, former director of the prime minister’s office. A source close to the office of Muhammad Said al-Hakim told Al-Monitor that the latter received the delegation after Grand Ayatollah Ali al-Sistani refused — a sign of anger toward the government’s constant failure and massive corruption.

According to the source, Zuheiri expressed his concern regarding the protests that are being organized by activists from several cities in Iraq and asked Hakim to assist in halting them. However, Hakim strongly opposed Zuheiri in this regard and censured the Iraqi government, asking Zuheiri, “Why didn’t you respond to the demands of the protesters instead of trying to stop protests, which are a legitimate right for everyone?”

Sistani’s official representative, Seyyed Ahmad Safi, proceeded with his criticism for the failure and corruption of the government during the Friday prayer ceremony in Karbala. Moreover, he supported the protests that were meant to be held on the following day and asked the Iraqi government to implement a clear plan to solve the situation, in case it was sincere in its attempts to overcome the current problems. Sistani had supported the demands of the protesters in the past and described them as legitimate, while asking the Iraqi government to respond to them through providing services and security and canceling any unaccepted privileges that the MPs and ministers granted themselves.

Amid the prevailing anger in the Iraqi streets and the support given to protesters from Najaf authorities, the protests are expected to continue in the coming months. Consequently, the State of Law Coalition will have fewer chances in getting enough votes to participate in the next government.