Erdogan’s silence on terror attacks in Kenya and Pakistan raises the question of whether he is taking a balanced approach in his criticism of the West. 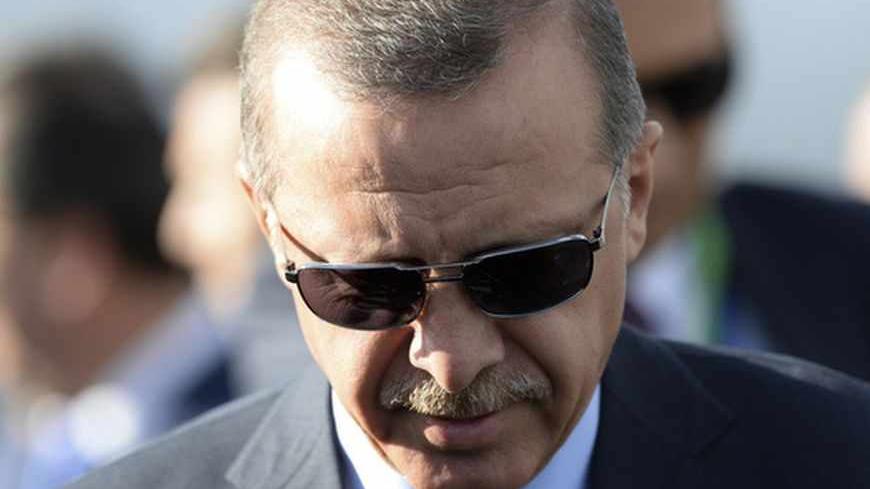 Turkish Prime Minister Tayyip Erdogan gets into a car upon his arrival a day before the G20 Summit in St. Petersburg, Sept. 4, 2013. - REUTERS/Alexei Maishev/RIA Novosti/Pool

The Turkish Foreign Ministry condemned yesterday [Sept. 23] in a written statement the attack by al-Qaeda affiliate al-Shabab terrorists on a shopping center in Nairobi, Kenya, in which at least 67 people died. Extending Turkey’s deep sorrow and sincere condolences to the Kenyan people, the statement read: “Standing against all sorts of terrorist activities, Turkey strongly condemns this attack. These kinds of terrorist attacks aim to harm the Somalia administration and its people in their determination to build a peaceful state and relationships with Somalia’s neighbors. On this occasion, we like to reiterate our solidarity with the friendly and brotherly Kenyan people.”

The Foreign Ministry also released a similar written statement yesterday condemning the terror attacks in Peshawar, Pakistan, targeting the Christian community there.  “We have learned with deep sorrow that at least 78 people lost their lives, including women and children, and more than 120 people were injured in two consecutive suicide attacks perpetrated against the All Saints Church in Peshawar, the capital of Khyber Paktunkhwa province, yesterday (Sept. 22) in Pakistan,” the statement read, strongly condemning the attack and conveying Turkey’s sincere condolences to the Pakistani people. “Turkey strongly condemns any kind of terrorist act targeting peace and security and aiming at destroying the internal stability in brotherly Pakistan. On this occasion, we express once again our strong feelings of solidarity with the brotherly government and people of Pakistan.”

Whether it was purposefully done or not, the Foreign Ministry provided on its website an English version of the media release condemning the terror attack in Pakistan, while only putting out a Turkish version for the situation in Kenya.

Separately or not, Turkish Prime Minister Recep Tayyip Erdogan took to the podium yesterday at the Asia Pacific Retail Conference and Fair and talked about Somalia’s struggle with hunger, the Israeli-Palestinian dispute, the grave situation in Syria as well as the Egyptian turmoil. While he referred to all these foreign developments within the context of the need for building a just world, he said, “A world that turns its back to the hunger in Somalia has no future. There is no future for a world where children die for a liter of petrol.” Erdogan also questioned the capability of the permanent members of the United Nations Security Council in resolving global issues that threaten the security and the safety of the international community.

“After 70 years in Egypt, the president who is elected by the votes of the 52% of his population, is brought down by a man whom he appointed as his national defense minister, by a military coup. Where is the world?” Erdogan exclaimed. “Weren’t you talking about democracy, respect for the will of the people? No one has respect for it any longer.” He also talked about his country’s aid to Syrian refugees; there are roughly 500,000 of them in Turkey. “We have made $2 billion in investment for the refugees,” Erdogan said. “We only received $135 million from abroad. We provided all the rest of the money. I thank my people for their support [of the government on this issue] because they stood strong behind their government. Surely this puts the truth in the open. This is not only a Middle East problem but also a problem of the world. We need to resolve it all together.”

While one can debate whether this was a speech suitable for an audience at a retail conference and fair, the issue is what was being omitted in the speech. Silence sometimes speaks louder than words. Turkey may still be looked up to in the eyes of some populations around the world when Erdogan raises such bold criticism of the West’s inability to address some of the key conflicts in the region. But the world has not grown more dangerous today only due to the international community’s lack of competence to address these situations. The world is also becoming a dangerous place with the increased dominance of radical, extremist jihadist terror groups who justify killing in the name of Allah as recently happened in Pakistan and Kenya. While Erdogan reminds the world community of all the women and children who have been killed in Syria, one of the 67 deceased in the Nairobi mall was an eight-month-pregnant Dutch-born Turk named Elif Yavuz. Erdogan must have a lot to say in the face of such a bloody terror attack in Nairobi that only does injustice to the peaceful name of Allah, where one of his very own citizens has also lost her life in a tragic way. Yavuz was a Harvard graduate working as an expert in the fight against malaria as a member of the Melinda and Bill Gates Foundation.

Erdogan, however, did not address the ongoing attack at the mall in Nairobi, and left it to his Foreign Ministry to release a cold written media statement in strong condemnation of this horrendous act and to extend condolences to the people in Kenya. The Turkish prime minister is a bold-speaking man, who claims knowledge of religious teachings, and takes all issues related to Islamophobia as a personal insult. One therefore could have only wished he had used this opportunity to also address the threat posed by the radical, extremist jihadists not only to the good name of Allah, but also to the economic development in terms of doing safe and secure trade and how that holds Muslim populations back. He had not said a word on that issue so far when this article was written.

In brief, Erdogan lacks balance in his approach to the troubled affairs of our world, and finds it easy to blame the West for its incompetence at times in addressing these difficult matters. However, it’s sincerely necessary for him to also take the same sharp attitude in condemning acts such as took place in Kenya or Pakistan, and for him to make it abundantly clear that such violence has no place in Islam. While his silence surely does not mean condoning such acts, it may in the end lead to confusion and a lack of clarity, which is nothing but an open invitation to trouble.