The Israeli economy loses an estimated NIS 30 billion annually because most Arabs are not being employed. 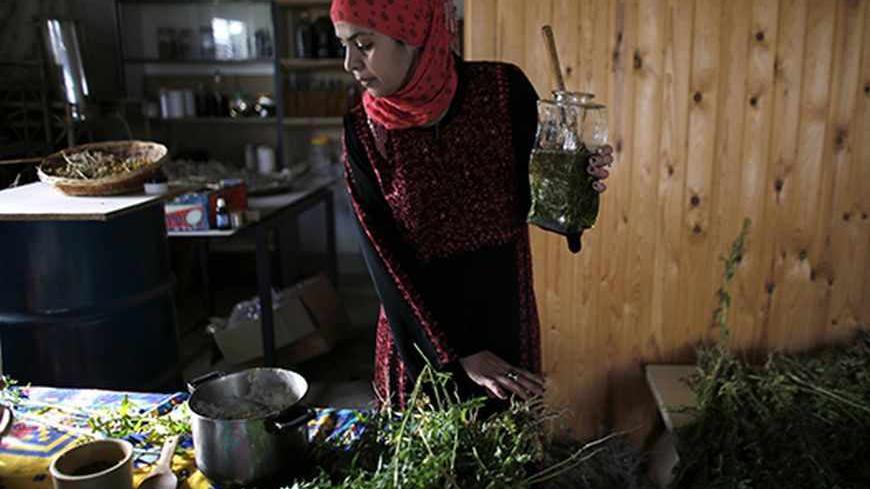 Mariam Aborkeek mixes plants with olive oil for her "Desert Daughter" soap in the Bedouin village of Tel Sheva, near the southern Israeli city of Beersheba, Feb. 11, 2013. - REUTERS/Ammar Awad

The past five years have seen an increase in dozens of percent in the number of Arab women attending universities and colleges in Israel. Currently, they outnumber male Arab graduates. Reality in Israel, however, pours cold water over this impressive figure, compiled by the Office of the Prime Minister. Despite the growth in the number of students, only 27% of Arab women are employed, compared with 74% of Jewish women.

There are a variety of reasons for this, with cultural-religious factors last on the list in terms of importance. Higher on the list are a series of objective sectorial difficulties, such as a lack of public transportation, access to urban employment areas and lack of proper training. On Oct. 29, the prime minister’s office will hold its fifth annual convention for the Arab sector. The employment challenge will be one of the main agenda items among the discussions, which will be attended by Prime Minister Benjamin Netanyahu and nearly all government ministers.

Aiman Saif, who serves in the prime minister’s office as director of the Authority for the Economic Advancement of Minorities (Arabs, Druze and Circassians), is putting the final touches on a planning dossier that includes updated surveys ahead of the conference. He has held this job for five years, since the authority was created in the final days of the Ehud Olmert government. Saif is 45 years old, lives with his wife and three children in the town of Arara in the Wadi Ara area and has a graduate degree in business administration. He got a job in the prime minister’s office in 1994, in the days of the Yitzhak Rabin government, which for the first time in Israeli history decided to allocate government positions, 80 of them at that time, to Arabs. Today, some 4,600 Arabs are employed in government ministries.

Al-Monitor: What, in your opinion, is the main employment challenge facing Israeli Arabs?

Saif: Unfortunately, the Jewish sector, especially in terms of positions for university graduates, is pretty much closed for us. Today, the participation rate of the Arab population in the labor market is 50 percent compared to 70 percent in the Jewish sector. For women the problem is bigger. Only 27% of Arab women are employed, compared with 74% of Jewish women. That’s where there's a tremendous potential for change.

We estimate that the Israeli economy loses between NIS [new Israeli shekels] 30-40 billion [$8.3–11 billion] annually as a result of the fact that Arab women are not being properly integrated into the work force.

Al-Monitor: How does Israel compare in this regard with the number of [Arab] women employed in Arab states?

Saif: The rate in Israel is low compared with Arab states in the region, where some 45% of the women participate in the work force. This figure discounts the claim that Arab women don’t go out to work because of cultural barriers. In Arab states women work at government institutions, in the health and education systems. In Israel, too, they are willing to go out to work and to integrate, but they are faced with other barriers.

There’s more awareness today in Arab society of the fact that a woman should play a more significant role in the labor market and contribute to the household income. That’s why there are many more Arab Israeli women graduating university. In addition, there has been an increase in recent years in the number of young women traveling to study in Jordan and eastern Europe. Whereas most of the young women used to study teaching, today they are looking for new professions as occupational therapists, pharmacists or doctors. Some 8,000 women teachers are currently unemployed because there are simply not enough teaching positions at the Ministry of Education.

This is at once encouraging and worrying. I’m very much afraid that we encourage them to study but when they come back, they have nowhere to work. You have to understand that every year of study abroad costs some NIS 100,000 [$27,000]. Such circumstances might breed a frustrated generation of educated people.

Al-Monitor: To what extent can the government intervene in order to improve the situation?

Saif: In many ways, that is already being implemented. In the wake of the Trachtenberg Commission [established after the 2011 social protests], a target was set for the integration of 50,000 Arab women into the job market in the next five years. It’s not simple. The problems we face are a shortage of accessible work places near Arab population centers and a lack of access to transportation. This is true for men and women, but more so for women.

How do we solve this? By developing industrial parks, improving transportation, providing organized transportation and child care facilities. These have already been budgeted, such as an investment of NIS 400 million [$111 million] in industrial zones in the Arab sector. We see constant improvement but it’s not enough because we started out at a great disadvantage. Until three years ago there was almost no public transportation inside Arab communities. A city like Umm al-Fahm, with 50,000 residents, was almost devoid of public transportation, and this was a significant barrier.

In the ultra-Orthodox sector, the rise in women’s employment is much faster because of the access to transportation and the fact that they live in the large cities, near the economic power centers. The Arab population is concentrated in the periphery in the north and south, and it’s only natural that there are fewer opportunities. In order to attain the government targets we need to create tens of thousands of jobs, and we’re not keeping pace.”

Al-Monitor: Is it possible?

Saif: Of course, but many things have to happen. One cannot rely only on transportation and day care centers. The Jewish business sector has to be more cooperative; it has to open its doors to Arab graduates. You have to look at the data in order to understand the extent of the gap. Only 2% of those employed in high tech are Arabs. It’s not because there are no Arab engineers, but because Jewish-owned companies don’t hire them. Why? Because of the recruitment system in which friends bring in their friends, because they lack employment experience, or because they didn’t serve in the military, at the 8200 unit [source of many future high-tech experts].

A change is under way now as a result of government intervention. In the past two years, the government has been providing incentives to every plant that employs Arabs and subsidizing 25% of the wage costs for two and a-half years.

Al-Monitor: Is it easier in the public sector?

Saif: We’ve made progress. Today 8% of government employees are Arabs. Here, too, we haven’t succeeded in reaching our target, which was 10% by the end of 2012. Not all government offices place the issue at the top of their list of priorities. An additional sticking point is the fact that most government offices are located in the Jerusalem area and once again, the geographic distance constitutes a barrier.”