The Hebrew University, for generations the breeding ground of Jewish thinkers, is cutting dozens of faculty positions in the humanities, succumbing to the powerful forces of the market. 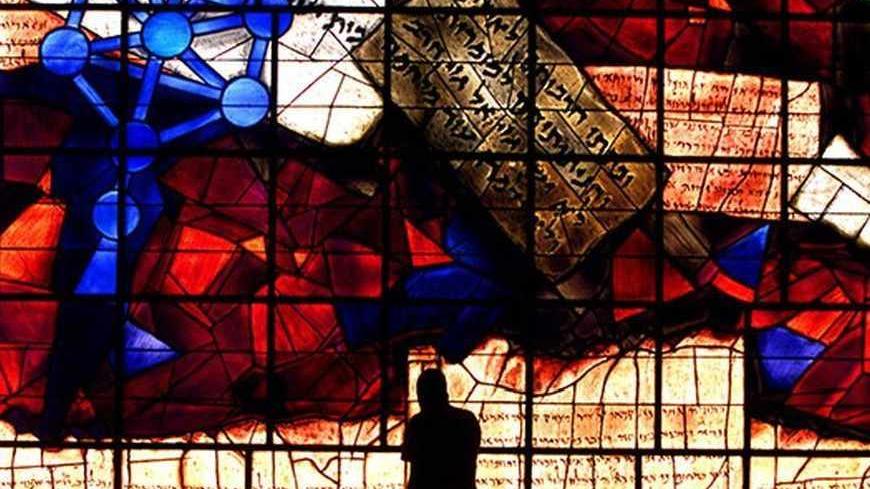 A student uses his mobile phone during a break as he is silhouetted against the "Ardon Windows" in the library of the Hebrew University of Jerusalem, June 3, 2002. - REUTERS/Yannis Behrakis

A few days from now, when students of the Faculty of Humanities enter their lecture halls at the Hebrew University, they will discover that some of their teachers have disappeared from their familiar surroundings. When they ask where they are, they will be told that the university was forced to cut more than a hundred faculty positions for teachers and lecturers due to budgetary constraints.

For years now, the academic world in Israel has been following in the footsteps of market forces, sometimes to adapt to them, often to mold the future of society. Today, high tech is the Israeli economy’s mark of distinction. Its unusual flowering sprouted from special military intelligence units that recruited the best and the brightest young men and women. On their way to achieving military superiority over enemy forces, these young people launched daring, state-of-the-art technological developments. After completing their military service, they pursued studies to advance them along the path on which they had begun in the army.

The trend became clear. Any young person who wanted to get somewhere should seek a future in the prestigious faculties whose graduates are considered prized commodities in the economic market. Thus, a clear division of labor was created in academia: sciences with economic value versus social sciences and humanities. Those who could sign up for subjects that promised economic prosperity did so; those who could not or who sought a measure of inspiration signed up for ancient Greek literature or philosophy of the biblical period.

The more the academic world came to be regarded as the road to prosperity and well-being, the more the number of students in the so-called spiritual studies diminished. Dozens and then hundreds of courses reported a shortage of students. A Hebrew University lecturer told me that he was forced to cancel his class on the separationist trends of the Jacobeans during the French Revolution because fewer than five students had signed up for it. The universities claim in their defense that the reduction in humanities courses is the result of a lack of interest on the part of students, while academics regard this trend as a dangerous reflection of market forces.

“Tremendous forces are working against the social sciences and humanities,” explained professor Yirmiyahu Yovel, one of Israel’s leading philosophers, in Haaretz on Aug. 30. “The merciless power of capitalism turns the economic-social machine into a machine that manufactures new values — which are the values of consumption, of transitory and limited enjoyment measured by money — and this is something that’s hard to withstand. The children are educated on the need to buy things and throw them away all the time; the ability to consume becomes a moral value. So why mess with Dante when you have Steve Jobs?”

The new winds are being felt by all universities, but nowhere more so than within the walls of the Hebrew University. Even before the founding of the State of Israel, “the Hebrew,” as it was known, had been renowned as the stronghold of Jewish thinkers who had emigrated from Europe. In the 1970s, thousands crowded into lecture halls to hear the historian Jacob Talmon and the philosopher Yeshayahu Leibowitz. The first won unprecedented acclaim when he talked about the totalitarian era and the second about psychophysics. The halls were crammed with people who had come to take part in the spiritual experience. Down and out laborers, science lecturers, bus drivers, lawyers, businessmen and students as well. They stood for hours in line to ensure themselves a place.

“It’s a once in a lifetime experience,” I was told by Shmuel Berkowitz, an expert on the Temple Mount who never missed a single one of professor Leibowitz’s lectures. “I never made appointments in my lawyer's office for those times. I would come as a listener, like most people, and sit entranced during the lecture. It gave our lives a meaning.”

There are those who see the decline of the humanities at Israeli universities as a sinking of Israel’s spirit. The way of the past is gone. For more than three decades, life in Israel has been under the axe of privatization, public companies transferred into private hands and the welfare state reducing services for the disadvantaged that it once served. The state is being replaced in providing welfare services by more than 30,000 non-profits that busy themselves improving the lives of the have-nots and of those stuck on the margins of life.

“There’s a kind of a paradox here,” said Rony Klein, a lecturer on French studies at the Hebrew University. “Generally it’s said that education provides a good living, but as far as humanities go, not only do these studies not provide a real income, they often result in unemployment, complete or partial, and poverty. While society tends to value subjects considered necessary, it [also] tends to devalue those it regards as less necessary. … It often portrays men of letters as dealing in nonsense. There are no more cultural heroes like in the past. In their place are business heroes, high-tech heroes, about whom one constantly hears in the media.”

Almost anyone who has ever studied the social sciences or humanities has been asked at least once, with no small degree of sarcasm, what are you going to do with this? There hasn’t always been a good answer, because in a target-oriented world, students are also required to be target-oriented. This was not what Gilad Greenwald had hoped for when he did his undergraduate degree in East Asian studies and graduate studies in diplomacy. In a kind of mea culpa published on the Israeli news site Ynet on Aug. 8, 2012, he lashed out at himself and at the state for his helpless situation.

“I was sure that once I finished my studies, I would be valued as ‘hot stuff’ in the job market,” he wrote, “that my CV and my background would be a find for any organization that would have me. In a country [that] lives and breathes current events, and an area in which diplomatic upheavals are so frequent and dramatic, one might easily think that social science and humanities graduates would be prized commodities in the job market. … You would think that anyone studying out of real interest and a search for meaning would naturally be welcome in various government agencies. But the fact is, they are not. In a country that privatizes itself into unconsciousness, the holders of these degrees have no place in the job market. There’s simply no place. Israeli companies only want those who graduated in engineering, electronics, statistics, mathematics, biotechnology. And why? Because in the state of Israel, the place reserved for humanism keeps shrinking year after year. … I wanted to work for a better society, but I didn’t succeed. … Where do I turn? My salvation will come when I abandon my aspiration to turn my country into a better state.”