The decline of humanities in Israel

The faculties of humanities in Israel have failed to adapt to the new digital era, and convince the students why humanities are still relevant in a profit-oriented society. 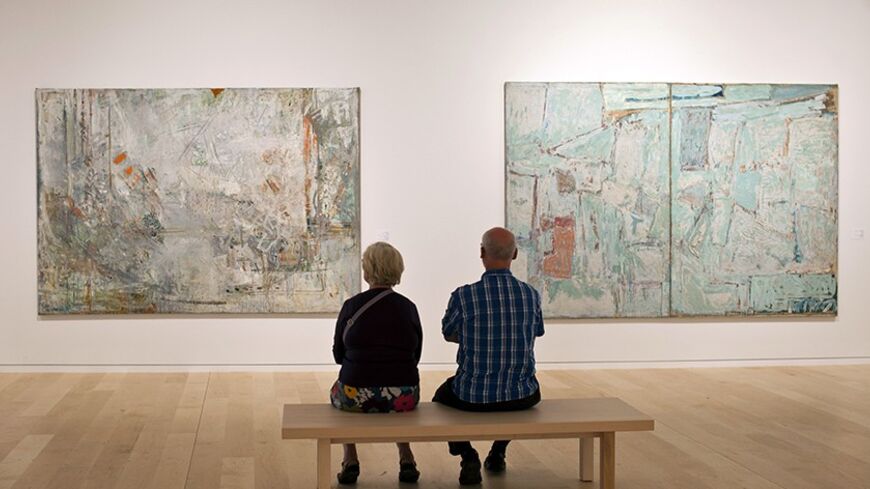 Visitors sit in front of paintings by Israeli artist Joseph Zaritsky in a new wing of the Tel Aviv Museum, Nov. 2, 2011. - REUTERS/Nir Elias

For the past few years, faculties of the humanities in the Israeli academia have been facing a serious crisis, in light of the considerable decline in numbers of registered students. According to figures provided by the Central Bureau of Statistics, over one-third of all undergraduate students in Israel were studying humanities in 2002. By 2012, that number had plunged to just one-quarter.

More current statistics released at the beginning of the academic year (October 2013) by the Council for Higher Education are even more disturbing. Only 7.5% of undergraduates now choose to study the humanities.

This downward trend has serious implications on the future of those faculties, and even on their present. In April, students at Tel Aviv University were informed that the Department of French Studies would be closed. Meanwhile, the Hebrew University of Jerusalem, which boasted just three years ago that it had received an enormous 100 million shekel ($29 million) bequest for its faculty of the humanities, has now announced that it will be slashing 20% of its junior faculty members.

Professor Michele Bokobza Kahan, who heads the department of French studies at Tel Aviv University, blames the dramatic change on two factors: the Internet and private colleges. She said, “The Internet revolution is a cultural revolution in the full sense of the term. It changed patterns of thought and behavior and our access to information. Boundaries, which were clear in the past, have become blurred. This impacts the traditional way that the humanities are studied.”

This statement points to a relatively new trend, with which the faculties of the humanities are now forced to contend.

With the Internet providing free access to vast resources of information online, consumers of information have a hard time understanding what added value formal academic studies in a university has to offer them.

Obviously, lecturers are opposed to this argument. Some even claim that while their students may seemingly be a single Google click away from the sum of human knowledge across history, they still show stunning ignorance about the most trivial subjects. As they put it, “It is impossible to look up a topic on Google, when you don’t even know that the topic exists."

In as early as 2003, however, an article published in the United States, in the Chronicle of Higher Education, caused a stir when it questioned the utility of academic studies in the humanities, compared to more pragmatic studies.

This is a very serious assertion, which leads to Kahan’s second factor: the growth in number of colleges. “While there were about 10 academic institutions 20 years ago, today there are over 60. The number of students has grown, but they are dispersed among so many different institutions. More and more want to learn practical subjects that will get them a job and earn them a living.”

A bachelor's degree in Israel is treated nowadays very much the way a matriculation certificate used to be treated before the college revolution. This led Tami Raz, head of the department of multidisciplinary studies at Sapir College in the northern Negev, to make the following subversive statement to a conference on the humanities crisis in Israel: “If an undergraduate degree is now the equivalent of a matriculation certificate, then students should at least study something interesting. The humanities are interesting.”

It seems as if this statement ignores the dramatic changes in Israeli society, which has become more capitalist over the years. Many students consider a degree to be the starting point for a more profitable career, and the faculties of humanities offer a degree that cannot assure them of that. In this sense, Israel is following a worldwide trend, which changed the old rules of the game, in which a degree was enough to ensure people a job and a higher salary. According to data provided by the Central Bureau of Statistics, the number of unemployed academics in Israel between the ages of 30 and 34 grew by almost 20% between 2000 and 2012.

It therefore goes without saying that with the world as it is, students want to stick to more practical programs, which are better suited to ensuring that they will be able to make a living.

Professor Amir Hetzroni of Ariel University in the West Bank took it a step further. In an article he published in November 2013 under the title “So You Chose to Study the Humanities? You’re not a Lost Generation. You’re a Whiny Generation,” he wrote: “Did the people who have useless degrees bother checking out the want ads before they started studying? Have they ever seen an ad that says something like, 'Oncology Department in local hospital seeking a philosopher, who specializes in Buddhism'? Investing in an academic illusion doesn’t cost 10 shekels. It costs tens of thousands of shekels in tuition and another three or four exhausting years sitting in libraries and lecture halls, years that could have been used to acquire a profession that pays, even if it’s not necessarily academic. The Israeli economy doesn’t need the 20,000 graduates in these fields who pop out of the universities and colleges every year. … Most of them will be forced to undergo painful professional retraining, which they could have skipped if they had studied basic health care or auto mechanics, which do not necessarily require an academic education.”

As far as the students are concerned, it's the faculties that are to blame for resting on their laurels, while ignoring the fact that the content they teach is becoming less and less relevant.

Kahan reacted to that same question, whether the humanities should actually blame themselves for their situation, by saying that curricula are not sufficiently updated and students are not told of how humanities can be of value even in our era.

She said: "Of course. But not only them. One cannot say that there is only one reason for that. It is a long and very complicated process. Even the adjunct academic staff is not always interested in bringing about a change, but seeks ways to be integrated and receive tenure. We all conduct ourselves in a distinct manner. There is no one specific element to blame."

On May 20, Uri Hollander, who served as adjunct professor in several universities, used the “Reading in the Books” blog to write a long open letter to Minister of Education Shai Peron in response to cuts to faculties of the humanities. In a brief interview with Al-Monitor, he listed three reasons for the current situation: Universities and colleges are quick to cut their humanities faculties rather than other, more “profitable” faculties. Over the past few years, schools have been promoting an approach that regards the student as a client, who has no obligations and of whom nothing is demanded. On more than one occasion, these students leave their institutions of higher learning just as ignorant and uninformed as they were when they got there.

Second, senior faculty never took any real interest in the fate of junior faculty members. They watched indifferently as their departments crashed and warmly embraced the approach of "apres nous le deluge" — meaning, lack of care for the next generation, and the flood can swipe away the world after we are gone.

Hollander's third point is that Israel’s right-wing governments have no interest in people who think, and getting people to think lies at the heart of the humanities. The humanities teach people to ask questions about the world they live in, and not to accept the existing situation as a given.

These opinions are not new. The extended strike of lecturers in 1994 ended by granting the senior academic staff generous benefits. At that point, the adjunct academic staff felt betrayed by the senior staff. Some even said that the senior staff "sold out" the adjunct staff, in exchange for lucre. This was expressed almost immediately by the then-new "brain-drain" trend, where young Israelis immigrate from Israel to other countries — a trend that continues to this very day. One reason among others for this is that despite the dangerous decline in such faculties also abroad, they still offered young Israelis profitable posts.

Kahan said, “The more people learn to think critically, while looking at the world and analyzing what they see, and the more objective tools and methods they have to do this, the more young people are trained to think like that, the greater the chances are that there will be serious unrest over all sorts of things that are happening in the country, in politics and in the economy. The question now being asked is whether certain representatives of society are interested in developing those sciences, which are the main basis for strengthening the individual identity of each of us.”

According to Kahan, some of the phenomena that Hetzroni mentioned in his article are the result of a loss of budgets and cutbacks of positions in the various faculties, rather than of any lack of interest among students. “People want to study the humanities. They could be offered the same kinds of scholarships that are available in the faculties of natural sciences and life sciences, or like those that are available in faculties of the humanities overseas. They could also be offered jobs in research labs investigating subjects such as literature, history and philosophy. It’s all a matter of money.”

Noa Levy, deputy chair of the Organization of Adjunct Faculty at Tel Aviv University, is studying toward a master's in law. "We are seeing a continuation of the old trend, placing greater emphasis on the exact sciences, medicine and engineering, while neglecting the humanities, social sciences and the arts. The capitalist system is imposing itself on academia. If something earns us money, we will invest in it. If it doesn’t, we won’t. That is why the number of lecturers declines every year, as does the number of available scholarships."

Kahan is convinced that change is possible. "People in the humanities can come up and create some way to integrate into our world of today, which keeps changing. The humanities are not dinosaurs. People can and should adapt to the new reality and get used to it."