There are lessons for Israel in the Syria war. 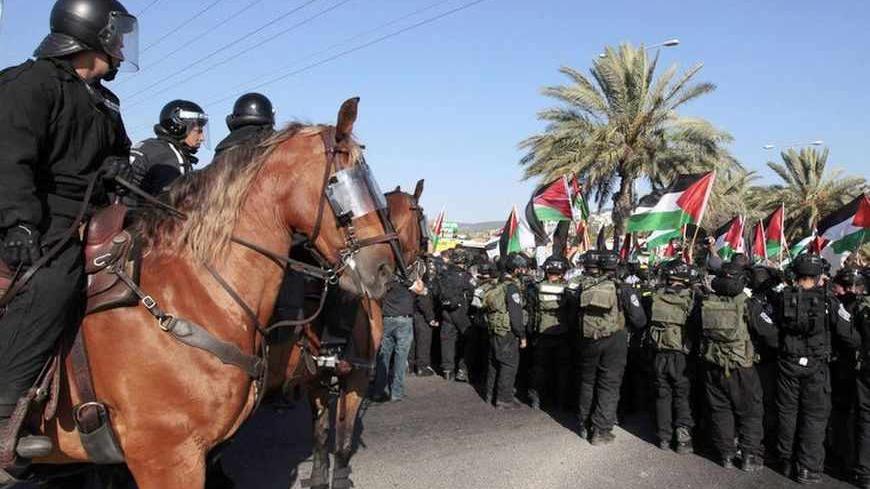 Israeli mounted policemen guard as Israeli-Arab protesters wave Palestinian flags during a demonstration to show their solidarity with Bedouin citizens, in the Israeli-Arab town of Umm el-Fahm, Aug. 1, 2013. Hundreds demonstrated against an Israeli cabinet plan to relocate some 30,000 Bedouin citizens who live in unrecognized villages in Israel's southern Negev desert and relocate them to towns built by the government. - REUTERS/Ammar Awad

The flood of criticism against the inaction of the Obama administration in light of the bloodshed in Syria reminds me of a fascinating conversation I conducted a year ago [Aug. 13, 2012] with retired Canadian Gen. Charles Bouchard, who had ended his term as deputy commander of NATO several months earlier. Bouchard has been lauded for leading Operation Odyssey Dawn in March 2011, which brought about the fall of the Moammar Gadhafi regime in Libya.

I asked the general to assess the possibility that the West would use military force in Syria as well to end the bloody civil war. His answer is worth noting: “The violence in Syria is completely different from that in Libya when NATO headed Operation Odyssey Dawn,” Bouchard said unhesitatingly. He explained that the success in Libya stemmed from NATO's not introducing ground forces, whereas the geography and political instability of Syria mean that a battle in that country could not be fought exclusively by air. On the other hand, the general noted, an aerial strike could result in the loss of many lives and turn the nations of the region against the West.

He said former Libyan leader Gadhafi’s people had quite often found refuge in water installations, hospitals and mosques — which hampered the pilots’ actions since they had been instructed to avoid damaging those installations at all cost. “We were thinking of the day after. We were in Libya to defend civilians and if you destroy everything, on the day after you’ll have to do everything in order not to make the citizens miserable,” Bouchard said. “If you’re unsure, don’t do it.”

Bouchard pointed to another difference between the case of Libya and the crisis in Syria. While Gadhafi only had the support of marginal leaders, like Venezuelan President Hugo Chávez and Zimbabwe’s ruler Robert Mugabe — Syria is supported by Iran, Russia, China and Hezbollah. What’s more, the opposition in Libya was prepared to seize power, while the ouster of President Bashar al-Assad in Syria could result in total chaos. Therefore, Bouchard said, Syria’s problem is more similar to the chronic crises in Iraq and Afghanistan, which required long-term international intervention, than the speedy aerial resolution in Libya.

External intervention that results in the ouster of the murderer from Damascus and his trial for war crimes will provide justice for the Syrian people and might even place Syria on the right path. But, as can be gleaned from the experience of Iraq’s and Afghanistan’s citizens, this road can be long and bloody.

An aerial strike and even an invasion of ground forces will not erase in one stroke the ethnic-religious enmity of decades between the Sunni majority (74% of the population) and the Alawite (11%) and Christian (10%) minorities. Add to this the meddling of global jihad in the country, the infrastructure destruction and a severe economic crisis. The case of Syria teaches us that an artificial bridge connecting ethnic groups with a history of conflict and unresolved disputes can be fragile and dangerous.

Such shaky bridges took a bloody toll not just in the Middle East and the “problematic” Muslim world. In the very heart of “enlightened” Europe, people carried out unspeakable acts against their longtime neighbors, too. Some 20 years ago, 100,000 people were murdered in the Balkan wars, when, among other things, Serbia sought to maintain its rule of Bosnia by cleansing it of Bosnians. After the disintegration of Yugoslavia, Kosovo, with its Albanian population, broke away from Serbia. It was followed by the more than 600,000  residents of Montenegro, who decided to establish an independent state seven years ago.

We Israelis needn’t look far to see the ethnic-religious tensions threatening our society. The top-rated television series “True Colors” of journalist Amnon Levi, broadcast during August on Israeli TV channel 10, brought the rage to the surface and exposed the baggage of hatred which many of the Jews who hail from the Middle East and North Africa feel toward the Ashkenazi Jews of European origin.

Zion Amir, the successful lawyer, predicted that the ongoing discrimination of “Eastern” Jews will result in an eruption of violence. At the same time, leaders of the ultra-Orthodox community are threatening nothing less than civil revolt if their youngsters are forcefully drafted into the army. Other state-funded rabbis are calling on soldiers to disobey any order to vacate settlements, and groups of zealous settlers are threatening to take up arms if the government orders their evacuation within the framework of a peace agreement with the Palestinians.

In addition to all these tensions, the Israeli establishment, and especially the incumbent Knesset, is incessantly seeking to stress the Jewish nature of the state, thereby excluding the Arab, mostly Muslim minority, which constitutes one-fifth of the population. What happens if the two-state solution fails and this minority, which has been suffering semi-official discrimination for 65 years, becomes a majority in a binational state?

In a lengthy article published last year [summer 2012] in the periodical of the Tel Aviv University political science department, The Public Sphere, historian Alexander Yakobson wrote that no binational or multinational state established in the 20th century has lasted for long, and their disintegration usually took a heavy toll. As Yakobson contends, it’s hard to believe that after some 100 years of a bitter national dispute, the Arab-Palestinian majority in the state that replaces sovereign Israel will be willing to give up the Arab nature of this future state.

A state with an Arab majority at the heart of the Arab Middle East, where all states are officially defined as Arab, “will, if established, be an Arab state for all intents and purposes and not a binational state, regardless of what the constitution written upon its establishment will state,” Yakobson notes.

On the other hand, it’s unlikely that the large Jewish minority will give up its hegemony, anchored in the Zionist idea and its self-determination. At this point, the suicide attacks by Hamas, the 1994 massacre of Hebron Palestinians carried out by a Jewish doctor in the Cave of the Patriarchs, the ''price tag'' phenomenon, the theft of lands and racist incitement — all these will seem like trailers for the bloody events in “Isra-tine,” the name proposed by that “well-known peace lover” Gadhafi for a binational state between the Mediterranean and the Jordan River. The tragedy besetting Syria should serve as a warning to Israelis struggling against division of the land and believing that different people can live together in harmony under one roof.