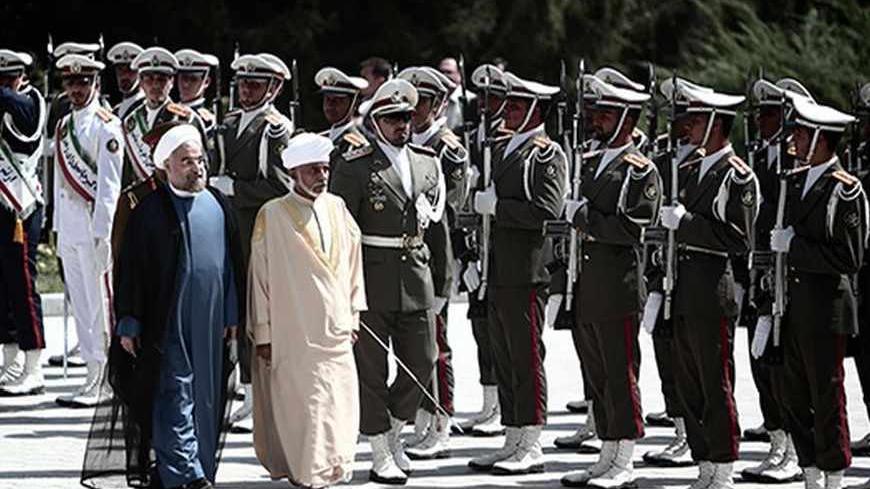 What was the sultan of Oman doing in Tehran? Many answers might emerge to this question, despite the fact there is one main answer that an Iranian source gave. “Sultan Qaboos is a close friend to Iran; before and after the revolution ties stayed strong between Muscat and Tehran,” the source said, adding, “Now as in 1999, the sultan has an initiative to bridge the gap between Iran and the West, and its Arab neighbors.”

Back in 1999, then-President Bill Clinton sent a letter via the Omanis to Iran’s then-President Mohammad Khatami. Clinton was a Democrat, as is President Barack Obama, and Khatami was a reformist, as is President Hassan Rouhani. Back then, the reconciliation efforts failed despite all the optimism filling the air, and later on hopes of peace turned into fears of war, with the assumption of power of Presidents George W. Bush [2001-2009] and Mahmoud Ahmadinejad [2005-2013].

Sultan Qaboos discussed several issues with the Iranians, in addition to having a certain message to convey, the Tehran source said. “Despite denials, the sultan had an initiative for Iran to decrease the level of uranium enrichment in return for the West observing Iran’s right to enrich [uranium] and easing financial sanctions.” The source added that the Iranians promised to consider the initiative carefully, although they had serious doubts that such a step would solve the problem. “It’s hard to arrive to terms with the West on one file while others are still on hold — the war in Syria is one, Israel, the relations with America,” the source said. The source added, “We welcome any attempt, and we are interested in tackling all the problems, but not by giving up our people’s rights.”

The Omani leader’s visit came in conjunction with the surprising appearance in Tehran of UN Undersecretary Jeffrey Feltman (a former US assistant secretary of state and ambassador to Lebanon) to meet with Iranian officials and discuss the situation in the region, mainly the war in Syria. With both guests in Iran, eyes and ears were directed toward Tehran to understand the developments, and to try to get some clues of what’s happening backstage.

According to well-informed sources in Tehran, the American UN official who used to be one of Tehran’s most active foes in Lebanon had two messages to deliver, both connected to each other, and both on Syria. His first message was on the Geneva II peace conference on Syria and the other related to Geneva II but seemingly an American message. “Feltman suggested that Iran can play an important role in ending the crisis in Syria, given its strong ties with Syrian president Bashar Assad,” the source said. “The Iranians mentioned their six-point initiative for peace in Syria, and Feltman listened carefully and gave some remarks. Still, the meeting was cold; this was the first time Iranians had held indirect talks with the Americans directly, like it or not — Feltman is here as a UN official and as an American.”

The UN’s Feltman stressed the importance of Iran’s participation in Geneva II, but the Iranians were still waiting to hear what the US’s Feltman would say. It was only during the third and last session that he spoke about the use of chemical weapons in Syria; here the Iranians stated that they were 100% sure it was not the Syrian regime and that there was evidence to prove that. “There are satellite images and pictures that prove Assad has nothing to do with this condemnable crime; to prove his good will he gave access to the international fact-finding commission to investigate the claims and give its verdict,” the source said. The source added that Feltman warned that a successful Geneva II should be preceded by the restoration of a balance of power, and that Iran should understand the importance of this for the greater goal of bringing peace back to Syria. “The Iranians understood that Feltman was calling on them to stay calm if there were strikes on Syria,” said the source, who said that Feltman used a very diplomatic rhetoric, and that “the Iranians responded in a similar manner: ‘Mr. Feltman, if you’re serious about the success of Geneva II, you have to visit Damascus.’”

Ali Hashem is an Arab journalist who is serving as Al-Mayadeen news network's chief correspondent. Until March 2012, Ali was Al Jazeera's war correspondent, and prior to that he was a senior journalist at the BBC. Ali wrote for several Arab newspapers, including the Lebanese daily As-Safir, Egyptian dailies Al-Masry Al-Youm and Al-Dostor, the Jordanian daily Al-Ghad, and also contributed to The Guardian.