North Sinai is witnessing a breakdown of law and order amid violence and bombings. 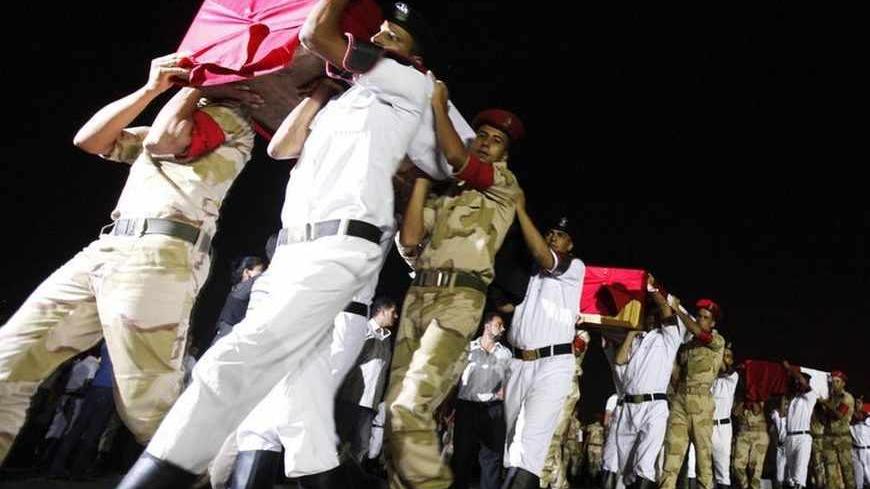 The caskets of 25 policemen killed near the north Sinai town of Rafah are carried after arriving at Almaza military airport in Cairo, August 19, 2013. - REUTERS/Mohamed Abd El Ghany

North Sinai — As hundreds of people jammed the weekly Tuesday market in the middle of volatile Sheikh Zuwayed, several men armed with high-caliber machine guns and rocket-propelled grenades took up positions in houses with strategic views of the town's infamous police compound. They then proceeded to barrage the heavily guarded building with rockets and bullets, setting their crosshairs on Egyptian security personnel ducking behind sandbags on the rooftop.

As the security forces exchanged fire with the attackers on the town's main boulevard, a vehicle loaded with explosives raced across the main square and into the massive, steel front gate of the compound. A deafening explosion destroyed the gate, an armored vehicle stationed behind it and parts of the compound wall. The widows of dozens of neighboring houses shattered, and the fronts of some 30 shops lining the opposite side of the street were destroyed along with part of the mosque beside the compound. Miraculously, only four bystanders were injured.

“The explosion shook our house, a few hundred yards away from the police station. It was frightening,” Ali Mohamed, a resident of Sheikh Zuwayed told Al-Monitor. “Now we are afraid to even walk around, and we never step foot on the main road.”

The Aug. 27 attack was the first suicide mission to target a security facility in Egypt's most volatile region, which borders Israel and the Gaza Strip. It is the latest, however, in a string of deadly assaults targeting military and security personnel in north Sinai since Egyptian Defense Minister Abdel Fattah al-Sisi announced the ouster of President Mohammed Morsi on July 3.

Since the attack, Sheikh Zuwayed's main street has been off-limits to everyone, including the town's residents. Traffic has been rerouted onto side streets and the main square sealed off by concrete blocks and barbed wire. Dozens of shops remain closed for fear of possible gun battles erupting around the police compound.

Neither the Defense Ministry nor the Interior Ministry has issued an official statement regarding the attack. On Aug. 28, however, the state-owned Middle East News Agency (MENA) reported the “arrest of 12 people suspected of involvement in the attack on the Sheikh Zuwayed police compound on Tuesday.”

A month earlier, on July 28, a sedan loaded with homemade bombs and four armed men had exploded on its way to the al-Sabil natural gas pipeline control chamber located seven miles southwest of al-Arish. All four men were killed in the blast, which apparently thwarted their planned attack on the chamber only yards from where they died. Nevertheless, the incident was a clear signal of how relentless the heavily armed militants in Sinai have become in their war on Egypt's security forces.

“Clearly, the security forces are incapable of stopping whoever is attacking them,” a Sinai government employee told Al-Monitor. Requesting anonymity, he confessed, “I don't want to get in trouble with either the militants or the authorities.”

“The sophistication of the Sheikh Zuwayed attack and the planned distraction while the suicide bomber hit the police compound shows the power and intelligence of the attackers and how effective, or weak, the security operations are,” the employee noted. “The intensity of extraordinary security measures rises with increases in attacks, and residents of north Sinai feel that their suffering under harsh security measures is in vain. They aren’t sympathizing with the police or the military anymore.”

Egypt's military and police forces continue to suffocate north Sinai with exceptional security measures. Despite moving the start of the nationwide curfew from 7:00 p.m. to 9:00 p.m., in the border towns east of the Mediterranean port city of al-Arish, its enforcement begins at 4:00 p.m. and includes a shoot-to-kill policy around checkpoints and security facilities.

Ten people have been reported killed and several others injured by random fire from checkpoints in al-Arish and Sheikh Zuwayed in the past two weeks. No official reports have confirmed or denied the numbers or incidents, but dozens of north Sinai residents insist that commuting after 4:00 in border towns and on highways has become extremely dangerous and at night is suicidal.

On the evening of Aug. 27, some 50 private vehicles, transport buses and trucks carrying more than 200 people were stranded for several hours at a checkpoint a few miles west of al-Arish. The military personnel at the checkpoint blocking the only road into the city refused the pleas by families trying to reach their homes before the curfew took effect.

“What if attackers start shooting at this checkpoint now?” asked Hassan Mahmoud, a 24-year-old driver. “They are forcing us to break the curfew, putting our lives in danger, yet they expect us to respect them.”

Mahmoud, who lives on the eastern side of al-Arish, told Al-Monitor that guards at another checkpoint on the way to Sheikh Zuwayed had fired warning shots as he drove toward it at noon on Aug. 25.

“I stopped and they approached with their guns pointing at me and forced me to turn around and drive back,” said Mahmoud. “When I complained to the officer, he threatened that the next bullet would hit the car, and the one after would hit me.”

Mahmoud said he once sympathized with security personnel when hearing about attacks against them, but that has changed. He explained, “Since this security humiliation started we don’t care about them anymore.”