A suicide bombing and overall violence has led to fear among Sinai residents of what comes next. 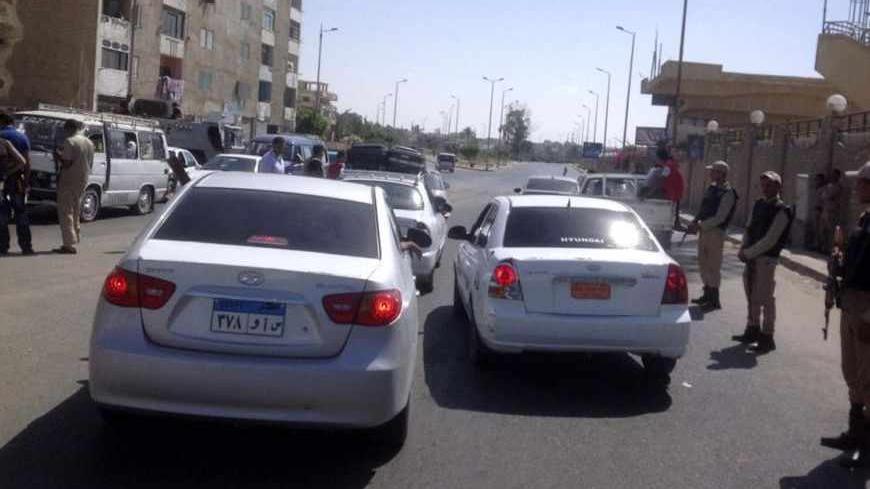 SHEIKH ZUWAYYED, North Sinai, Egypt — On Tuesday, Aug. 27, North Sinai witnessed its first suicide attack that targeted Sheikh Zuwayyed's police compound. Despite being accustomed to echoing gunshots and explosions around their restive community, residents of the town and its surrounding Bedouin villages were shocked by the devastation and fear what is to come.

Egyptian security authorities offered few details regarding the attack, which is seen as a major development in the tactics and momentum of Sinai's militant groups that have unleashed an uninterrupted chain of attacks on police and military checkpoints and facilities over the past seven weeks.

The attack on the town's bustling market day was witnessed by hundreds of unfortunate civilians either caught in or on the periphery of a deadly, prolonged battle between unidentified assailants and security forces. A few of the witnesses talked with Al-Monitor but insisted on concealing their identities.

Essam Saeed, a resident of Sheikh Zuwayyed, left his house around 9:45 a.m. heading to a tea shop 150 yards from the town's main square. Behind him stood the massive police compound and a side street jammed with people en route to the town's famous Tuesday market, which attracts hundreds of people from surrounding villages.

"Looking out of the tea shop's gate, I saw three men climbing up a building that was under construction yards from where I sat; it was around 10 a.m. One carried an RPG, the second carried a machine gun and the third carried a large video camera. They wrapped scarves around their faces and wore olive-green camouflage pants." Saeed told Al-Monitor at his house in Sheikh Zuwayyed. "It was clear they were about to shoot."

"It's not the first time I witness shooting, and the best thing to do is to find a safe spot, and hide," Saeed recalled; he said he darted out of the tea shop to find refuge from the looming firefight. "I ran into a mechanic’s shop steps away from the tea shop. Others had also seen the armed men; we all started screaming at people to take cover."

Dozens of people ran in every direction, into shops, into entrances to houses and into side streets to take cover behind buildings and cars.

Other residents of Sheikh Zuwayyed witnessed groups of three to four men in different spots. The stories told to Al-Monitor and to several local reporters showed that there were four groups positioned on four different buildings, two in the wider residential block viewing the front walls and facade of the police compound, one at the far western edge of the block and another beyond the main square to the east, where Saeed happened to be minutes before the attack. The group he witnessed was the only one carrying a camera.

"We heard one shot fired from the building almost above our heads," said Saeed, "Seconds later, heavy gunfire echoed all around us."

"Recalling the events, and hearing the stories from neighbors and friends who saw the other armed groups, I believe the first single shot was a call for all groups to start the attack, and they all did immediately after that one shot."

Saeed's refuge faced the building where the attackers had climbed earlier, but the side street was too narrow for him to see them on the third floor of the hollow, wall-less concrete skeleton.

Abdullah Ali, another witness, was at the market located north of the police compound and behind the attack line formed by the four armed groups.

"Everyone on the northern side of town, opposite to the police station, ran toward the market. It was total chaos," said Ali, "Everyone feared the bullets fired in our direction from the security forces. We weren’t too close but were still in front of the police compound, and behind the attackers."

Minutes later, a suicide bomber detonated a sedan loaded with explosives in front of the police compound's main gate. The explosion rocked the whole town and shattered the windows of dozens of houses and ripped off the front doors of shops all around the targeted police building.

"We felt the building shaking as the massive explosion echoed," Saeed continued, "and the armed men walked out in front of us almost one minute after the explosion."

"They were broad-shouldered, confident men; they walked out in front of at least 50 people and didn’t even look behind them. One man cursed at them as he ducked beside a wall; they didn’t even look at him. They just walked away."

Several military armored vehicles arrived at the main square minutes after the explosion. And as they spread into various side streets cutting through houses on the northern side of town, the firefight came to an end. The attackers were said to have melted into the market crowds, and their cars drove off amid dozens of cars fleeing the deadly perimeter.

Luckily, the only apparent fatality was the suicide bomber, although there were some injuries.

Saeed and Ali agreed that no one would dare describe the vehicles that carried the attackers away. "They would first be detained for questioning, which is always humiliating, and would be in danger if they were ever released," said Saeed.

But it wasn’t long before security forces started the detentions. Both military and police personnel surrounded the main square, a part of the residential block viewing the police compound and four government offices surrounding it including the education department, a local clinic, the electricity company and the town's administration building.

Hundreds of civilians were led inside the police compound. They were stripped of their phones, wallets and ID cards. Everyone was asked one question: What did you see?

"It was disgusting; some of those detainees were pregnant women who happened to be at the clinic," said Saeed, who added that he was lucky to have been far from the security cordon and that he wasn’t detained.

Security forces released the detainees at around 3:30 p.m.

As for the suicide bomber, shreds of his body were found all around the main boulevard, in the yards and on the rooftops of the government buildings close to the police compound.

Judging by the intensity of gunfire coming from the police compound during the battle that continued for almost 30 minutes, Saeed believes that the bomber's car was parked close to its target.

"The security personnel, who fired from the rooftop and every window of the police compound, would have easily spotted the car if it raced in from a distance; I believe it was waiting in the square right in front of the building, and moved as the chaos began."

Mohamed Hussein was among hundreds who ran for cover when the shooting began.

"I was in front of the police compound when I heard the gunfire," said Hussein. "The exchange of fire between policemen and the attackers was three floors above street level, which gave everyone a chance to escape. I took cover behind the houses facing the compound."

"In less than two minutes, the street was empty. People fled into every side street and building around them," added Hussein, who said that dozens would have been killed if the battle had taken place on the ground level. "It was the town's busiest day."

"We will wait for a film to appear with more details, we now know they documented their attack," said Hussein.

Editor’s note: Names of the witnesses were changed to protect their identities.