Hassan Rouhani took the oath of office on Aug. 4 as Iran’s 11th president and repeated pledges to try reduce Iran’s isolation and relieve its economic distress. 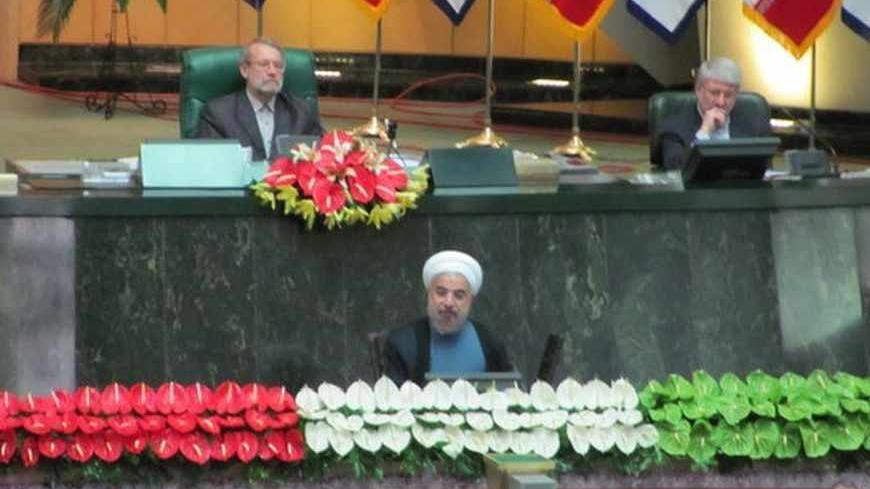 TEHRAN, Iran — Iran’s new president, Hassan Rouhani, addressed twin appeals on Aug. 4 to a suspicious international community and his own beleaguered people, promising to seek detente with the former and act on behalf of the latter, including those who did not vote for him or even vote at all.

Rouhani, a 64-year-old cleric partly educated in Scotland, took the oath of office before the Iranian parliament, then delivered a crisp address that sharply contrasted with the pseudo-philosophical meanderings of former President Mahmoud Ahmadinejad.

The Iranian people “want to live a better life, be dignified … [and] reclaim their deserved status among the nations,” Rouhani told the audience, which included a sprinkling of presidents and prime ministers from neighboring nations and pariah states such as North Korea, but no senior serving Western officials.

“My government will endeavor to build effective and mutual confidence between Iran and other countries in the world,” he said.

The Obama administration released a statement timed to Rouhani’s inauguration that suggested a willingness to reciprocate the more constructive tone emanating from Tehran. Press secretary Jay Carney said that the US government congratulated the Iranian people “for making their voices heard” during Iran’s presidential elections on June 14. While prodding Iran “to act quickly to resolve the international community’s deep concerns over Iran’s nuclear program,” the statement continued: “Should this new government choose to engage substantively and seriously to meet its international obligations and find a peaceful solution to this issue, it will find a willing partner in the United States.”

Rouhani elicited applause from the audience when he promised to “engage in dialogue” with other nations on a basis of “confidence-building, mutual respect, common interest and on equal standing.

But he also warned adversaries — without naming them — that “if you seek a suitable response, you should talk to Iran in the language of veneration and respect, not the language of sanctions.”

Overall, however, the speech was distinctive for its brevity and lack of cant, especially its acknowledgement that after 34 years of increasing isolation and pressure, the Iranian system is not universally beloved at home.

The new president also presented to parliament a list of cabinet nominees including Mohammad Javad Zarif, a US-educated former ambassador to the United Nations, as foreign minister.

Zarif, 53, is — for a senior Iranian official — unusually familiar with Washington's political elite including Vice President Joe Biden and US Secretary of Defense Chuck Hagel, whom Zarif met when both were in the US Senate. Zarif visited Washington during his posting in New York from 2002 to 2007, and he was a pivotal figure in drafting a 2003 agenda for comprehensive talks between the United States and Iran — a so-called “grand bargain” outline that was transmitted to the State Department by Swiss diplomats but was rebuffed by the George W. Bush administration.

A sophisticated man with a doctorate in international law and policy from the University of Denver, Zarif seemed offended by Ahmadinejad’s annual shenanigans at the United Nations and retreated to academia for the bulk of Ahmadinejad’s tenure. Assuming he is confirmed by the Iranian parliament, Zarif would be well-placed to reach out to the United States to try end the deadlock in the nuclear negotiations and repair Iran’s frayed relations with Europe. Another potential envoy is Mohammad Nahavandian, a US green card holder and former head of Iran’s chamber of commerce who was named chief of Rouhani’s presidential office — a post that does not require parliamentary approval.

Other Rouhani choices are less well-known internationally such as Culture Minister-designate Ali Jannati, the son of the hard-line head of the Guardian Council, Ayatollah Ahmad Janati.

All the cabinet appointees were presumably cleared in advance with Supreme Leader Ayatollah Ali Khamenei who on Aug. 3 urged Iran’s various political factions and institutions to “come and help” the new president.

However, there are concerns that elements to the right of Rouhani may try to sabotage his presidency. One early and ominous sign came on Aug. 2, when Iranian media initially mistranslated Rouhani's remarks as saying that Israel was a “wound” that needed to be “destroyed.” In fact, what Rouhani said, on the occasion of Quds Day — an annual event in Iran to show solidarity with the Palestinians — was that Israel was “a sore [that] has been sitting on the body of the Islamic world for many years.”

The game of musical chairs at the top of Iran’s political elite has produced a range of reactions in both the United States and Iran. While some believe he can achieve a breakthrough, others fear that Rouhani will merely present a more attractive face for an authoritarian system at odds with Iran’s population and much of the international community on issues ranging from the nuclear file to human rights.

House Intelligence Committee Chairman Mike Roger’s told Al-Monitor Editor and CEO Andrew Parasiliti last week, “I think there is a lot more marketing going on than there is reality in his [Rouhani’s] position on Iran’s negotiations on Iran’s nuclear program.”

In Tehran, meanwhile, a 20-something architecture student, who spoke on condition she not be named, told Al-Monitor on Aug. 4, “Nothing will change” under Rouhani. “You [the foreign press] are more interested in him than we are.”