Iran’s New President Side Steps Questions About Talks With US 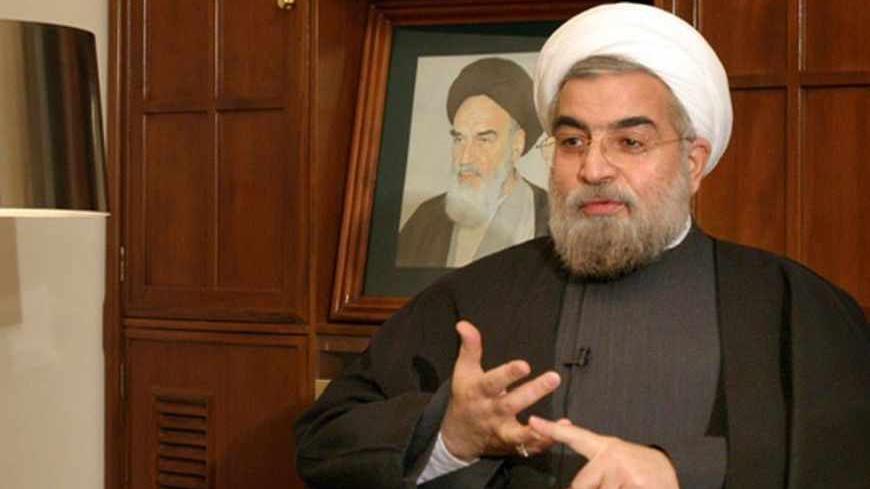 TEHRAN, Iran — If Hassan Rouhani is going to endorse direct talks with the United States, he gave no hint of it on Aug. 6 in his first press conference as Iranian president.

Pressed by foreign and local reporters to clarify his position on negotiations with the United States and on the nuclear issue, Rouhani resorted to generalities — saying he supported dialogue and a “win-win” resolution — plus veiled accusations against Israel for allegedly imposing its views on the United States.

The newly minted president’s caution is understandable given the fact that he was inaugurated only two days ago (Aug. 4), and that parliament must confirm his cabinet — which includes a half dozen US-educated technocrats and veterans of prior reformist and centrist governments. Already, there has been sniping from hard-line columnists that some of the nominees backed opposition candidates Mir Hossein Mousavi and Mehdi Karroubi in the disputed 2009 elections. Both men have been under house arrest for more than two years, and the wounds left by those elections have yet to heal.

Rouhani’s remarks also reflected pique and disappointment that US President Barack Obama has so far not formally congratulated Rouhani on his election on June 14. Instead, the White House and State Department have repeatedly congratulated “the Iranian people” for their large turnout and surprise support for Rouhani, the least hard line among the six candidates running.

Even a relatively conciliatory statement on Aug. 4 by White House spokesman Jay Carney “shows some US officials still do not have an appropriate correct understanding of this election and the nation of Iran,” Rouhani said.

A diplomat in Tehran, who spoke to Al-Monitor on condition of anonymity, said the United States had missed an opportunity by failing to congratulate Rouhani on his win.

“People in the [Iranian] Foreign Ministry would have liked a simple, clear statement from Obama congratulating Rouhani on this election,” the diplomat said. “Had he [Obama] done that, there would have been the possibility to have American guests here,” at Rouhani’s inauguration.

At his press conference, Rouhani noted that representatives of 55 nations had attended the ceremony in parliament on Aug. 4, where the new president took his oath of office. The high-level guests, however, were mostly from neighboring countries or pariah states such as North Korea. The only prominent Westerner attending was former European Union high-level representative for foreign affairs, Javier Solana.

Rouhani circumvented questions about whether he would like to meet Obama or would be attending the UN General Assembly in September — an event that his predecessor, Mahmoud Ahmadinejad, never missed.

Asked by Al-Monitor whether he would endorse direct talks with the United States given the failure of multilateral negotiations to make headway on the nuclear dispute over the last few years, Rouhani said, “I don’t think the negotiations have failed but the desirable result has not been achieved.” He said Iran would return to the P5+1 talks, and “we’ll have more clear, more serious and more frank negotiations.”

Rouhani has yet to name a new negotiating team and side stepped questions about whether Iran would modify its nuclear proposals. Instead, he repeated pledges to show more transparency and address international concerns that Iran’s program could give it the ability to make weapons.

Rouhani also repeated remarks slamming the “dual track” policy of sanctions and negotiations long followed by the Obama administration. “This dual track would lead them to nowhere,” he said.

The press conference was a lively affair attended by scores of Iranian reporters, many of whom were frustrated by the fact that they did not get a chance to pose questions. Rouhani, unlike Ahmadinejad — who would answer questions until reporters were exhausted — only extended the scheduled one-hour-long conference by about 10 minutes.

A veteran of the Iranian system, Rouhani is likely to remain cautious until his team is in place. Unlike former President Mohammad Khatami, Rouhani has given no interviews to US or other Western journalists.

Many Iranians who spoke to Al-Monitor over the last few days have expressed skepticism that Rouhani can alleviate the economic mess bequeathed to him by Ahmadinejad’s administration.

Clearly, however, Rouhani takes the responsibilities he has just assumed seriously and understands the economic and diplomatic hole dug by Ahmadinejad over the last eight years.

His priority, Rouhani has said repeatedly, is the economy, and he has also promised to be honest with Iranians about the depth of the crisis. His government, he pledged on Aug. 6, will be “responsive and responsible …There is no treasure more valuable than the trust of the people.”