As long as Palestinians consider the conflict with Israel as an existential question — denying Jews the right of their own state — there can be no solution based on land repartition. 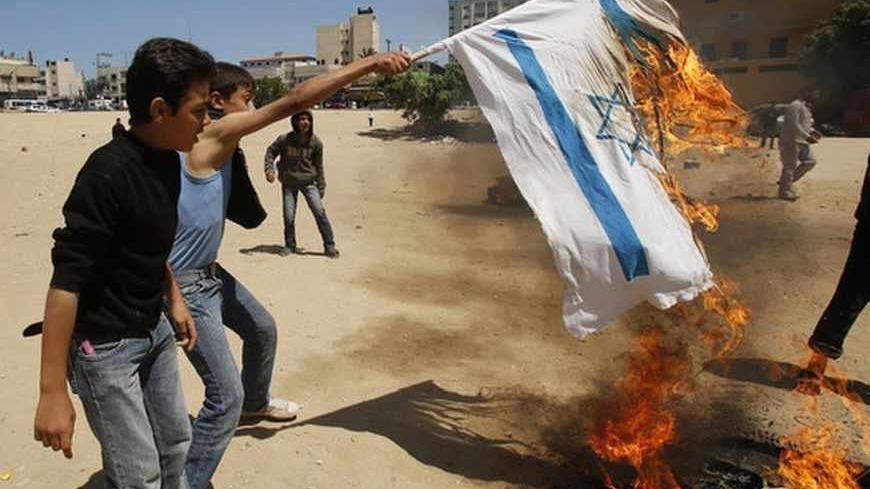 A Palestinian boy burns an Israeli flag as he performs a scene simulating clashes with Israeli soldiers, in solidarity with Palestinian prisoners held in Israeli jails, in Gaza City, April 14, 2013. - REUTERS/Suhaib Salem

As Israeli and Palestinian negotiators begin a new round of talks, one question will hover in the air: Is there an agreement to be made? Some will express hope. Most will express skepticism. But to answer this question, one must delve deeper into the far greater question of the root cause. We need to know what we are fighting over. What are we killing and being killed for? To attempt to resolve the conflict, we must first know its essence.

The key question is whether at its core, the conflict is rational or existential. A rational conflict is about resources and their fair division.

If our conflict is rational, then it emerges from the simple fact that two peoples live on one land, and therefore need to find a way to share it. A rational conflict should be amenable to rationally negotiated solutions, based on the principle of partition — dividing the land between two states, one for each of the two peoples, one Jewish, one Arab — as has been the governing theme of all negotiation efforts since 1937. Sooner or later, such a solution should bring peace and an end to the conflict.

But increasingly, Israelis, myself among them, have come to wonder whether the essence of the conflict is quite different — not rational, but existential. Is the conflict about the very existence, rather than the size, of the state of Israel?

On Feb. 18, 1947, British Foreign Secretary Ernest Bevin, not an ardent Zionist by any stretch of the imagination, addressed the British parliament to explain why the UK was taking “the question of Palestine,” which was in its care, to the United Nations. He opened by saying that “His Majesty's government has been faced with an irreconcilable conflict of principles.” He then goes on to describe the essence of that conflict: “For the Jews, the essential point of principle is the creation of a sovereign Jewish state. For the Arabs, the essential point of principle is to resist to the last the establishment of Jewish sovereignty in any part of Palestine.”

Bevin's description of the “irreconcilable conflict” is telling. He does not argue that the Jews and Arabs in Palestine can't agree about how to rationally and fairly divide the land. He explains that the Jews want a state — of whatever size — and that the Arabs want the Jews not to have a state at all. This is an existential conflict by definition, as it involves the very existence, rather than the size, of the state of the Jewish people. Such a conflict is indeed irreconcilable, barring the annihilation of the State of Israel, and as Bevin concluded, “There is no prospect of resolving this conflict by any settlement negotiated between the parties.”

Bevin's description of the conflict is more than 66 years old, but the majority of Israelis today wonder if the situation has truly changed. The reason that I myself have become more skeptical of the rational conflict thesis is that in the past decade, it has become even more evident that Bevin's prescient description has been the best predictor of Israeli and Palestinian decisions since 1947. Whereas the Jews wanted a state, whatever its size, they have repeatedly and at all critical junctures accepted and continue to accept solutions that embrace, even if begrudgingly, the logic of partition. And whereas the Arabs have opposed the Jews having any state at all, at all critical junctures and up to this moment, they have refused any solution that would create a state for themselves, if the price of doing so meant finally accepting that the Jews should have their state, too.

If people are to be judged by their actions — as I believe they should — then over time, the existential thesis better explains why the Palestinian Arabs would prefer to have nothing rather than the dignity of their own state, if it means sharing the land with the state of the Jewish people. Most of the Western world continues to believe that the essence of the conflict is rational, and therefore doggedly pursues rational negotiated solutions based on the principle of partition. But if the essence of the conflict is existential, peace would only be achieved the day the Arabs accept the deep logic of partition, which is that the Jewish people have an equal and legitimate right to a sovereign state in the only land in which they were ever sovereign. The rest is details.

Einat Wilf was the chair of the Education Committee and a member of the Foreign Affairs and Defense Committee in the 18th Knesset. She is the author of three books that explore key issues in Israeli society.