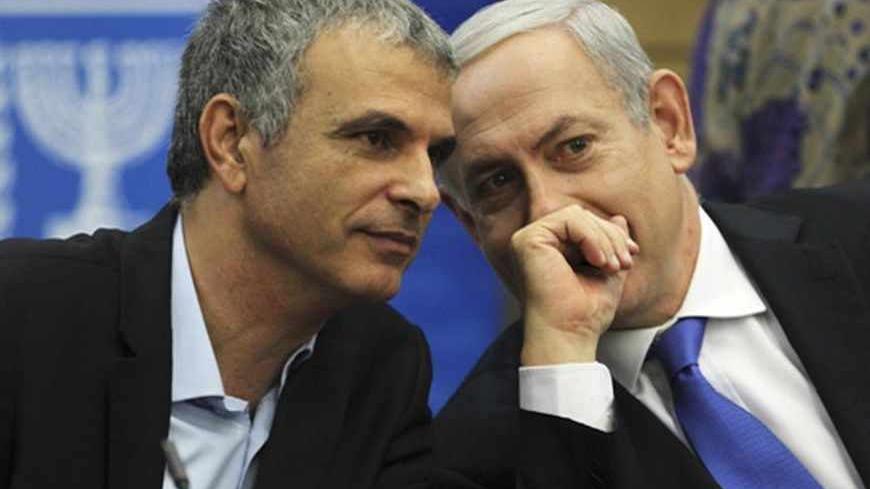 Former Prime Minister Ehud Olmert now heads a flourishing consulting firm based in a chic building in downtown Tel Aviv. Former Communications Minister Moshe Kahlon heads a think tank at Netanya College, which focuses on the cost of living. They are both preparing to return to political leadership positions in the next election cycle.

While Olmert and Kahlon are friends, they are not coordinating their moves. Nevertheless, it is quite possible that as the next elections approach, they will combine forces and establish a new center party, particularly if Yair Lapid’s Yesh Atid Party keeps heading in the same direction it has been going over the past few weeks and heads for a catastrophic crash. An Olmert-Kahlon party could win the votes of Israel’s political center. Olmert will carry the diplomatic banner in the spirit of a two-state solution, while Kahlon — the “father of cellphone reform” — responsible for a significant reduction in rates, will advocate for social issues.

These two “exes” make no pretenses of concealing how much they crave to return to leadership positions. At an event in London in April 2013, Olmert announced that he wants to be prime minister again, even though he was forced to resign from that position in the wake of criminal investigations after the 2009 elections. He is still a member of the Kadima Party, but that party has become a failing brand over the past few years and was almost wiped out in the last elections, receiving just two seats. The conventional wisdom is that Olmert would prefer to create a fresh new political platform.

The situation for Kahlon is a bit more complicated. Like Olmert, he plans to be a major player in the next elections. The Likud Party is still his home, but senior members of the party with whom he has spoken recently believe that as long as Prime Minister Benjamin Netanyahu remains the head of the Likud, Kahlon will not run against him. Instead, he will look for a new political home. They say that Kahlon told them that he cannot work with Netanyahu anymore, and that he realizes he may be forced into one of two options: Either he will have to establish some new political framework or join an existing party.

Having returned to Israel after completing his studies at Harvard University's prestigious business administration program, the former communications minister decided that he would not look for a job in the business world. He turned down quite a few offers so that he could continue promoting the social issues dear to him, knowing full well that he would return to politics to complete what he had not yet finished: real estate reform.

Right now, solving the housing crisis is Kahlon’s top priority. It is also the reason why, after making his surprising announcement that he was retiring from politics, he accepted Netanyahu’s request before the last elections to head the Israel Land Administration. Netanyahu was hoping that this would prevent voters focused on social issues from abandoning the Likud, but as Kahlon foresaw, Netanyahu violated this agreement. Even now, Kahlon is still the Likud’s strongest economic brand. He has been that ever since his cellphone reform turned him into a social issues leader.

Since his return from Harvard University, he has enjoyed every minute at his new research institute, which is only now beginning to take shape. The think tank was created to develop action plans to lower the cost of living on various fronts, but especially in the real estate market. Kahlon wants to do for the housing branch what he did for the cellphone sector. The team that he heads is slated to release its first position papers in the very near future, and their data and conclusions are expected to pose a challenge to the government by showing the public that there is a solution for the problem of housing costs in Israel.

At the same time, Kahlon is also a popular public speaker. On Aug. 7, he gave the keynote address of a lecture series organized by a commercial group at a trendy Tel Aviv bar packed with young people. It was hardly surprising that the former minister attacked the government on a wide range of socioeconomic issues. He actually began his talk by saying, “The State of Israel is working against its citizens.”

Political meetings make up a good part of Kahlon’s busy schedule. He meets regularly with senior members of the Likud, politicians from other parties and leading representatives of the economy. Is he aiming to be the prime minister? His confidantes say that he is not necessarily set on the idea, but it is an option. According to them, what he is most passionate about is instigating major socioeconomic changes.

Olmert also makes sure to have one foot in the political arena at all times. He meets with former Knesset members from the Kadima Party and maintains warm personal relations with former senior leaders of the security establishment such as former head of Shin Bet Yuval Diskin, former head of Mossad Meir Dagan and former Defense Minister and Kadima’s current Chairman Shaul Mofaz. These are the people who Olmert will want by his side when he returns to public life. The same is true of the next generation of political leaders such as former Knesset member Yohanan Plesner, Olmert’s protege, who was considered one of the best and most ethical parliamentarians to serve in the Knesset in the past few years.

While Kahlon has a socioeconomic agenda, Olmert wants to return to politics, so that he can bring about a diplomatic arrangement with the Palestinians. Ever since resigning as prime minister, he has felt as if he missed a major opportunity by not being able to reach an agreement with the Palestinian Authority Chairman Abu Mazen (Mahmoud Abbas). Given the parity between the right- and left-wing blocs in the last elections, he is convinced that the Israeli public wants that kind of agreement. Furthermore, Olmert believes that if a permanent arrangement based on the principle of two states for two peoples is not reached, Israel’s continued existence as a Jewish and democratic state is in jeopardy.

Despite his political ambitions, Olmert is busy getting his legal affairs in order, and this continues to hang over his possible return to the political arena. He must first contend with the state’s appeal to the supreme court over the Rishon Tours case, and with the ongoing Holyland trial, after being indicted for accepting a bribe. Until these legal proceedings are over, Olmert will not take any practical steps toward establishing some new political framework.

Kahlon and Olmert are well-aware of how disappointed the public is with Finance Minister Yair Lapid. The voters fleeing from Yesh Atid should serve as a base for them to build on in the next elections. While it can be argued that this is just a temporary trend — which may yet change — the Israeli public has proved time and again that its loyalty to centrist parties is very limited.

The two men believe that the Israeli public will be ready for a government turnaround in the next elections. Frustration with Netanyahu will only intensify, and the chances of him changing his fate through some diplomatic arrangement with the Palestinians are meager at best. Nevertheless, the former Kadima chairman has no intention of speaking out against the son of his good friend, former Justice Minister Yoseph (Tommy) Lapid, and it is expected that he will aspire to integrate him into the new party. Olmert will be the leader, but Lapid will be right behind him.

Olmert and Kahlon bring considerable experience to the Israeli political scene, each in his own field of expertise. This will be all the more conspicuous when juxtaposed with the inexperience of the "brothers" [Economy and Trade Minister Naftali] Bennett and Lapid, two representatives of the "new politics," who still have no significant achievements to speak of. If the current situation continues, the public is likely to go back to supporting veteran, old-school politicians. The center party that will almost certainly be created before the next elections may not have a name yet, it may not have a leader and it may not have a list of Knesset candidates, but its spirit already hovers over Israeli politics.