Former Likud Communications Minister Moshe Kahlon is capable of changing the political game and tipping the scales — provided he manages to undermine the power base of the Likud and Shas parties. 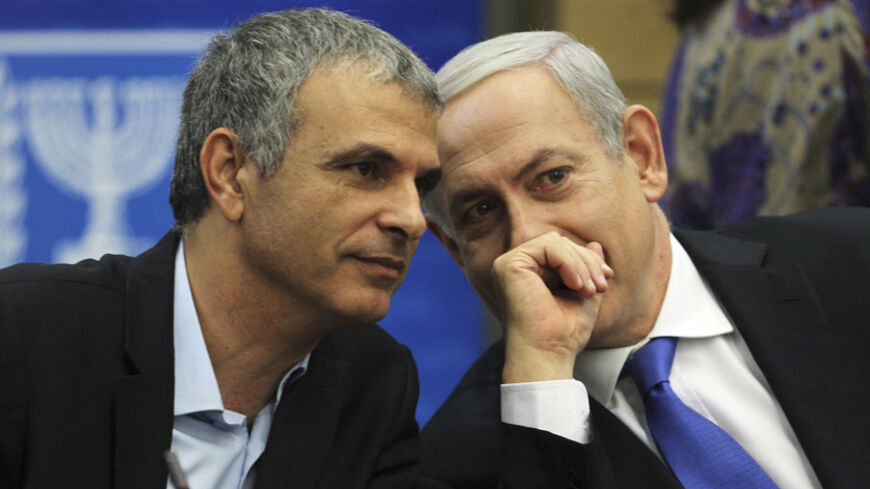 About three weeks ago, at the beginning of October, former Communications Minister Moshe Kahlon met with a group of senior business executives, and introduced them to his economic and social worldview. The members of the group, CEOs and heads of large corporations, are among the economic elite of Israel. From time to time, they convene for an informal, closed meeting with a key figure in the Israeli public. Naturally, Kahlon, who signed on for the reform of the local cellular market and was considered a likely front-runner in the next parliamentary elections, has stirred much interest in this forum.

However, expectations that the former communications and welfare minister would present forum members with a well-formulated socioeconomic policy were met with some disappointment. Al-Monitor found out that the socioeconomic “lecture” delivered by Kahlon was rather sketchy and not fully formed, and so were the reforms he was talking about.

Be that as it may, it isn’t at all certain that Kahlon should be concerned about the pale impression he left on his business-elite interlocutors, since this group does not form a part of the electorate he seeks to woo. Rather, his potential voters come from the social bracket that finds it difficult to make ends meet — those who may well look up to him as their present-day savior.

However, there definitely is someone who is following with concern the events involving Kahlon's political surroundings, and that’s Prime Minister Benjamin Netanyahu. In fact, it was on account of Netanyahu that Kahlon left the ruling party, which, under certain circumstances, was liable to be the big loser following his withdrawal. Kahlon, a former Likud Party member of Sephardic (Middle Eastern) origins, and a staunch advocate of the social cause, has a fair chance of winning over Likud and Shas party voters. These two right-wing parties, both with a Sephardic-popular tone, are currently mired in a deep internal crisis. Thus, some of their supporters may find a new home in the new party the popular Kahlon plans to establish.

Kahlon will try to do what Knesset member Shelly Yachimovich once attempted, and accomplished, as chairwoman of the Labor Party: She managed to win over right-wing voters to the Labor Party by running on social issues. However, election results showed that in the process Yachimovich had driven away traditional Labor voters, who were angry with her for trying to cater to the right and playing down issues of diplomacy.

It is thus no surprise then that Kahlon generally refrains from statements on diplomatic issues. It is common knowledge that he began his political career in the Likud as a member of the dissident group that opposed the disengagement from Gaza (2005). It is likewise known that he was a close associate of hard-line Tourism Minister Uzi Landau. Centrist voters may be scared off by such views. At the same time, if Kahlon takes too sharp a turn left, he won't be able to win over the Likud and Shas voters. The third option, that of maintaining ambiguity on the diplomatic issues, is no less problematic. Sooner or later, Kahlon will have to present a well-formulated diplomatic policy, and it is not at all clear how he is going to jump over this hurdle.

If Kahlon just manages to draw Knesset seats away from Minister of Finance Yair Lapid’s Yesh Atid Party and from the socially oriented leftist parties, it will have no real effect on the political arena. In that case, his group would become the center party of the moment. If, on the other hand, he succeeds in becoming a right-wing vote magnet, he could head a socially oriented party that would be able to tip the scales. And under certain circumstances, referred to by Kahlon himself, he could even divest Netanyahu of a fourth term in office. That’s why Kahlon is at present the most interesting player in the political arena.

Judging by the polls, Yesh Atid, Hatnua and the Labor Party are on the decline — or, at least, failing to take off. As for the Likud, it is bleeding from internal conflicts, while Foreign Minister Avigdor Liberman's Yisrael Beitenu has seen better days. At the same time, Kahlon is a rising star with the appeal of a promise and hope for the future. Unlike Lapid, star of the previous elections, Kahlon has a record of proven success: He is the man who championed cellphone reform, which cut the cellular service bills of each and every one of us in Israel.

On Oct. 20, Kahlon officially announced that he intends to create a new party in the near future to combat the rising cost of living. He made his announcement — and not by accident — at a business convention, in a meeting with the Lahav umbrella organization for independent business people in Israel.

The timing chosen by Kahlon was no accident, either: Following a summer of warfare and long weeks when security and diplomatic issues preoccupied the Israeli agenda, the so-called Milki (chocolate pudding) protest has brought back the core issues advocated by Kahlon to the top of the national agenda. Besides, the expiration date of the current government is fast approaching, and Netanyahu himself has signaled that he is getting ready for early elections: With that in mind, he is busy tightening his ties with the ultra-Orthodox parties (and to that end, foiled the proposed bill on conversion to Judaism). What’s more, he seeks to move up the Likud primaries for the party leadership, and has been deliberately firing up the political arena.

Whether or not Kahlon will be able to fundamentally change the political game totally depends on his ability to undermine the power base of the Likud and Shas parties. It depends on his ability to win over their voters and grab seats from these two parties, and possibly even grab some seats from the socially minded voters of HaBayit HaYehudi Chairman Naftali Bennett. And there were quite a few of them in the last elections.

In recent months, Kahlon has been wooing Likud activists, with whom he kept in touch ever since he took a break from politics in October 2012. In private talks, he expressed his confidence that he would be able to attract to his new party key Likud activists and party branch heads, who, quite like him, were fed up with Netanyahu. Kahlon is well aware that the difference between a significant political change — namely, a change of government — and a mere ministerial position in Netanyahu’s fourth Cabinet lies in his ability to pull it off.