Is Netanyahu Preparing To Bomb Iran?

Is Prime Minister Benjamin Netanyahu, “the weakest leader Israel has ever had,” about to make the historic decision to bomb Iran? 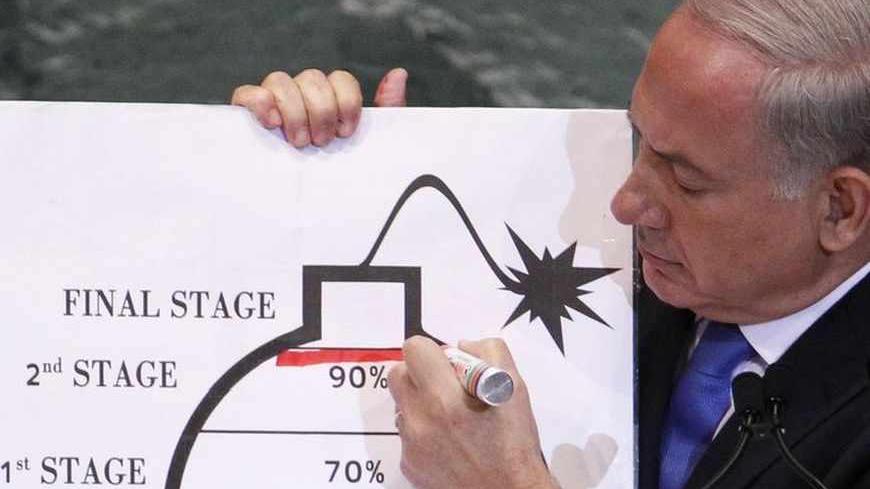 It started with intermittent, meaningless and senseless babble. Then it picked up, turning into furtive whispering and then a buzz. Now it has resurfaced and in full volume: Iran. Once again, it’s Iran. By the end of the summer or early fall, or by the end of fall, or something to that effect, Israel will strike Iran, on its own, independently.

Having already buried the military option for Iran and having believed that the election of the Iranian President Hassan Rouhani would give everyone another year of quiet, we see it coming up again. Just when we thought that the Americans would not let Israel strike before exhausting the talks with Rouhani’s administration and figuring out this man, just as we thought that we had gotten rid of this saber-rattling that recurs every spring like migrating birds flying home, it’s happening all over again.

Basing itself on “European sources”, the Wall Street Journal this week [Aug. 5] reported that Iran would be able to make a plutonium bomb next year once the reactor in Araq was completed.

A plutonium bomb? Where has this come from? Well, it turns out that all along the Iranians had been quietly poring over an alternative plutonium track in the event they had to freeze the uranium and centrifuges track. It has now become apparent that they are about to complete this dramatic move.

I would have scrambled to the nearest nuclear shelter as soon as I was finished with this article had I not suspected that it was a leak from an Israeli source and had I not heard from quite a few experts that the nuclear reactor in Araq is nowhere near completion. Moreover, the Iranians do not have the device needed to separate plutonium from used fuel rods (see Shmuel Meir’s blog “strategic discourse” published in the Israeli daily Ha’aretz).

Wait, there’s more. A week ago [July 30], after the painful decision to release more than 100 Palestinian prisoners, some of whom are "heavyweight" murderers, to resume negotiations with the Palestinians, Israel’s Defense Minister Moshe "Bogie" Ya'alon had something very interesting to say: Underlying the decision to release prisoners — he stated — “were strategic considerations, which might be revealed in the future.” This is as broad a hint as one could possibly get. The more stringent interpretation of what Ya'alon said would be as follows: I am opposed, and have always been opposed to freeing murderers, but given that scuttling the Iranian nuclear bomb is of paramount interest, overriding all other trivial affairs, we have freed the prisoners. In the future you’ll understand why.”

What will we understand in the future? In light of the intimations, the signals and the whispers, we are able to figure out the quiet deal that was cut between Israel and the United States: Israel will do whatever is necessary to start negotiations with the Palestinians, maybe even reach a type of an interim arrangement ahead of the final status arrangement. America will give Israel a green light to bomb Iran after having fully verified that the Iranians are really poised to make the final “charge” toward the bomb.

In the upgraded version of this story — the 2013 model — this is a new and quick bypass that uses the reactor in Araq, rendering the centrifuges and all those other complicated matters that Iran has been dealing with for the last 10 years unnecessary. Incidentally, this fast track also has one major drawback: The plutonium track is much easier to torpedo — one blast over the reactor in Araq and it is “game over” for the Iranians. It’s Israel’s quintessential dream.

To add fuel to these speculations, the gifted Israeli writer Sefi Rachlevsky — sort of a doomsday prophet who is well-versed in the Iranian subject — informs his readers (in Ha’aretz) to make no mistake: This time Netanyahu means business. He’s not afraid. He is an ideologue. He will strike Iran. Yes, alone, too. He prepares, he plans, he has released prisoners and has been pursuing negotiations with the Palestinians solely to this end.

Putting fantasy, assessments and imagination aside, let’s get back to reality. I have no proof to the contrary that the above is nothing more than a figment of the imagination. Ya'alon did say those things and the media did run them. The leaks about a “plutonium bomb next year” were made, and the Israeli defense cadre is also starting to whisper anew. A deal between Israel and the United States? It has been denied by all sides, but such deals are never put in writing. Sometimes they are not even entertained in one’s mind. Instead, they are made in muted silence, a tacit agreement, a nod. Only history will determine, at some point in the future, what had transpired here.

In the interim, as we wait for history to take its course, we need to bear in mind a few other things, first and foremost Netanyahu’s character. He is the weakest leader Israel has ever had. He’s a person that balks at every sudden movement or fleeting threat, however faint. He has already attacked, destroyed, conquered, eradicated and won with his fulminatory speeches. Yet when it comes to the test of reality, he invariably recoils at the last minute, chickening out, panicking and fleeing, all petrified. All he wants is to go back home (to the prime minister’s residence in Jerusalem) peacefully.

To use an American term, Netanyahu is a “choker” — one who fails to perform well during the big moments, just like the New York Knicks’ Pat Riley in the 1990s.

A caveat: When people like that — who have demonstrated lifelong weakness and ineptness — tend to get their act together once in their life — only once — to try to shake off the monkey on their back with one abrupt, bold and aggressive move.

Netanyahu does regard the Iranians as the new Nazis. He does think that we are headed, perhaps, toward a second Holocaust. Given certain conditions (American consent), Netanyahu — using external help — just might pluck up the necessary gumption to take action against Iran.

The Israeli defense establishment would be his last obstacle. Former Chief of Staff Lt. Gen. (res.) Gabi Ashkenazi, former Shin Bet director Yuval Diskin, former Mossad director Meir Dagan and former Director of Military Intelligence Maj. Gen. (res.) Amos Yadlin are all gone. Between 2009 and 2011, they were the mainstay of the dramatic objection to a strike. As it turns out, their successors are equally opposed, chief among them, the commander of the Israeli Air Force (IAF) Maj. Gen. Amir Eshel. Other naysayers include incumbent Mossad director Tamir Pardo, Shin Bet Director Yoram Cohen, Director of Military Intelligence Maj. Gen. Aviv Kochavi and Chief of Staff Lt. Gen. Benny Gantz. None have changed their minds, and the across-the-board opposition remains unwavering.

Notwithstanding, the serving generals are not as powerful and dominant as their predecessors, partly because they saw what had happened to the latter (Gabi Ashkenazi, for example, is still fighting for his public life against the onslaught by the people of former Defense Minister Ehud Barak), and so they have learned the appropriate lesson.

Will Israel strike in Iran? I do not know. Would I place a wager on such a strike? Probably not. Does this mean we can all sleep peacefully? No, it doesn’t. It truly doesn’t.