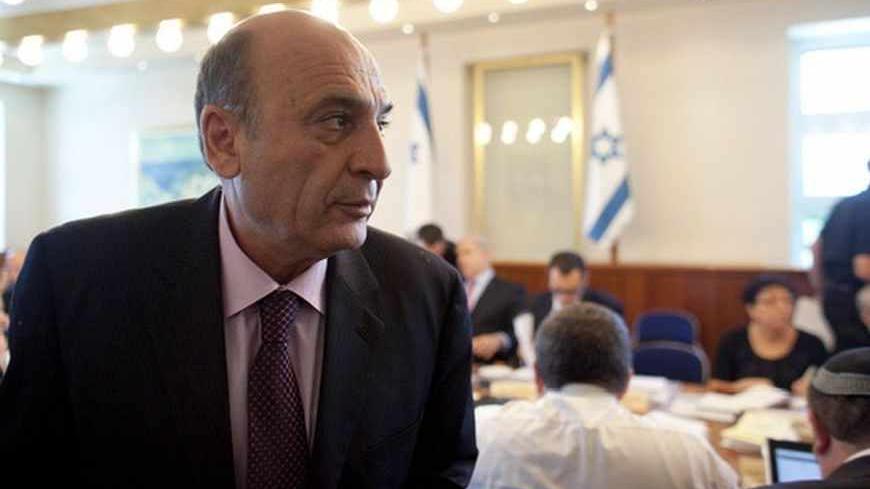 On the eve of the likely strike on Syria, former defense minister and current Knesset member Shaul Mofaz lashed out at the decision which Prime Minister Benjamin Netanyahu espoused about three years ago to distribute gas masks to only 60% of the population. As chairman of the Knesset Foreign Affairs and Defense Committee, Mofaz struggled to change that decision. In light of the recent run on the gas mask distribution centers, the pandemonium and the long lines, he said that the mistake should be rectified as soon as possible if only to increase peoples' sense of personal security.

The stocks cannot be replenished before the expected strike on Syria, because it would take months to complete an order for several hundred thousand gas masks. Yet in an interview to Al-Monitor, Mofaz estimated that the probability that Syria will attack Israel is low. He also supported the American decision to deal a military blow in order to prevent the dangerous precedent of using weapons of mass destruction.

The decision to procure gas masks for only 60% of the population was made during your term as chairman of the Knesset Foreign Affairs and Defense Committee. What was the underlying logic?

"It was to save money. This is a very complicated issue. As defense minister in 2003, during the Second Gulf War, I insisted that gas masks be provided to 100% of the population. Over the years, different decisions had been adopted, but in the last three years it was decided to hand out masks to only 60% of the population. As chairman of the committee, I was opposed to that decision. I said that there were two options: Either you hand out the masks to everyone or to no one. Obviously it makes no sense not to hand them out at all.

"In order to provide the entire population with gas masks, the budget should have been increased by 1 billion shekels [some $274 million] as well as an additional 300 million shekels [some $82 million] yearly for maintenance. This wasn't done and that's a mistake that should be rectified. What's being distributed today is nothing; we're talking about only a few thousand gas masks, and those that don't have them scramble for them. It should be understood that there are no masks for 40% of the population. That's the situation and that's a decision that the government has to explain to the citizens. Even if you decide to provide gas masks to everyone, it will take a few months before the process is completed."

Are these gas masks even effective?

"Although the probability that Israel will be attacked is very small and there's no need for panic, it would have been better if the entire population had protection. But if chemical weapons are used — perish the thought — gas masks are a must. And there's one more important thing, which is the peoples' sense of security. We have a problem that some feel secure while others don't.

Is the expected American strike on Syria the right thing to do?

"A massacre is taking place in Syria. Syrian President Bashar al-Assad is fighting for his survival and in recent months has been using weapons of mass destruction against his own people in order to vanquish the rebels in the battle for Damascus. The world cannot take such an event lying down. A strike is certainly warranted. A superpower like the United States does not proceed to strike without having a smoking gun first, preparing public opinion, cobbling together a coalition and coordinating the move with other countries."

What would be the implications if there were no response?

"Failure to respond to the use of chemical weapons aimed at massacring people is crossing a red line — not only in Syria but for all democracies that believe that weapons of mass destruction should not be used. Unless the United States acts, a dangerous precedent will have been created, having an adverse impact on the quality of life across the globe. Such a situation is conducive to a dangerous reality."

What's your position about targeting Assad himself?

"At the moment America has no intention of intervening in the chaotic situation in Syria because it doesn't want to be mired down by sending its troops onto Syrian soil. And it is right. The United States seeks to punish the Syrian regime by focusing on certain targets. Obviously, there's always a chance that something will go awry. Nobody can predict if someone decides to fly a suicide mission onto an American destroyer.

"The United States doesn't have Assad in its crosshairs, but such an operation would weaken him and his military. [President Barack] Obama has a large bank of targets of Syrian infrastructure and Assad's weaponry depots, including the chemical ones. There are more than enough targets."

In your opinion, has the reaction of Netanyahu and Israel's defense chiefs been the right one so far?

"Israel is not a party to the conflict and should not get involved. Yet its moral voice should be heard, because a massacre is taking place, a red line has been crossed and weapons of mass destruction have been used. We need to be on the side of the good guys.

“Until now, the whole conduct and the fact that Israel has stayed out of all of this is the right thing. If it were up to me, I would be less blustery about what Israel would do if it were attacked. It's unnecessary to say so many times that we will react forcefully and explain what we will do if we are attacked. It's a no-brainer."