The increase of terrorist bombings in Baghdad has been a catalyst for more consultation between Iraqi federal and Iraqi Kurdish peshmerga forces. 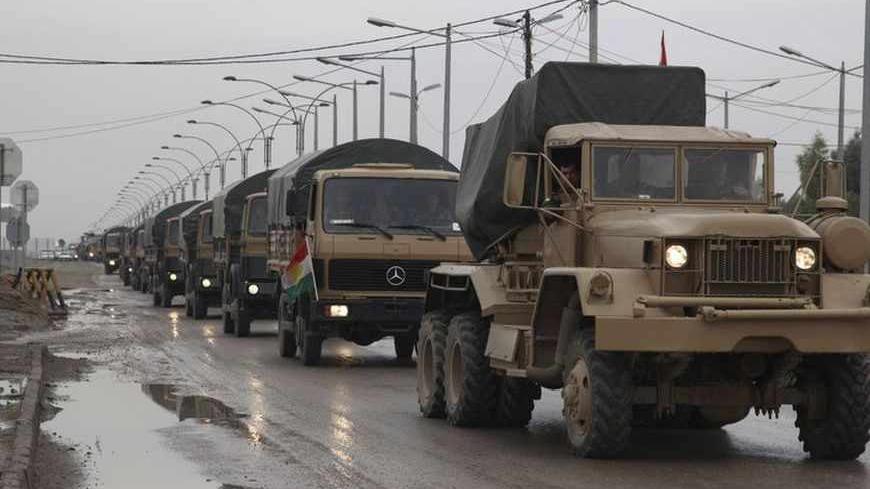 A few days after the storming of Abu Ghraib prison, which occurred on July 21, 2013, an Iraqi military force had cut off the main road leading to the Green Zone coming from the Karada Mariam neighborhood in central Baghdad. Meanwhile, vehicles of peshmerga forces, filled with heavy equipment, were entering the headquarters of the federal Ministry of Defense.

Until this moment, however, military leaders in Baghdad and Erbil refused to admit that peshmerga forces have gone to Baghdad to take part in a security operation. They only confirm that there was an agreement between them which was not implemented.

The story of the peshmerga involvement in security plans set by the military bureau of Prime Minister Nouri al-Maliki remains vague.

Hasan al-Sanid, a Shiite MP for the State of Law Coalition and chairman of the parliamentary Security and Defense Committee, told Al-Monitor that “any news about peshmerga forces in Baghdad is meaningless and unfounded.”

Al-Monitor’s correspondent visited areas of northern Baghdad where military operations — carrying the name “revenge of the martyrs” — were being held, and witnessed joint checkpoints manned by the federal Iraqi army and peshmerga forces on the road linking Baghdad to Kirkuk. This road passes through areas deemed dangerous on the security level, such as Al Azim and Tuz Khormato.

At every checkpoint, two soldiers — one Arab and one Kurd — take charge of inspection.

A high-ranking officer in a unit tasked with protecting the surrounding areas of the Green Zone said in a statement to Al-Monitor, “The peshmerga forces have been present in Baghdad for years, and they are mostly protecting Kurdish officials, especially the presidency and Ministry of Foreign Affairs.”

The officer then added, “This does not rule out the possibility that other Kurdish soldiers have entered Baghdad after Aug. 1, 2013.”

Nevertheless, Shuwan Mohammed Taha, a Kurdish member of the parliamentary Security and Defense Committee refused, in a statement to Al-Monitor, to confirm any information about peshmerga forces entering the capital.

He said, “Nothing of that sort happened. We are discussing with the federal government the appropriate means to put an end to the deteriorating security situation, especially after the failure of security forces in the jailbreaks of Abu Ghraib and Taji prisons.”

The statement of the Kurdish politician differs, however, from the news spread by media outlets in regard to the approval of Massoud Barzani, president of the Iraqi Kurdistan Region, to put peshmerga forces at the disposal of the federal government in Baghdad.

In regard to this subject, Taha notes, “Yes, the Iraqi Kurdistan Region is keen to preserve federal security and will not refrain from providing help. However, we do not want to deploy in the Green Zone, because it would look as if we are protecting the government and not the citizens.”

Taha’s statements conceal many disputes that are ongoing between key politicians and military leaders in Baghdad and Erbil.

In a statement to Al-Monitor, a member in the Iraqi Ministry of Defense uncovered the tensions witnessed in the prolonged meeting between both parties in Baghdad.

It is important to note that a delegation from the Ministry of Peshmerga had visited Baghdad on Aug. 3, 2013 and held a meeting with officers in the Iraqi Ministry of Defense.

Al-Monitor secured a copy of the official communiqué issued after the meeting, in which it was said that the visit aimed to “achieve further coordination.”

The truth, however, as the member of the ministry told Al-Monitor, is totally different than what was said.

He said, “The Kurdish delegation asked the Ministry of Defense to approve the deployment of soldiers on the roads outside Baghdad in the administratively disputed areas between Baghdad and Erbil.”

“Officials from the Ministry of Defense were reluctant to approve [this deployment], until Maliki’s office ordered to reject the proposal and called on the Kurds to deploy [their forces] in the cities and neighborhoods of the capital, while leaving the outside roads under the control of federal military forces,” he added.

The member believes that “the reason that led Maliki to refuse the deployment of peshmerga forces on the roads outside Baghdad is related to his distrust in what they will do within the areas disputed between Arabs and Kurds.”

He continued, “Maliki feels that the Kurdish aspirations in these areas will not come to a halt.”

The member of the Ministry of Defense believes that “Maliki is facing tough security situations that highlight the failure of his security plans. He currently wants a security partnership with any political party to share at least the responsibility of ensuring stability.”