Does Al-Qaeda in Iraq Have Chemical Weapons?

Iraq's Defense Ministry says al-Qaeda was caught producing chemical weapons; some believe the claim was made to distract from authorities’ mismanagement of the security situation. 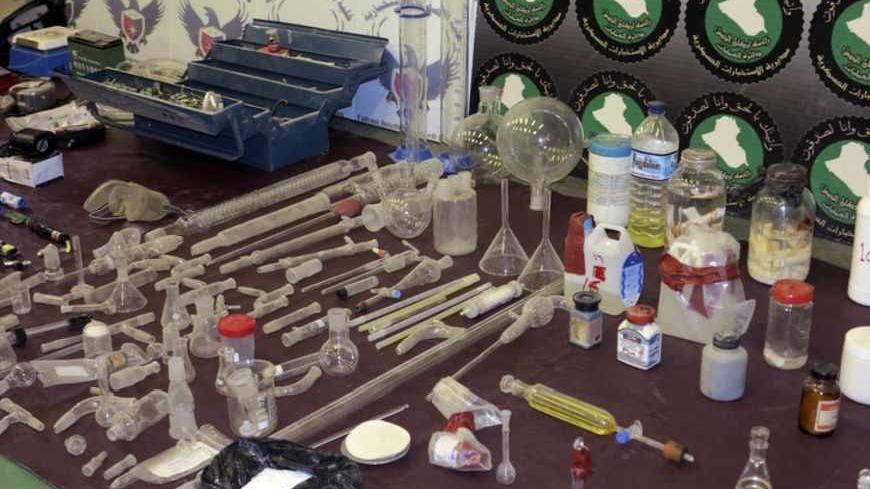 Laboratory equipment and chemicals were put on display for a news conference at the Defense Ministry in Baghdad, June 1, 2013. - REUTERS
Ali Abel Sadah
June 5, 2013

The Iraqi Ministry of Defense announced that it arrested an al-Qaeda-linked cell producing a nerve agent, reportedly to be used in operations inside Iraq and later transferred to the capitals of neighboring countries.

The ministry said in a statement issued June 1 that “a special military force raided two sarin and mustard gas plants after they had been under surveillance for around three months,” noting that the first plant was in Baghdad and the second in one of the provinces.

The ministry did not specify where the five cell members were arrested.

It is worth mentioning that nerve-agent chemicals are among the most toxic substances in the world, and when they become airborne, they can kill a person in a matter of minutes.

The Ministry of Defense’s announcement came following three bloody weeks in Baghdad and other regions, where car bombs killed and injured hundreds of people, part of the ongoing Shiite-Sunni political crisis and the security services’ failure to end the violence.

The ministry’s announcement surprised local experts, seeing how it has caused debate to shift from “how to achieve societal stability” to the worrying question: “Does al-Qaeda have chemical weapons?”

Moreover, before this announcement, there was no indication whatsoever that al-Qaeda was able to develop chemical weapons. This led one of the Security and Defense Committee members in the Iraqi parliament to question the Ministry of Defense’s story.

Shwan Mohammed Taha, a Kurdish member of the Security Committee, told Al-Monitor, “It is unlikely that al-Qaeda has developed this dangerous technique. I think that the Ministry of Defense’s announcement is an attempt to save face following its huge failure in maintaining security in Baghdad.”

According to Taha, “The security services are in a very awkward position and the security changes carried out by the commander in chief of the armed forces, Nouri al-Maliki, did not succeed in reducing violence.” He asserted that “on this basis, news of the arrest of a nerve-agent-manufacturing cell may be the sole lifeline for security services to improve their reputation.”

Since 2003, the Iraqi authorities have not registered any fatalities caused by nerve-agent chemicals or by chemical weapons.

But what if Al-Qaeda indeed acquired this new technology, enabling it to manufacture chemical weapons, especially since the Ministry of Defense announcement talked about two plants being raided?

On May 25, 2013, the smell of burning sulfur spread over Baghdad and stirred the fears of the city’s residents, while local journalists from various regions reported a strange smell. Some of them said that a sulfur plant in al-Zafaraniyah (southeast of Baghdad) was sabotaged, while stories about its explosion or burning circulated among the public.

Yet, Taha believes that the Ministry of Defense’s news will be a serious turning point at the national security level in the region. He said, “If this is true, and indeed an al-Qaeda cell producing nerve-agent chemicals was raided, this means that al-Qaeda’s techniques have become highly developed, which will have serious implications that must be taken into consideration.”

In Iraq, the Military Industrialization Corp.’s (MIC) employees were the only employees specialized in manufacturing chemical weapons, and they also handle these materials.

The MIC is a military body established by former President Saddam Hussein at the end of the Iran-Iraq war. It became widely known after the first Gulf War when it was headed by Hussein Kamel, Hussein’s son-in-law who implemented Iraqi-funded projects to combat the international embargo on the country. Kamel had full control over nuclear scientists and chemical weapons specialists and subjected them to stringent supervision, fearing that they would leak sensitive security information.

After 2003, a number of them were assassinated, while others were forced to emigrate or disappeared.

Based on the information included in the Ministry of Defense’s announcement, the five arrested persons are likely to be former MIC scientists. Other than that, there are no assurances about their identity or on who trained them in chemical industry techniques. Yet what is most important in this story, if it proves to be true, is that it indicates the evolution of al-Qaeda’s capabilities in Iraq.

On the other hand, several politicians and opinion-makers in the country do not believe the nerve-gas story, which forces the Ministry of Defense to reveal more details.