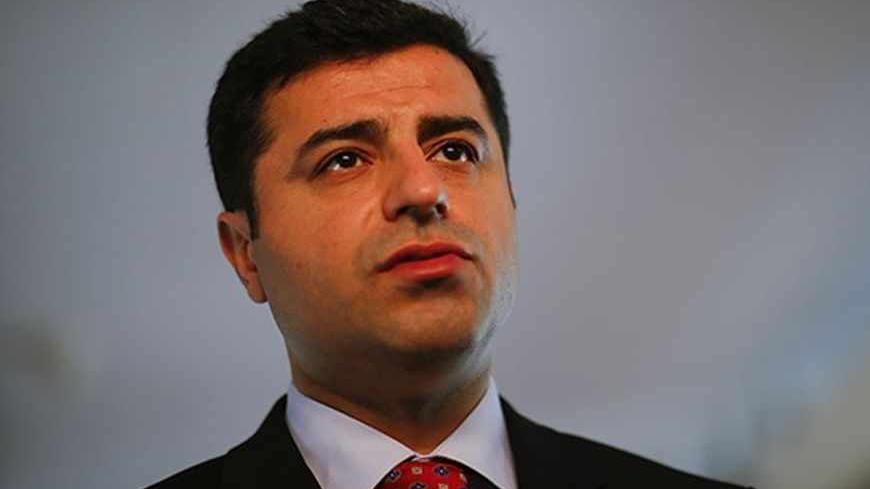 Selahattin Demirtas, co-chairman of the pro-Kurdish Peace and Democracy Party (BDP) answers a question during a Reuters interview in Berlin April 15, 2013. - REUTERS/Pawel Kopczynski

“We are on the eve of two utterly critical dates.” These words belong to one of the key players in Turkey’s fragile peace process with the Kurdistan Workers Party (PKK). In this context, “dates” most certainly translates as “deadlines.”

Based on Aug. 15 statements by Abdullah Ocalan, the outlawed armed movement’s jailed leader, Selahattin Demirtas, co-chair of the Peace and Democracy Party (BDP), the PKK’s political wing, conveyed the message that pressure from the Kurdish issue will be increasing on Turkey's already loaded political agenda.

The sense of urgency in Demirtas’s statements was obvious. In what can be considered a “politely worded ultimatum” to the Justice and Development (AKP) government in particular, and to the Turkish parliament in general, Demirtas urged Ankara to be ready with its Kurdish reform package by Sept. 1 and to pass the relevant laws by Oct. 15.

So what happens, if, for example, Prime Minister Recep Tayyip Erdoğan proposes that the reforms be postponed until after the presidential elections scheduled for next summer?

“If no package is passed [before the deadline],” Demirtas told a small group of journalists in Istanbul, “the alternative is war.”

He added, “We shall do our best to prevent the process coming to that end. But mind you, when the first bullet is fired, it will take at least two to three years to start negotiations again. This is for certain: Ocalan said that if these deadlines are not met, he will withdraw from the talks. He will then say, go and negotiate with those [rebel leaders] in the Kandil mountains. We all know what Ocalan’s pulling out means for the process.”

Two additional points by Demirtas illustrate the fragility of the talks. According to him, Ocalan is dismayed by the broken pledges and is skeptical of the lack of a timetable. He told BDP deputies in their latest visit that he was promised to be allowed to meet a select group of journalists, but it was then denied. He also compared the AKP’s position on talks to those vaguely initiated by former prime ministers Turgut Ozal and Necmettin Erbakan, noting that the current government’s lags behind the other two.

Yet, Demirtas was keen to underline that there is no delay in the timetable. Apparently, the negotiating partners — Ocalan on one side of the table, and Hakan Fidan, head of the National Intelligence, on the other — have noted some progress. The remaining weeks of August are crucial for shaping the framework for reforms.

Ocalan and the BDP have presented two separate drafts. One concerns major steps, such as use of the Kurdish language, some form of devolution of power, recognition of Kurdish identity, equal status for women, and so on. The other proposal involves an amnesty to allow a safe “homecoming” for rebels as they disarm in Iraq.

As the clock ticks toward a reckoning on the issue — at a time when Kurds in Iraq and Syria are being dragged deeper into the regional sectarian conflict — there are no clear signs of what the Erdogan government intends to propose as a domestic resolution. The skeptics in the public debate suspect that the Turkish prime minister will opt to postpone or to take a slow-to-a-minimum approach to avoid sinking Turkey’s already leaking boat. He may choose to use the lull in the fighting between the army and the rebels to score some points by declaring that he is the one who stopped the killings.

No matter what one speculates regarding Turkey’s politically critical 2014, the Kurds cautious approach will be defining. The peace process has brought to the fore the “doves” within the AKP, and it is known that Erdogan has a comprehensive reform package on his desk. Only a few know what it contains.

“We have also heard that the government has worked on a democratization package and that it will be made public by the prime minister when it is agreed upon,” Demirtas said. “What are they [the government] working on? Not a single article of the text has been shared with us. But if we cannot voice an opinion at this stage, there will be no changes on the text after the approval of the prime minister.” He added that in the end, he only expects a ‘half-hearted’ package.

How should the latest standoff in the talks be assessed? The primary element that will shape its outcome is, without a doubt, what the Kurds in Syria and Iraq will do. Next year is the “year of the Kurds,” and as things are going, it will extend beyond 2014. Turkey’s Kurds are, more than ever, being seen in the broader context.

Due to Ocalan’s own “future” and his personal participation, the overwhelming majority of Kurds do not want to lose hope in the peace process. Despite the gently phrased ultimatum, Demirtas was eager to emphasize that they will not be the ones kicking over the table.

Dogan Akin, the editor of the T24 news portal, noted as much in analyzing the message: “Pointing out the timetable and calling it ‘a critical stage,’ he was careful to show that they will be constructive. Demirtad did not say it, but my impression is, even if the package does not pass parliament by Oct. 15, the process will continue, and further moves will be determined according to what the government does.”

Yet, nothing can conceal that Erdogan’s path is steeper after the events surrounding Gezi Park. A well-informed member of the Wise People Commission — which was established to “smooth” the peace process — recently revealed in confidence that he had “severely strong doubts” about whether Erdogan could “swim against the tide inside his party” and come out with a proper reform package. There is already division over the possible amnesty, as many AKP figures oppose any measure that would lead to the release of jailed PKK affiliates.

For Erdogan, what is at stake is much more than bringing peace to the country. He will have many other aspects to consider if he wants to secure a vote safely above 50% and ascend to the presidency next year. That means, he badly needs the votes of the conservative right. It also means that Turkish politics will be even more open ended, populistic and pragmatic.