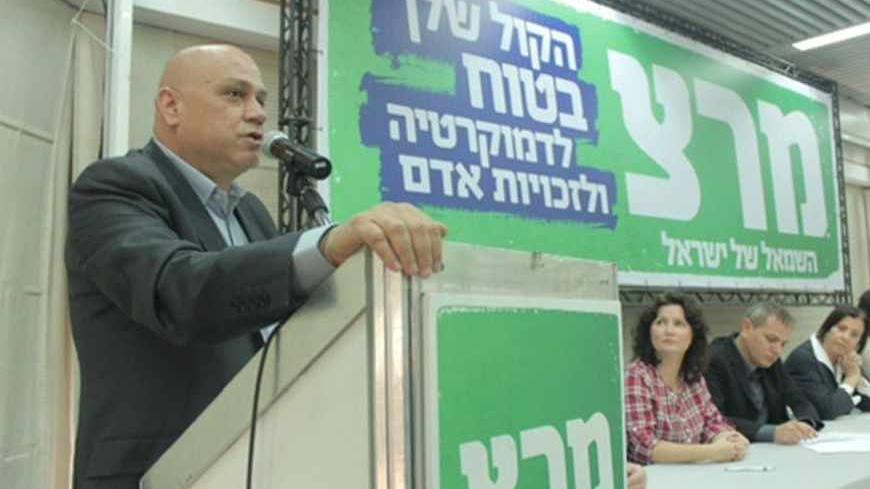 Issawi Frej (Meretz) is the only Arab Knesset member today who is not a member of an Arab party. Twelve Arabs serve in the current Knesset, out of which 11 represent Arab parties (Balad, Ra’am-Ta’al and Hadash). This fact is an expression of the growing estrangement between Arab Israelis and the Zionist left-wing parties — a process that accelerated on the heels of the October 2000 riots, in which 13 Arab citizens were killed. Another expression of the growing gap is the sharp decrease in the number of party members from the Arab sector in the Labor Party. While in the past this sector had the power to tilt the balance in the Labor Party, in the recent 2013 election its influence almost totally dissipated.

Frej joined Meretz 20 years ago, when he was an economics and accounting student at Jerusalem’s Hebrew University. The party was then headed by former Minister Shulamit Aloni. Now he and the other Arab Knesset members are at the epicenter of a political storm, in the wake of the July 31 Knesset resolution to raise the electoral threshold from 2% to 4% of the votes. While Knesset members from the Arab parties argue that this step is directed at harming them, Frej raises the opposite claim in an interview with Al-Monitor. Even though he voted against the bill, Frej feels that the change will actually increase Arab representation in the Knesset, and prefers that this representation will occur within the left-wing Zionist parties.

Al-Monitor: If it is good for Arab representation, why did you vote against raising the electoral threshold?

Frej: “Because ideologically, I am against it. Israeli society is comprised of minorities, and these groups must be given an outlet for expression. But pragmatically, I am in favor of raising the electoral threshold. There is something called survival power, which is stronger than any other force; and in such a situation, you join forces to survive, and that’s what will direct them [the Arab parties]. Ultimately, it will lead to one powerful Arab party. Such a party could even reach 15 mandates.”

Al-Monitor: You are an anomaly in the parliamentary landscape, an Arab in a left-wing Zionist party. Why did you choose such a political home, a priori?

Frej: “When I went to the Hebrew University from Kfar Kassem, I was a political virgin. I didn’t understand anything about the occupation and the Palestinians. Until 7th grade, we sang Israeli Independence Day songs in school and raised the Israeli flag. We didn’t know anything about the Israeli-Palestinian conflict. We had a total lack of political awareness. At university, I came closer to the 'Sons of the Village' [Palestinian] movement — the seed group of the Balad Party. I was embraced by the radical party and, for two years, became a political activist in its service.

“One day, I saw an announcement in the university that Shulamit Aloni was coming to talk to the students. I went with another friend to disrupt her speech, but as soon as she opened her mouth to speak I was in shock: This Jewish Zionist woman was talking to us about the evils of the occupation in the same language that we used. After that encounter I began a thinking process that led me to leave the 'Sons of the Village' movement and join the Meretz Party.

“And there was something else. At that time I needed money, and [Labor Knesset member] Eitan Cabel got me work as a courier in the student union. I started working, one day the chairman of the Arab student union calls and asks me angrily, what are you doing? You are working for the Zionist establishment. At that moment, I understood that he couldn’t care less if I was hungry or had to stop my studies. It was at that point that the barrier was totally breached.”

Al-Monitor: There was no conflict?

Frej: “At the beginning of my university studies I remained in my corner, the corner of the nationalistic Arab, but when you emerge from that place and your head begins to work, you see things differently. When I started to come into more and more contact with Jews, I understood that I can also be part of something. In Meretz, I found what I was looking for. I retain my legacy and my language, and my identity as both Palestinian and Israeli.

“The rules of the game prevail everywhere in the world. Here, the Arab minority is part of the state — like it or not. The fact that Israeli Arabs abstain from participating in elections more and more, strengthens the [political] right. In other words, their abstention has the reverse effect. I chose to take an active part in the political game, while retaining my identity: I am a Palestinian, but I am no less an Israeli. I am a human being born to two mothers: my biological mother is Palestine and my adoptive mother is Israel. My adoptive mother views me as a fifth column, and my biological mother rebukes me for forgetting that she gave birth to me. The solution is to be a bridge between the biological and adoptive mothers.”

Al-Monitor: Do you feel that your friends in the Arab parties err in that they don’t act like you do?

Frej: “What angers me about my friends in the Arab parties is that they act from their hearts, not their minds. If they would operate from within the left-wing parties, they would have more influence and greater achievements. In principle, I am against sectorial parties because I feel that the Arab public should fully integrate the Zionist left. Of course, this is under the assumption that they are not brushed off but accepted with their differences to a party that allows them to preserve their values, a party built on social justice and humanism. The Jews in such a party would define themselves as Zionists and the Arabs would regard themselves as Arabs, but they would share a joint goal.

“The Arab parties have limited effectiveness since most of the time they are observers that do not participate in the game. I view politics in the Knesset as a kind of soccer game: There is a right-wing group and a left-wing group, and 11 Arab Knesset members who sit in the [peanut] gallery in protest. So who needs them? I want them as players.”

Al-Monitor: It seems that the Arab public is not enthusiastic over its representatives. A significant part of it does not even bother to vote.

Frej: “The Arab citizen does not view his Arab representatives in the Knesset as having the clout necessary to change his circumstances. He circulates with the perception that he is not welcome in the country, that he is on probation. The average Arab youth feels that he is on the margins. That is expressed in the filthy streets, the dense construction, the attitude of the secretary in the university and racism in general. He thinks to himself that nothing will ever change. I believe that as soon as the state will start to embrace the Arabs, the anti-establishment Arab parties will no longer have a raison d’etre.”

Al-Monitor: As opposed to other Arab Knesset members, you chose to focus on social justice issues in your parliamentary work and not diplomatic issues. Maybe you find it uncomfortable to get involved in diplomatic issues from within a party like Meretz?

Frej: “No. My election slogan was: My agenda is my home. I came and said: For 65 years, the neglected Arab minority has been held hostage to the solution of the Palestinian problem. And what will happen if the problem is never solved? I will continue to remain a hostage, neglected and cast aside. Therefore, I deal only with social justice issues. This way I promote the solutions to problems that plague Arab citizens. The nationalist discourse exhausts the Knesset members of the Arab parties, they must invest many efforts and resources in it.

“I believe that we share a common destiny with the Jews. Some of what the Arab Knesset members do runs contrary to my worldview. I, for example, would never have joined the Marmara flotilla raid. I also disagree with Knesset member [Jamal] Zahalka who wants autonomy for the Arab minority. True, I am in favor of cultural autonomy, but I am part of the existing state and parliament.”