Bloodshed in Egypt Requires US Response

The Americans must realize that chaos in Egypt threatens the security of the entire region. 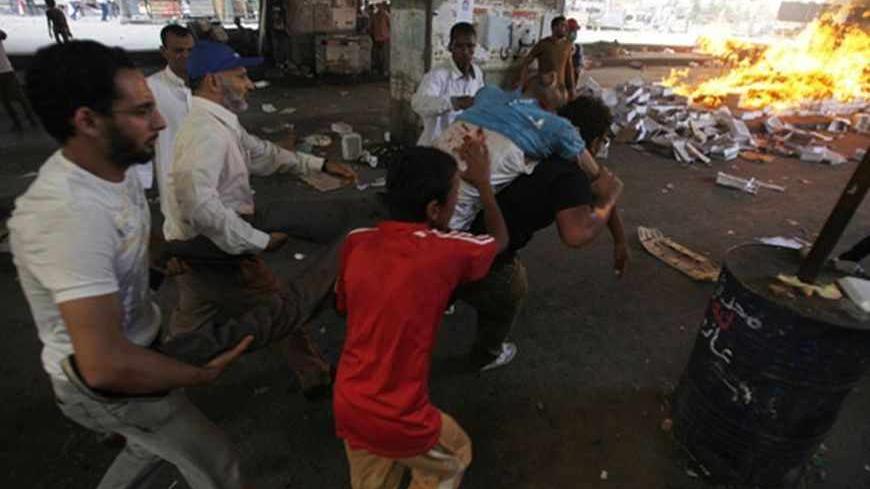 Egypt is in flames, and once again the United States is standing off to the sidelines, all flustered, as it watches the events unfold. It is acting indecisively and sending out conflicting messages. The Obama administration didn’t know how to respond immediately after the Egyptian military seized power in the country on July 4, and presented itself as the defender of the people, acting to fulfill their will. On the one hand, it was quite obvious to everyone that President Barack Obama and Secretary of State John Kerry leaned toward condemning the military takeover. After all, the country that is the cradle of democracy cannot stand idly by while force is used to depose a duly elected president. On the other hand, who would want to be seen as the defender of the Muslim Brotherhood? That was why it was decided to congratulate the new government in guarded terms, while calling on both sides to avoid violence.

Now, when more than 600 people have died in the riots, the Obama administration has handed revolutionary Gen. Abdel Fattah al-Sisi a “penalty card.” The 600 casualties from live fire are incontrovertible proof that this is more than just an uptick in the violence between two rival political factions. It is a sign that the regime is breaking all the moral rules in its relationship with the people. Once it reaches a point where Egypt’s “people’s army” starts shooting indiscriminately at civilian demonstrators, it has more in common with Syrian President Bashar al-Assad’s army, which also shoots indiscriminately at Syrian citizens just to keep the president in power.

No matter how we look at it, a civil war is brewing in Egypt, sweeping the entire population up in the hostilities. This is a civil war that could last years. In fact, it is a lot like Syria. Some 100,000 have already been killed there, and for a while it looked like Assad would win, but that war is far from over.

In Egypt, this is only the beginning. A total of 600 casualties in a single week is the beginning of something horrendous, which will leave the Nile running bloodred for years. The intemperately aggressive response of the Egyptian military to the demonstrations only motivated the Muslim Brotherhood to respond in kind. After seeing 600 people — most of them Muslim Brotherhood supporters — dead, the rules of the game have suddenly changed, and all that is left is one primal and very disconcerting desire: the desire for revenge. With a population of 85 million living in close quarters, revenge killings could lead to the kind of bloodshed that would make Assad’s army seem gentle and considerate by comparison.

Should the United States actively intervene in the Egyptian crisis and try and separate the two feuding parties? It absolutely should. Who, if not the United States, can put a stop to the mass killing of civilians, regardless whether they are Muslim Brotherhood supporters or some other faction in the land of the Nile. But so far, all that the Obama administration has done to show at least a modicum of concern about what is happening there is to cancel a joint military exercise with the Egyptian army.

This is just a halfhearted gesture that will not actually help in any way. The civil war now erupting in Egypt must be nipped in the bud. That does not mean that the Americans should send the Marines into the country, but it is incumbent upon the Obama administration to take drastic, persuasive and painful measures. The most effective way to do this is to hit the Egyptian regime where it hurts, in the purse. The United States should immediately freeze its $1.2 billion in economic aid to Egypt until that country proves that its military is not trigger-happy, and that the nation is not being torn to shreds. Stopping aid will be a harsh blow to the Egyptian economy. It will certainly affect those self-proclaimed “liberals,” who support the Egyptian army and are pleading with it to strike at the detested Muslim Brotherhood. Their calls for an all-out war against the Muslim Brotherhood to cut off its head could, however, fade to a whimper if Obama gives the “liberals” something to think about, in the form of a serious economic threat.

Some will say that this is a drastic measure, and that it will result in the citizens of Egypt regarding the United States as an enemy with its own interests, which are not necessarily in line with Egypt’s interests. Nevertheless, the time to make a decision is now, regardless of what the young people of Cairo have to say about Obama. The Americans must realize that chaos in Egypt puts world peace in jeopardy. As in Syria, the civil war that develops in Egypt will feature the same untamed forces in the form of global jihad activists who want to take advantage of the disarray for their own purposes. The Sinai has long been considered fertile ground for al-Qaeda cells, and the collapse of the Egyptian government will only strengthen groups like Jabhat al-Nusra, which is already playing such an important role in the Syrian civil war against Assad.

So what should Obama do? He should act swiftly and decisively in Egypt before it is too late. There are times when it is the role of an international superpower to assume responsibility and ensure that world peace is maintained.