US Could Face a Trap in Egypt

Israel worries that the US may put the Israel-Egypt peace agreement at risk if it cuts off aid to Egypt's military. 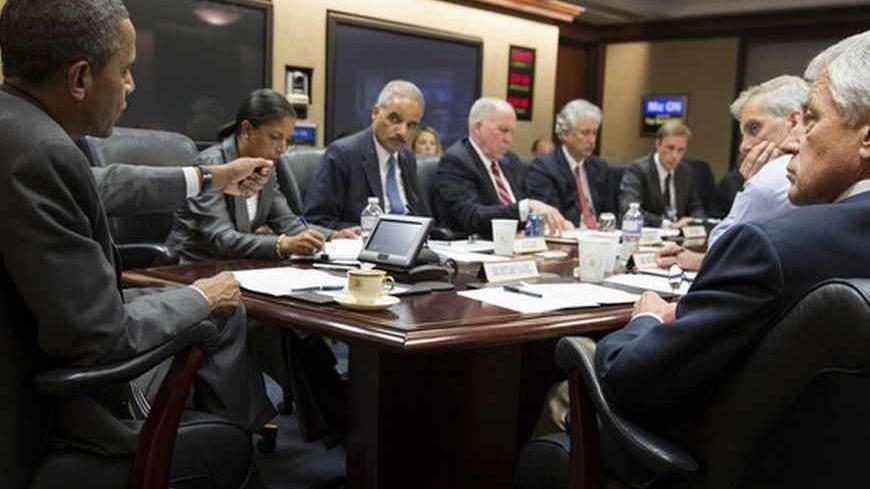 President Barack Obama (L) meets with members of his national security team to discuss the situation in Egypt, in the Situation Room of the White House in Washington, July 3, 2013. - REUTERS/Pete Souza/White House

One week after the dramatic announcement on July 3 by Egypt’s Minister of Defense Abdul Fattah al-Sisi that Egypt’s democratically elected President Mohammed Morsi had been deposed, the country is still locked in the grip of a ferocious and important argument: Was what happened in Cairo a military coup or a popular revolution in which the army had no choice but to intervene out of a sense of responsibility for the future of Egypt and the safety of its people, who were on the brink of a civil war?

Last week I held a series of conversations with a few of my friends, all Egyptian students and journalists. They were infuriated by the very use of the words “coup” or “military intervention,” so much so, in fact, that they even threatened to break off the conversation when those words came up. Much of their ire was directed at the US government’s position, and especially the Obama administration’s response. The US seemed to have been caught on the Fourth of July with its pants down — or more precisely, in its bathing suit on the deck of its yacht.

All the people I spoke with over the last few days interpreted the White House’s response as a clear offer of support to the Muslim Brotherhood. It is a radical interpretation of the American response which was, in fact, a cautious floundering.

Nevertheless, this issue has far-reaching implications that extend beyond the relationship between the US and the Egyptian people, or at least that part of the Egyptian people that does not support the Muslim Brotherhood. The determination of whether this was a military coup or an act taken by the Egyptian military in defense of the civilian population has implications for the country’s economic future and the entire Western world’s attitude regarding the legitimacy of the new regime.

Egypt receives $1.2 billion in aid from the US. With the country on the verge of economic collapse, that money is now, more than ever, as vital as oxygen. Nevertheless, US law demands that all non-humanitarian aid be suspended to any country whose democratically elected leader is deposed in a military coup. If congress interprets what happened in Cairo as a coup, the administration’s hands will be tied. President Obama will have a hard time finding a way around this very specific restriction.

It is highly doubtful that anyone could have foreseen the paradoxes raised by this dilemma. Suddenly, the US is perceived as an ally of the Muslim Brotherhood, at least as far as the Egyptians are concerned. In other words, the US is allied with a movement whose founder, Sayyid Qutb, regarded it as the exemplar of absolute evil, and who called for any hint of influence it has on Muslim society to be utterly eradicated. Another even more surprising paradox is that Israel is now doing everything it can to ensure the continuation of US aid to Egypt. Convinced that it is this aid which keeps the peace treaty with Israel alive, Jerusalem is worried that any suspension would put the peace treaty at risk.

As president, Morsi couldn’t even bring himself to utter the word “Israel.” Nevertheless, he was also quite certain that severing diplomatic ties between the two nations would cause the US to suspend all military aid to Egypt. If that aid stops now, Egypt’s next government will have lost one of the main incentives to maintain its peace agreement with Israel. Should that happen, many opinion-makers in Egypt, including, of course, the official state-run media, will inevitably link Washington’s decision with its ally Israel, accusing Israel of acting behind the scenes against Egypt’s interests. The result would be a very rapid, if not immediate, severing of diplomatic relations. With this scenario looming over Egypt, it is only natural that Israeli officials will do everything in their power to ensure that the flow of aid to Egypt is not suspended.

So let’s get back to the main question: Was it a coup, or wasn’t it? Morsi was voted into office in democratic elections with 52% of the vote. He was deposed after just a year in office when 33 million people took to the streets to protest his failure to keep his promises. At that point, a civil war between Morsi’s supporters and opponents could have erupted at any moment. True, it was the army that actually deposed Morsi, but the generals did not conspire to seize power and establish a totalitarian regime. What happened may not have been precisely democratic, but this is, after all, the Middle East, and a nation that has never known democracy is taking its first steps in that direction.

My Egyptian friend who corresponded with me even claimed that it was our responsibility, as experienced advocates of democracy, to take a good look at what the Egyptian people did and learn a lesson in civics and democracy from it. She insisted that this is what any nation should do when it is fed up with its government for failing to keep its promises. During our dialogue, I thought to myself that what she is saying may actually make sense. Now it is up to Obama to come up with a logical solution to this complex question: Can a state in which the army deposes and appoints its leaders be considered a democracy?