Morsi Never Had a Chance

There isn’t a politician in the world who can provide for the “will of the people” in post-revolutionary Egypt, because the people’s demands are excessive and impossible to fulfill. 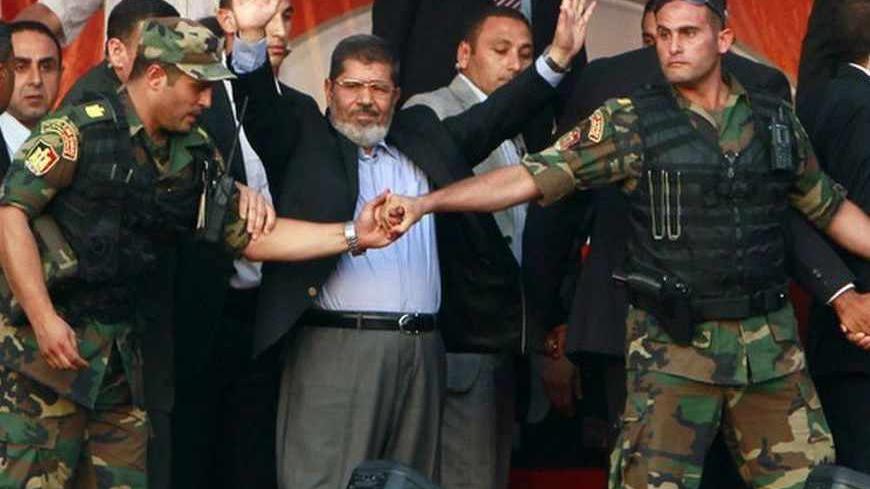 Egypt's then-president-elect Mohammed Morsi waves to his supporters while surrounded by his members of the presidential guard in Cairo's Tahrir Square, June 29, 2012. - REUTERS/Amr Abdallah Dalsh

As soon as Gen. Abdul Fatah Al-Sisi finished reading his dramatic declaration on live TV that Mohammed Morsi had been deposed as president of Egypt, it was obvious that this was a full-fledged military coup.

The army’s seizure of the reins of government was supported by millions of Egyptian citizens, who demanded the overthrow of Morsi and the Muslim Brotherhood. Sisi was surrounded by civilian and religious leaders such as Sheikh al-Azhar and Pope Tawadros II, the head of the Coptic Church. And yet, the future of Egypt still remains hazy.

No one can predict what kind of government will emerge in Egypt after the coup, who will be elected in the upcoming elections once they are announced, what the power of the Muslim Brotherhood will be and even if the Brotherhood will wage an all-out war now that the government has been seized from them.

I visited Egypt just over a year ago, and was able to get a sense of how it felt after the revolution and the aftershocks of former Egyptian president Hosni Mubarak’s removal from power had subsided. It was a riveting experience, at least as far as I was concerned. Mubarak was gone and a military council led by Gen. Mohamed Tantawi managed the country, but the demonstrations continued with almost the same enthusiasm. Every taxi driver, bureaucrat, the receptionist in the hotel where I was staying, the owner of every falafel stand and every other run-of-the-mill citizen I spoke to felt like he could, and should, make history himself.

If Tantawi, or al-Moshier, as he was deferentially known, “doesn’t listen to our voices and do what we tell him, we’ll toss him out at once,” I was told with complete confidence. “The Rais has to do what we want, everything we want. We will not give up on anything.” Someone even dared to say, “If he doesn’t do what the people want, we’ll kill him.” Yes, they were talking about Tantawi, that esteemed general who was carried aloft on the shoulders of throngs of admiring demonstrators.

Then Mohammed Morsi was voted into office in turbulent democratic elections, and Tantawi himself was deposed. Now Morsi has been deposed by Sisi, and the pendulum continues to swing.

There isn’t a politician in the world who can provide for the “will of the people” in post-revolutionary Egypt, because the people’s demands are excessive and impossible to fulfill. Any leader who comes to power on a wave of mass demonstrations must build democratic institutions as quickly as possible. He must overcome the chaos, improve the economy and bring back the tourists who kept away from the Land of the Nile. Most of all, he must mollify the restless masses and get millions of demonstrators back to their humdrum lives, back to work.

Wherever millions of people believe that the president is a puppet who moves at their whim like some weathervane, it is safe to assume that the president will not last more than a year in office. Nevertheless, Morsi’s failure is both personal and painful.

Many years from now, the Muslim Brotherhood will be forced to assess where its senior members went wrong, and especially where their president failed. How could he lose power so clumsily within just a year, thereby obliterating his movement’s historic achievement after decades of persecution? To make matters worse, even when he heard the roar of the crowd calling for him to be deposed, he remained completely oblivious.

One thing is certain. Morsi didn’t pick up on the one thing that Iran's Ayatollah Khomeini realized after the Shah was deposed, or, in a much different manner, what the Hamas movement realized once it came to power, even though Hamas is actually a protégé and acolyte of the Muslim Brotherhood in Gaza.

In Iran, as soon as the shah was deposed, Khomeni founded the Revolutionary Guard Corps as a counterbalance to the Iranian army, parts of which were still loyal to the shah and the old regime. Thus, he succeeded in stealing the young people’s revolution right out from under them. Shapour Bakhtiar, who was appointed as the interim president, was immediately deposed in disgrace, and the Revolutionary Guard quickly became a militia charged with defending the new regime of Iran’s ayatollahs. This new regime tightened its grip on the institutions of government, suppressing any opposition, or even suspicion of opposition, with brutal force.

The same thing happened with Hamas. As soon as the Hamas movement won the elections in the Palestinian Authority, then-interior minister Said Seyam (who was assassinated in Operation Cast Lead), established the “Implementation Forces,” or Hamas’ army, which later spearheaded the movement’s coup in the Gaza Strip.

In contrast, Morsi chose the pragmatic path of reconciliation, but also of indecision, and sometimes even that of confrontation. He really wanted to appease the Brothers who made him their candidate after Khairat el-Shater was disqualified. Nevertheless, once he was elected, he not only forgot that the army felt no loyalty toward the Muslim Brotherhood, not even when they rose to power, and even more so after he deposed Tantawi and appointed Sisi in his place, only to be deposed by Sisi himself.

Perhaps it was because Morsi didn’t emerge from the ranks of the Egyptian army, but he seemed to be oblivious to the one thing that every researcher and Middle East scholar knows: the real role and status of Egypt’s army. Morsi busied himself with the Sharia-informed constitution in an effort to appease his masters, and came into conflict with the Supreme Court judges. What he forgot was that his predecessor, who was much stronger than him, was easily deposed by the army.

Morsi forgot what so many others before him had learned: There is no middle way. There is either the way of force, as was used in Iran and Gaza, or there is the alternative path of meeting the will of the people. Given the expectations of millions of Egyptians who thought that they would enjoy the fruits of their revolution overnight and that Egypt would become a veritable paradise in the Middle East, Morsi didn’t have a chance.

Just like the Nile, Egypt’s life-giving artery which is fed from two sources, the White Nile and the Blue Nile, Egypt flows along two parallel paths that meet at a certain point in Tahrir Square. There are millions of civilians foaming and frothing as they surge forward, bearing a single army on their shoulders with respect and admiration. Will the two succeed in elevating someone who will be able to unite everyone?

That is the question, and as we have already noted, no one can possibly know the answer yet. But just like Egypt’s vital artery, Egypt itself still faces a long and winding road ahead.