Israel has become part of an unexpected alliance with the Gulf countries, Egypt and Jordan, all disappointed by the US administration's lack of Middle East understanding. 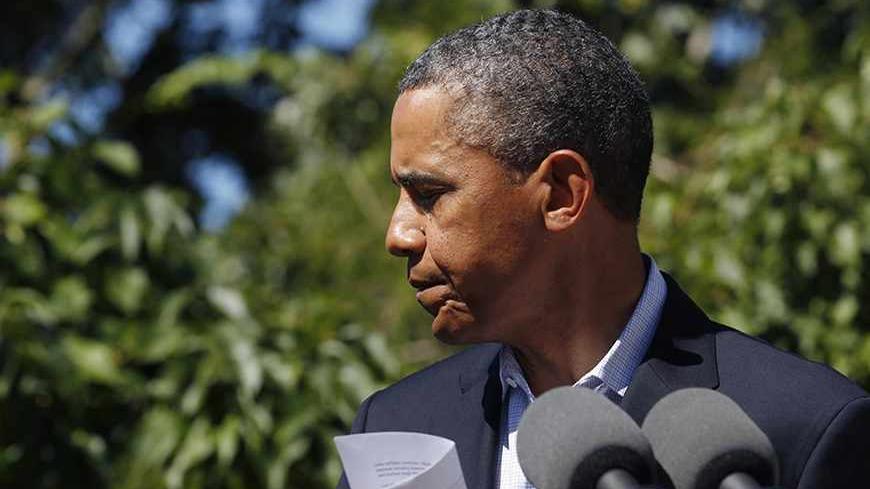 US President Barack Obama begins to walk away after speaking about the violence in Egypt while at his rental vacation home on the Massachusetts island of Martha's Vineyard in Chilmark, Aug. 15, 2013. - REUTERS/Larry Downing

The deadly terrorist attack that took place near the Iranian Embassy in Beirut on Nov. 19 could not have happened at a more sensitive juncture. Taking place a day before the resumption of the talks between Iran and the major powers in Geneva and ahead of a possible signing of an agreement, it also coincided with the visit of French President François Hollande to Israel, which, for its part, scared and alarmed the whole world with its apocalyptic prophecies about the "surrender agreement" with Iran. It occurred while the Middle East was seething and more volatile than it has ever been. It is no wonder that Iran, in an unusual fashion, was quick to point a finger at Israel, holding it accountable for the terrorist act.

Officially, Israel has emphatically denied involvement. The Israeli security officials with whom I spoke sniggered: "Israel has never used suicide bombers. This does not exist in our culture nor do we have any interest in interfering in the war raging between Sunnis and Shiites in the Middle East in general, and in Syria and Lebanon in particular."

The hint of the Israeli officials is all too clear. The attack, according to assessments in Israel, was carried out by a militant terrorist Sunni organization with a highly developed operational infrastructure and top-notch execution capability. The attack itself, experts believe, was complex and hard to carry out. Its results were deadly. According to information available at this point, the Iranian cultural attaché to Lebanon was killed in the blast. A cultural attaché is oftentimes a euphemistic way of referring to a member of the Revolutionary Guard. If this information was correct, the perpetrators accomplished their objective.

The story is both complex and simple. An all-out war is taking place between the Shiites and Sunnis in the Middle East, with Syria being the main and exposed battlefield. Hezbollah has sided — openly and in large numbers — with Syrian President Bashar al-Assad against the Sunnis. Now the Sunnis have come to Beirut, to the backyard of Sheikh Hassan Nasrallah, the organization's secretary-general, to tell him with a stentorian voice: You cannot avoid your accountability. You're in way too deep. Anyone serving Iran on Syrian soil will find Iran's enemies in his own back yard, in Beirut.

Nasrallah has known this for many months, for after all this was not the first terror attack in the Lebanese capital. However, it seems to me that today he got a better grasp of the message than ever before. The chief of staff of Israel Defense Forces (IDF) Lt.-Gen. Benny Gantz said in June that "fire began licking Nasrallah's robe." This fire by now has already gone wild.

Not far from this arena, events are also taking place in what was once called the “moderate axis” in the Middle East. What holds this axis together is being referred to as the “doctrine of American betrayal.” By abandoning, betraying or neglecting its long-standing allies in the region, the United States has brought these countries closer together. “This is a funny paradox,” a well-versed senior Israeli minister told me about two weeks ago. “Take the relationship with Egypt, for example. They — the Egyptians — have realized that the Americans simply don’t get the Middle East. The Americans will invariably do the least right thing at any given point in time. On the other hand, all the regional players know full well that Israel understands the Middle East inside out. This paradox — the waning standing of the United States — brings the neighboring countries closer to us, Israel, including the ones with which we do not maintain diplomatic ties.

“The most striking manifestation of this phenomenon is the relationship with Egypt,” the minister went on to explain. “Yet it applies to relationships with many other important elements in the region. They now understand the Israeli doctrine, knowing that, unlike others, Israel will not simply back away from previous policies or agreements.”

The “organization of countries damaged by American Middle Eastern policy” consists today of Egypt, Israel, Saudi Arabia, Kuwait, the United Arab Emirates and to a lesser extent Jordan. Turkey has also been damaged, albeit for other reasons (because it is a member of the Muslim Brotherhood camp.) That’s why Ankara is not an active participant, but more of an external observer, similar to the status of the Palestinians in the United Nations. Qatar remains on the sidelines, trying to stir every pot.

The edifying story of this bizarre alliance is the American betrayal of Egypt’s former president, Hosni Mubarak. While the story has been widely covered, the exact details have yet to be published. The chain of events is relayed at discreet meetings that are constantly taking place between various elements in the region, including Israel.

Saudis, Kuwaitis, Jordanians, Egyptians and others get together to reconstruct that fateful week in Egyptian history. And this is how the story unfolds. When the demonstrations in Egypt broke out, Mubarak quickly understood that this was it; the story was over. His son Gamal (Jimmy) would not become the next president. The dynasty had been nipped in the bud. He even explained it to his wife, Suzanne, who found it hard to come to terms with this state of affairs. At the same time, Mubarak appointed Ahmed Shafik Zaki as prime minister while starting to negotiate with the opposition and the demonstrators.

At that stage, the Americans should have understood that that was the right way to go about it, namely having an orderly transition of power in Egypt ahead of a general election. Mubarak should be allowed to step down with dignity, his head held high. They should not have thrown out the baby with the bath water. But ever since US President Barack Obama took office, the Americans no longer viewed Mubarak as the asset he used to be — the regional “rock,” as Israel’s President Shimon Peres once called him. On two occasions — once in Cairo and once Ankara — Obama delivered speeches “over” Mubarak’s head, humiliating him and letting the masses in Egypt and the leaders across the Middle East understand that as far as they — the Americans — were concerned, he was a spent force.

The anti-Mubarak protests in Tahrir Square confirmed that the people had indeed been fed up with him. But the Muslim Brotherhood did not raid Tahrir Square, but stayed put in its mosques. What Tahrir Square saw were the young and educated who had come of age only to realize they had no money to pay for dowry, leaving them unable to get married. They realized they could not leave their parents’ home because they could not afford to get their own place.

Understanding that it was all over, Mubarak, as noted earlier, appointed Shafik, who, in turn, embarked on negotiations. The public atmosphere started stabilizing. The masses began to understand that Mubarak was phasing out. At some point, the Muslim Brotherhood started realizing that too, joining the negotiations with Shafik. And then, three days after the Muslim Brotherhood joined the talks, the Americans made their habitual, stupid mistake, giving Mubarak an ultimatum: Leave, and do so summarily. It was Gen. Mohamed Tantawi who received the order from Washington, over the phone, putting the gun on the desk of the betrayed president. Recognizing that his head had been lopped off and thrown to the dogs, Mubarak resigned and took off to Sharm el-Sheikh. The rest is history.

What was the American motive? They were infatuated with the “Turkish model,” being utterly convinced that it could work for Egypt as well. The Muslim Brotherhood, according to the Americans, was the solution. Incidentally, the Brotherhood had no plan to participate in the first political round. It was not vying for the presidency. What it wanted was to let someone else rack his brains and then show up and collect the dividends. But it was the American policy that placed the temptation right in front of the Muslim Brotherhood, which it subsequently found irresistible.

And then it was time for the election between Ahmed Shafik — the candidate of the secular, sane Egypt, and the Muslim Brotherhood’s Mohammed Morsi. The result was kind of a draw, with each side proclaiming victory. Morsi announced his victory and Shafik planned to contest this in court. Tantawi wanted to take advantage of the bedlam and appoint Shafik. Now take a guess who stepped in? You got it right: the Americans. They issued an ultimatum: Morsi won and thus Morsi would be named president. As far as the Americans were concerned, it was either Morsi or chaos. Tantawi picked up on the hint and acted accordingly. Morsi was appointed. And it was then, as we all know, that chaos broke out.

The American gamble on the Muslim Brotherhood as a model for a moderate, political Islam that faithfully represents the Egyptian people is very reminiscent of the gamble of Prime Minister Benjamin Netanyahu and Sheldon Adelson on Republican presidential hopeful Mitt Romney. Today all sides know that was a bad call; Obama for his part and Bibi (Netanyahu) and Adelson for theirs. But they cannot rewrite history.

One could have expected the Americans to correct their course on the go, allowing Gen. Abdel Fattah al-Sisi to complete the coup and transition the country into democracy. However, the Americans keep playing the role of bouncers who are totally clueless about reality and are easily offended.

Despite heavy Israeli pressure aimed at relaxing their attitude vis-à-vis Sisi, the Americans kept sticking to their original mistake, ignoring any hard facts that don’t align with their outlook. They still persist in believing that what took the peoples of the West hundreds of years to work out could be replicated in the Middle East within just a year or two.

Sisi is the man of the hour in Egypt. Israel monitors him very closely. A high-ranking Israeli security official talks about Sisi in the same terms that the latter speaks of himself: the new late Egyptian leader Gamal Abdel Nasser, or — to put it differently — “the successor.”

Sisi plays the part. On the anniversary of Nasser’s death, Sisi visited Nasser’s tomb. The Egyptian media suddenly received childhood photos of the venerated general saluting his beloved president. Sisi is the new Nasser. He will restore pride to Egypt, putting back a smile on the faces of the Egyptian people. To this end, Sisi needs the Americans. But the Americans make sure to always be at the wrong place at the wrong time, and vice versa. They’re now betraying Sisi, who, in turn, finds consolation in the billions of dollars he has been receiving from Saudi Arabia and Kuwait (Qatar is vacillating) and the new large arms deals with Russia and China.

As noted, the Americans will not rest until they’ve totally destroyed what the previous administration had so painstakingly built in the Middle East. They’re on the right track.

Against this backdrop, it is easy to understand what officials in Jerusalem, Riyadh, Cairo, Kuwait City, Amman and in many other places are feeling.

Ready for an American strike in Syria, the Jordanians were left high and dry. The Saudis are already taking initial steps toward a large nuclear deal with Pakistan. The princes of the Gulf, the insurgents in Syria (the few that are not affiliated with al-Qaeda) and even the Turks — each one of them awaits their turn for the American betrayal. And the problem with the Americans is that they indeed do deliver.