The security lockdown is a reaction to rising sectarian tensions and two bombs hitting Hezbollah’s stronghold in southern Beirut in two months. 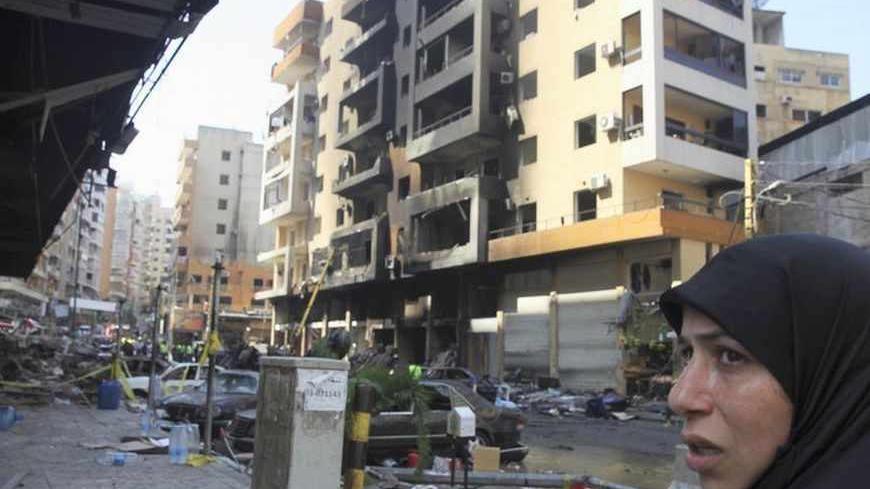 A woman reacts as she looks at the site of a car bombing in Beirut's southern suburbs, Aug. 16, 2013. - REUTERS/Sharif Karim

Following two major bombings in Beirut’s southern suburbs (Hezbollah’s largest Shiite stronghold) in less than two months, Hezbollah decided to place the area under security lockdown. It has set up checkpoints, with explosives detection devices and bomb-sniffing dogs at all entrances linking it to Beirut. Under these procedures — which resemble an announcement that the party is in a state of maximum alert facing the war of explosives — every car entering the southern suburbs has to spend nearly two hours before being able to cross checkpoints set up by Hezbollah at all entrances and at the beginning of the main streets.

Informed sources revealed that the plan to lock down Beirut’s southern suburbs was ready a long time ago. It was planned as an exceptional measure that would be implemented on the ground once the party felt that there is an external decision to wage a security war against its positions and to terrorize the areas of its popular base. The terror actions are thought to be aimed at making  the base feel that the cost of supporting Hezbollah is exorbitant, and that the only way it can safeguard its interests and security is through disengagement from the party.

The move to place Hezbollah’s areas under security lockdown represents the highest level of protection the party has planned for in order  to face the most difficult security and political scenarios that might threaten it.

The psychology of residing in the fortress

The plan to lock down the southern suburbs, where nearly 1 million residents live, has been in effect for more than two weeks. Under the security lockdown, these residents feel that they live in a locked-down fortress, something that raises conflicting feelings. First is the compulsion to endorse this measure, given that it is the most effective way to prevent the tragedy of car bombs — sent by radical Salafist militants into their neighborhoods to be detonated in crowded residential areas — from being repeated. Yet, this feeling of being protected is combined with a feeling that is likely to grow if the plan to lock down their area continues in place for a longer period of time. That is a feeling of being isolated and living in "a locked-down ghetto" or "a big prison," suggesting that the aspects of a normal life are decreasing.

For its part, Hezbollah is trying to minimize the impact of this feeling on the residents of the southern suburbs by organizing popular activities designed to boost their morale, and encouraging the public to find ways to overcome feelings of isolation. Just two days following the Aug. 15 bombing in Ruwais — which killed 27 people, wounded hundreds of others, and reduced an entire neighborhood to rubble — a young man and woman who are members of Hezbollah decided to hold their wedding ceremony at the site of ​​the explosion. This scene — with the two wearing festive clothing, carrying red roses, and announcing their marriage in the afflicted Ruwais neighborhood, where traces of the blood of women and children who had died were still on the ground — was a message from Hezbollah to the residents of area themselves. It was a message urging them to persist and announce that they will continue to live their lives, amid conditions that have turned their neighborhood into a large, locked-down prison, as much as it is a message to provoke despair among those who were behind the bombing, by ​​suggesting that the bombings will not work and will not lead them to their goals.

Residents of the southern suburbs have mixed feelings regarding the new security situation they have found themselves stuck in. In general, though, they are inclined to show "feelings of defiance" and accept the security lockdown measures imposed by Hezbollah as an inevitable means of protecting their families from being killed by indiscriminate bombings. However, with each new day under lockdown, the suburbs’ residents feel that their lives have clearly been disrupted and that they are turning into besieged citizens of the ghetto, even if they themselves are making the decision.

Most of the southern suburbs’ citizens interviewed by Al-Monitor showed resentment when asked if they think the lockdown will last for long. Underlying this answer are feelings of loss of trust in the future and uncertainty as to their lost security.

A woman in her early 50s working as a teacher in a school in the neighborhood of Haret Hreik, in the southern suburbs, said, "When the bomb exploded in Ruwais, I felt like I wanted to leave Lebanon to live in another, safer country."

She added, "Following Hezbollah’s security lockdown in the suburbs, I really felt that I had moved to the safe country that I had dreamed of after the bombing." This answer reveals the psychological state of a social segment that accounts for a high percentage of those living and working within the suburbs. The individuals of this group rarely go to Beirut, although it is just about a 15-minute drive. They prefer to ensure security within their region over all other considerations, even if this means making it difficult to commute to other neighboring regions. In this respect, their answers were interesting even if they all had the same content.

Zainab Murah, a housewife working in commerce in the suburbs, told Al-Monitor, "I don’t care about checkpoints at the entrances to the suburbs since I usually barely get out." She added, "We want security, and Hezbollah, thanks to its intensive checkpoints, makes us feel that this requirement is being met."

Another 50-year-old resident of the suburbs working at a shoe factory there said that these measures make him feel empowered in the face of criminals. He noted, "Yes, life here has become more difficult, but not impossible."

A high percentage of boys, whose ages range between 18 and 20, residing within the southern suburbs, show enthusiasm in their approval of Hezbollah’s measures. They are driven by their ideological or moral fervor for the party to raise their fists, while reiterating the most popular slogan of the Iranian Revolution: "Hayhat Minal Zillah!" (Martyrdom rather than slavery!), as well as "Labbayka Nasrallah!" (Hail Nasrallah! An oath of loyalty to Hezbollah Secretary-General Hassan Nasrallah). There is, however, a silent group that is significant in number. Their silence should be cautiously considered as an expression of a political stance that decisively rejects the prevailing political reality led by Hezbollah in the suburbs. For example, a shopkeeper in the Shiite neighborhood refused to answer Al-Monitor’s questions. Each time there was an attempt to break his silence, the expressions on his face left a message showing that he was confused about the right thing to do considering the circumstances.

For their part, middle-class citizens living in the suburbs and working in Beirut expressed moral discontent, which has yet to turn into political discontent. Their reproach is that "they have come to feel as if they reside in another country, even though they are still within Lebanese territory."

Ahmad Khalifa, a 30-year-old man with a master’s degree in telecommunications working at a telecom company in Beirut, does not see how he can continue to work if the security measures taken in the suburbs go on much longer. Speaking to Al-Monitor, he said, "The company will not accept me arriving two hours late every day, since I have to stop for more than an hour at checkpoints. It would better for me to find a job here in the suburbs where I live." Regarding the security lockdown procedures, he said, "We are forced to accept a tough and non-practical choice. Yet, if I had to choose between death and a difficult life I would choose life." Khalifa wonders about a better option, answering, "I just don’t know."

It is worth mentioning that the expression "I don’t know" has been frequently repeated by young people, in particular the educated youth and those working in private companies outside the southern suburbs. A sociology professor at the Lebanese University who lives in the suburbs and preferred to remain anonymous, said that the frequency of this expression is due to the dual convictions of the suburbs’ educated social group that is not associated with the special economic cycle of Hezbollah. On the one hand, this group respects the achievements and sacrifices of Hezbollah, and on the other hand it does not want to pay the price of Hezbollah’s confrontation with Western states and rich countries in the region.

Adel Baydoun is a 60-year-old merchant who, due to the nature of his work, is forced to commute daily between the suburbs and Beirut. He says, "I started working as a merchant in Africa and then decided to return to Lebanon several years ago. I told myself: enough living abroad. And now I hear that the Lebanese migrants in Africa, and particularly the Shiites, are being kidnapped by Mossad [the Israeli intelligence service]. Then again, here in the suburbs, we are also being murdered by Salafist terrorists. I feel that my children and I are trapped and following Hezbollah’s severe protective measures, I feel it would be easier for me to go to America than Beirut."

Baydoun continues, "Most of my family members have been living in Michigan for decades now. I can communicate with them via Skype faster than I can reach my colleagues in Beirut or Sidon." Regarding possible solutions, he says, "There is no solution in our country. There is a solution for the whole region, since everyone, not only us, is forced to settle in the smallest geographical area to survive." Baydoun laughs and continues, "Hezbollah is not the only party who has isolated itself, America has closed its diplomatic missions in most of the countries in the region for the same reason, fearing that Salafist terrorists might break into their embassies and threaten their staff."

At times, Al-Monitor withholds the bylines of our correspondents for the protection of our authors. Different authors may have written the individual stories identified