For the first time in decades, the Lebanese army has taken over security in Beirut’s southern suburbs — Hezbollah’s traditional stronghold — leading some to hope that this step can be applied throughout the country. 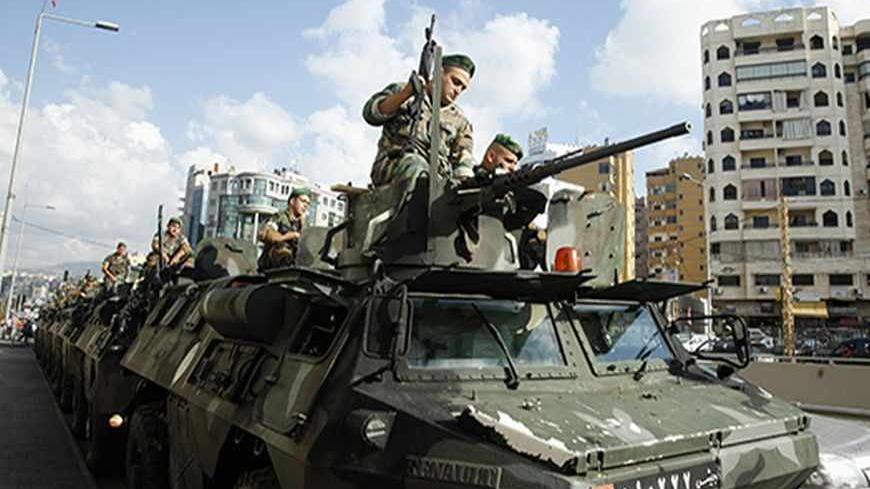 A correspondent in Beirut
September 30, 2013

A few small units of the Lebanese army and Internal Security Forces (ISF) recently entered the Dahiyeh neighborhood, Hezbollah’s stronghold in southern Beirut. Over the course of the last several years, the Lebanese security establishment had maintained a merely symbolic presence in the area, since Hezbollah had established its own security zones. The latter provided unseen protection for areas in which the group’s various facilities and leaders — particularly those involving anti-Israeli operations — operated.

This deployment comes in response to the two bombings that struck Dahiyeh in the latter half of the summer: one in Bir al-Abed and the other in the neighborhood of Ruwais. On Sept. 24, local newspapers reported that Lebanese security sources had leaked new information concerning the perpetrators of the attack in Ruwais. According to those sources, the bombings were executed by Syrian and Lebanese Salafists connected to an extremist fundamentalist group in Syria. Hezbollah remains fearful that similar bombings will be directed against its stronghold in Dahiyeh, since the party responsible for the previous bombing is seeking to pressure Hezbollah into withdrawing its military units from Syria.

This fear has required Hezbollah to draw up and implement its own security contingency plans within Dahiyeh, setting up checkpoints along the main thoroughfares and neighborhoods and ordering its units to begin exercising the functions of the state in examining passing cars and corroborating the identities of their occupants. However, sources close to the party have revealed to Al-Monitor that Hezbollah’s leadership realized several weeks into these contingency plans that their continuation will harm Hezbollah’s relationship with the inhabitants of Dahiyeh, which have so far been the most enthusiastically supportive element of the party’s social base. This conclusion rests on the growing frustration of Dahiyeh’s inhabitants with Hezbollah’s establishment of checkpoints that interrupt the flow of traffic and cause suffocating congestion at the suburb’s entrances and exits, and within its various neighborhoods.

In addition to this, despite the party’s stress on discipline within its ranks, some of those manning the checkpoints have committed certain excesses. Afraid that the friction between Dahiyeh’s residents might deepen and evolve — in time — into an open clash between the party and its social base in Beirut, Hezbollah’s leadership opted to search for an exit strategy. On the one hand, it sought to guarantee ongoing surveillance of Dahiyeh, to prevent expected bomb attacks in the future. On the other, it desired an alternative that would allow it to remove its personnel and checkpoints from Dahiyeh's streets. The ideal decision — from the party’s standpoint — was to open its stronghold to the entrance of state security forces, so that they could provide protection from future attacks threatening the area.

Although only a few members of the Lebanese army, internal security and general security forces entered Dahiyeh several days ago, it remains a development fraught with political symbolism and significance. Traditionally, Dahiyeh had been a closed security zone area under the exclusive control of Hezbollah, and the presence of Lebanese security forces in the suburb had been all but nonexistent. Even the Lebanese army was forced to coordinate in advance with Hezbollah if it wished to enter one of the neighborhoods to undertake a security operation. But with the army carrying out the mission of protecting Dahiyeh from being targeted by explosions, it has established a presence within Dahiyeh’s various neighborhoods, executing security missions as if in a normal fashion.

Despite the fact that Hezbollah’s request that the state deploy the Lebanese army in Dahiyeh was dictated by the party’s objective needs, the mere fact that it is taking place must be considered an important political development for the following considerations.

First, this step allows — for the first time in several decades — for the creation of a degree of direct coexistence between the institutions of the Lebanese state and the social base in Dahiyeh, which contains nearly a quarter of a million Lebanese citizens of the Shiite community — or approximately a quarter of the total Shiite population of Lebanon.This demographic has been effectively cut off from the culture of “official Lebanese security” since the beginning of the Lebanese civil war in 1975. Since then, the story of the relationship between Dahiyeh and the Lebanese security establishment has been defined by a series of clashes down to the present day. After the Taif Agreement — which ended the civil war — the reach of the Lebanese state’s security establishment was effectively barred from Dahiyeh. Hezbollah’s security zones were accorded de facto recognition by the state, since they were connected to the needs of defending the resistance.

The second reason for viewing the deployment of Lebanese military forces into Dahiyeh as a development of high political significance lies in the potential this step harbors for encouraging their deployment throughout all areas of Lebanon. It is no secret that the state’s writ has receded in many parts of the country. In wide stretches of northern Lebanon, for example, the Lebanese military establishment shares control with a number of fundamentalist Salafist groups. This situation prevails particularly in the capital of the northern part of the country, Tripoli. In the Bekaa Valley, there are geographic regions such as the city of Arsal along the border with Syria where the army cannot enter. It is considered to be the rear operating base for armed Syrian rebel groups allied with Lebanese Salafist groups, whose members hail from the city and its environs. The same dynamic prevails in Akkar, which has witnessed in recent months more than one armed clash between armed Islamist groups and the Lebanese army. Sidon, southern Lebanon's largest city, also witnessed violent clashes this past summer that lasted nearly 48 hours between Lebanese security forces and the followers of Salafist Sheikh Ahmad al-Assir, who had established his own security perimeter in the suburb of Abra. Assir attempted to take control over all of Sidon, leading the army to eliminate his military presence there.

It is true that Hezbollah has shown restraint in its regions, but it has nevertheless exercised total security control over those regions. All the illegal security outposts in more than one Lebanese region have long conditioned the surrender of their arms to the army, with the latter first putting an end to Hezbollah’s security zones. Therefore, the entrance of the Lebanese army in Hezbollah’s most populous stronghold — Dahiyeh — has created a positive security climate whose spread throughout Lebanon’s various regions should be encouraged by the Lebanese state. A great deal hinges upon gradually expanding the writ of the Lebanese state into Dahiyeh. After its experiment in the past several weeks with attempting to erect a self-defense force for its own areas, Hezbollah has arrived at the conclusion that the social base — which accepted it as a force of “resistance” — will not accept it as an alternative to the state.