Al-Monitor tours Beirut’s southern suburbs, a stronghold of Hezbollah, to learn more about life there and residents’ views on Hezbollah’s Syria policy. 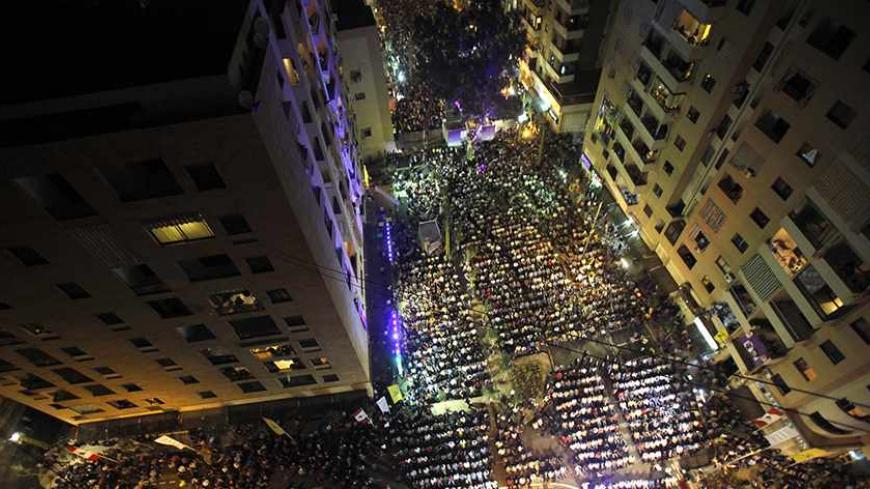 When walking in Beirut’s southern suburbs, Hezbollah’s main stronghold, one encounters scores of pictures of the party’s martyrs, their funerals and banners bearing slogans about the jihad in Syria. Checkpoints and security men are deployed everywhere, making the area feel like a large military garrison near the front. Everyone talks about the fighting and is braced for new developments amid the escalating sectarian crisis in Lebanon.

The lifestyle of the southern suburbs is quite different from that in other areas of Beirut. Poverty and economic problems are visible and widespread. Religious identity is manifested in architectural features and social customs that clearly set this area apart from the rest of Beirut. There are also clear linguistic and cultural elements that point to the rural origins of the majority of people living there, many of them having been displaced from their southern villages in the last decades of the 20th century by the Israeli occupation and economic deprivation.

Although religious identity is a dominant feature, few residents appear to be religious extremists. In fact, one senses the opposite — tolerance and respect for individualism and religious beliefs. Women are free to wear the veil and make other choices in dress. Christian families still live in the southern suburbs in an environment of full personal and religious freedoms.

Al-Monitor met with a number of Christian families to inquire about their situation. Some still remember how they were once the majority in the area, before years of internal warfare forced most of them to leave, turning those who remained into a minority among a Shiite majority. The Christians there are satisfied overall and said they feel no religious or social pressures or tensions. Hezbollah’s treatment of the Christians in Lebanon and Syria, especially when compared to that by the Salafists, has helped in bringing Lebanon’s Shiites and Christians closer in general.

Of course, religious tolerance in the southern suburbs does not mean that the area is a lack in cultural specificity. Unlike in the rest of Beirut, there are no liquor stores, bars or nightclubs in the area. There is an unwritten code to refrain from economic activity contrary to Islamic law. Thus, during holidays, many young people leave the area to go to the bars, discos and nightclubs of Jounieh, Hamra or other neighborhoods of Beirut.

The area’s political affiliation with Hezbollah and the Amal movement is prominently displayed. No competing political movement is allowed to establish a presence in the suburbs. Hezbollah security elements have been deployed on all streets and alleys, especially after the November bombing at the Iranian Embassy. Photos and images of Hezbollah leader Hassan Nasrallah, Ayatollah Ruhollah Khomeini and Supreme Leader Ayatollah Ali Khamenei, in addition to the party’s martyrs, are everywhere. One is also made aware of an Iranian presence in overheard telephone or personal conversations in Persian.

Hezbollah’s absolute authority in the southern suburbs does not preclude critical views being expressed about the party's activities in the region. In an interview with Al-Monitor, one female college student who belongs to a family with leadership positions in the party, asked rhetorically, “Why should we sacrifice our children and our lives in Syria and on other fronts to serve Iran’s regional and political interests?” She said other party members are wondering the same thing, noting that there is a silent element that opposes the party’s policy in Syria but does not speak out, either from fear or to avoid discord.

Al-Monitor met a number of mid-level party members who confirmed the student’s claims. They said that Hezbollah’s enemies, meaning the Salafist jihadists, had become more violent, leading the party’s internal critics to show little interest in weakening the party’s position in fighting them. They pointed out that there are some prominent Shiite figures critical of Hezbollah who continue to express their opinions in newspapers.

The southern suburbs’ social and political situation are heavily dependent on Hezbollah’s status, while the party itself is susceptible to the currently protective environment there. The party may soon, however, experience fundamental shifts as a result of regional events and developments in Syria and Lebanon.