The inability of Israelis to decide whether the Oslo Accords were an achievement or a failure may be proof that peace is not likely to arrive very soon. 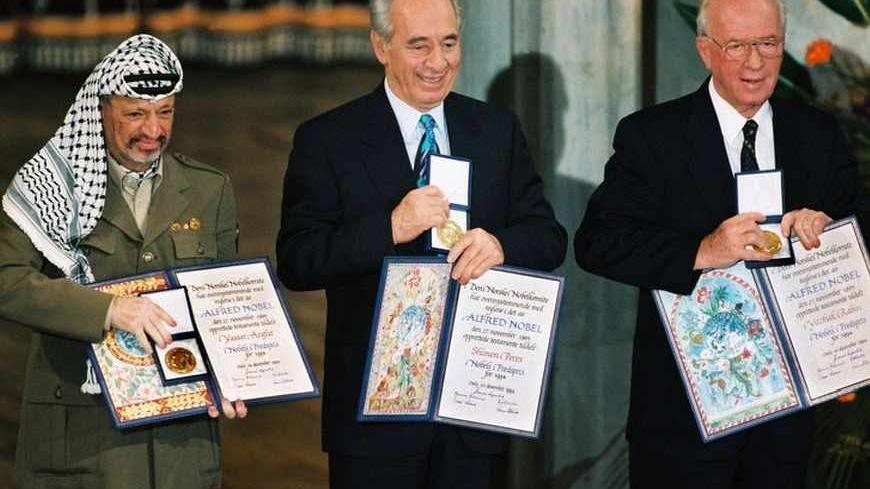 I remember the night well, at the editorial desk of Hadashot, which has long since folded, the emotional columns loaded onto the carefully designed pages. I also remember the discussion at the office of the chief editor, Yoel Esteron. It was clear that there would be a celebratory headline, but above it would also appear a kicker, which would ultimately spark disagreement within the newspaper and anger some readers. I think the kicker read, “Arafat has not denounced terror.”

It was a pinch of salt sprinkled at the height of the excitement on the night the Oslo Accords were signed in Washington by Israel and the Palestine Liberation Organization. The next day, the phones rang, and furious letters were sent. Why ruin it, asked disappointed readers? Why highlight this point in particular, and in our paper, the paper of those who support peace?

In retrospect, there is no point in accounting for the wisdom in the wording of that sour headline, and it is uncertain whether the calculation is even possible. Indeed, exactly 20 years after Oslo — the secret agreement was signed in the capital of Norway on Aug. 20, 1993, and the public ceremony at the White House took place on Sep. 13 — there is no consensus on important questions: Has the accord failed, and [if so] who is to blame? Did it point the way for the next generations even though it did not immediately bring peace? Did it contain potential that was missed, or could it be that it was based on a conceptual error of those involved? Did mishaps along the way stem from misunderstanding or from malice? Did those involved really mean it or was it no more than a clever fraud?

Those who would say Oslo was a “failure” would point out that peace has not arrived, that violence has increased and that most of the Israeli public has long been sick of the agreement. Fifty-seven percent of respondents in a Maariv survey published Aug. 16 declared that the signing “has hurt Israel from a diplomatic, security and economic standpoint.” On the other hand, the Israelis who would say it was an “achievement” or “breakthrough” would recall that a more successful instrument for an Israeli-Palestinian agreement has not been found, and that after two decades, the two sides are talking again, at this moment, about that very old formula whose origin is in Oslo. An Israel Hayom survey conducted in July found that 52.7% of the public supports a “solution of two states for two peoples,” even if most of them oppose the Palestinian demands that would make such an agreement achievable. So, achievement or failure?

The Oslo agreement is not the only diplomatic act Israelis have difficulty interpreting, even such a long time after it was supposedly decided. Was the [May 2000] withdrawal from Lebanon a success? As a tactical maneuver, it occurred without causalities, but as a strategic measure, it may be that it provided a tailwind for the second intifada [which began in Sept. 2002], and sowed the seeds for the [2006] Second Lebanon War. Was the Lebanon war a failure? Certainly it felt like one to the public now, but in its wake quiet has been maintained for quite a few years, and those who conducted it are convinced that history will judge them favorably. Was the  [2005] disengagement from Gaza a success? Settlements were evacuated with no bloodshed, and the Israel Defense Forces (IDF) are no longer bleeding at the Philadelphi route [buffer zone between Gaza and Egypt]. Hamas, however, brought the Qassam regime to Gaza, so the south [of Israel] is not quiet.

Each of these major events did not conclude decisively, but with a dispute whose end is difficult to envision. It is possible that in the future we will be able to look at them with more clarity, but it is also possible that we never will.

We tend to imagine that at one time, the world was more tidy, that it was easier to distinguish between what was successful and what was botched. History, however, can be deceptive, altering its verdict with changing circumstances. The Six-Day War [of 1967] was considered to be an overwhelming success when it ended and for much longer, but Israel continues to pay for it today — the price of dealing with a never-ending occupation.

The [1979] peace agreement with Egypt raised spirits when it was signed, but was accompanied by the grave doubts of many Israelis who opposed it. The doubts dissipated, or almost dissipated, after the tragic murder of former Egyptian president Anwar Sadat [in 1981], when it became clear that Egypt would stick with the agreement even after the death of the leader who had signed it. Indeed, a year ago it became clear that even a government led by the Muslim Brotherhood would continue to honor it — another sign that, surely, that peace succeeded.

Events whose results are difficult to interpret create two problems. First, the absence of a ruling on success leads to misunderstandings, sometimes fatal, in the interpretation of reality and ramifications. The military analyst Zeev Schiff, who passed away six years ago this summer, highlighted this point in an article he wrote at the beginning of the second intifada. “There is no issue that has had greater influence on Palestinian thinking — in connection with the present intifada — than the IDF’s withdrawal from southern Lebanon and Hezbollah’s struggle against Israel,” he wrote. The Palestinians thought they could repeat what Hezbollah achieved in southern Lebanon in their fight against Israel in the West Bank.

In his article, Schiff recalled that it was not the first time that the two sides, the Israelis and the Arabs, had drawn “opposite conclusions from the same event.” The War of Attrition ended in this way at the beginning of the seventies: Israel concluded that Egypt would not dare strike again, and Egypt concluded that it would not be defeated again like it was in the Six-Day War. The result was another war.

What did the Palestinians conclude from the [1973] Yom Kippur War and the peace with Egypt that followed it? According to Schiff, it was the mistaken conclusion that Israel had withdrawn from Sinai only because of its numerous casualties in battle. In other words, from this too they gathered that on their way to a state, they would have to kill a lot of Israelis.

There is, as mentioned, second problem caused by doubt. Given an inability to define a diplomatic act as an achievement or a failure, the natural and understandable default is to do nothing. If we do not know why Oslo failed, it would be difficult to design a diplomatic process to skirt the obstacles that made it a failure. If there is no agreement on where it still has value, there is no point in trying to reconstruct a similar diplomatic process.

An Israel that does not know how to set criteria for achievement and failure is an Israel that would prefer to refrain from diplomatic activity. An Israel that 20 years after Oslo is still pondering what happened and why peace has not yet arrived will not hurry to proceed along a new path. Put simply, it could be that the ongoing arguing over what happened at Oslo is proof that the conditions for peace are not yet ripe.

Shmuel Rosner is a Tel Aviv–based columnist, editor and think tank fellow. He is senior political editor for the Jewish Journal and writes the blog "Rosner's Domain." He writes weekly for The International Herald Tribune and The New York Times. Rosner is a fellow at the Jewish People Policy Institute and the chief nonfiction editor for Israel’s largest publishing house, Kinneret-Zmora-Dvir. On Twitter: @rosnersdomain