The overreaction of the Israeli right to the supreme court decision on illegal immigrants reflects its self-perception as a persecuted opposition, not as the party in power. 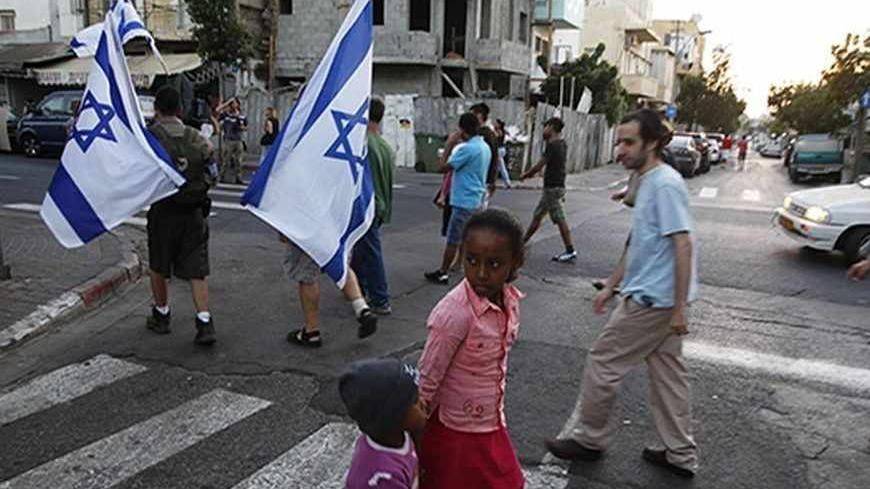 Children cross the street as residents of south Tel Aviv carry Israeli flags during a protest against African migrants living in their neighborhoods, May 30, 2012. - REUTERS/Baz Ratner
Shmuel Rosner
@@rosnersdomain
September 18, 2013

The Israeli High Court of Justice has a not entirely justified image as an institution which often intervenes in matters that are none of its business. Not entirely justified, but not unfounded, either, as nine of its justices proved this week [Sept.16] when they ruled unanimously to overturn the amendment to the anti-infiltration bill. The Knesset passed the amendment, with the support of Prime Minister Benjamin Netanyahu, in 2012. It enabled the state to jail infiltrators without trial for three years, a period which the court described as “disproportionate.”

Israel’s court system provides three accepted tests of proportionality: compatibility between the measures adopted by the authorities and their purpose; the existence of less damaging measures serving the same purpose; and, that the benefits far outweigh the damage caused by violating the rights of those affected. Of course, even when using these tests, proportionality remains a relative term.

In the case of the anti-infiltration law, what the judges considered disproportionate was deemed totally proportionate by the executive branch, as well as the legislative branch and many of Israel’s citizens, especially those living where illegal infiltrators tend to live. Israel has to employ stringent measures to prevent infiltration into its territory, for security, social and economic reasons. It’s an unpleasant but necessary task. From here on, it's about interpretation: to what extent the measures are necessary and how they can be successfully implemented.

The infiltrators, as Judge Uzi Fogelman wrote, have the “right to freedom and the right to dignity as provided by the basic law for every human being.” Justice Edna Arbel noted that “the result of this ruling will not be easy for the Israeli public,” which also has rights. The court assumes that the government of Israel “will find a way to deal with the situation with the means at its disposal.” Perhaps it will find a way, and perhaps not. “Dealing” with the situation is also a relative term: Let’s say that as a result of the court decision there are an additional 500 infiltrators annually — will it then seem proportionate, too? And if it results in an additional 5,000 infiltrators? And what about another 20,000?

One can certainly argue with the court’s stand and with the question of what constitutes proportionate measures to prevent infiltration. It’s harder to argue with the lack of proportionality exhibited by Knesset members from the right wing in response to the ruling. The chairman of the ruling coalition, Likud party member Yariv Levin, termed the decision “a new peak of irresponsibility” and “an insane decision.” Housing Minister Uri Ariel stated that the High Court “does not enable the state to combat … illegal infiltration.” Interior Minister Gideon Sa'ar called the ruling “a grave mistake, a miserable error.”

Knesset Member Ayelet Shaked of HaBayit HaYehudi party said, “The Supreme Court has, in effect, voided the protective wall erected by the Knesset against the tidal waves of labor migrants, thereby laying bare the country’s borders once again.” The only thing one can say in Shaked’s defense is that she meticulously adheres to her right to avoid any appearance of understatement.

More than these reactions indicate the inherent weakness of the judges’ decision, they indicate the mental state of the Israeli right wing. The right wing rules. For most of the past years the right has been in power. It has been holding the reins for years, making decisions, passing laws, pointing the way. Nonetheless, the political right keeps behaving as if it were a subversive, persecuted minority. As if some powerful imaginary “left wing” institutions were about to oust it from power any minute or, at least, to impose on it their policies. There are many reasons for this, some better than others, some structural-political, some psychological, some the result of the diplomatic blockade imposed on Israel, some stemming from the often irresponsible behavior of left-wing lawmakers.

The amendment to the anti-infiltration bill highlighted the right wing’s flawed behavior, twice. As lawmakers, representatives of the right wing try hard to prove ideological steadfastness, failing to internalize that being in power entails a certain amount of balance and responsibility and a willingness to leave noisy populism to parties which are not in power and only have recourse to such tools to wield influence. Subsequently, when facing the court, representatives of the right wing have a hard time accepting criticism and insist on seeing any iota of opposition to their decisions as a fatal onslaught on their very ability to rule.

This is embarrassing. It’s especially embarrassing for those who accept the basic assumptions of the anti-infiltration legislation. Hysteria is not an attribute of rulers. Excessive emotionalism is not an attribute of rulers. Loudness is not an attribute of rulers. The right wing would have been better off displaying more self-restraint, more self-respect. They could have done so during the debate on the proposed legislation, with a conscious decision not to be dragged into overly radical measures, with a conscious decision to try, at first, to make do with less than stipulated — let’s say a year’s imprisonment, and not three. And, of course, they could have done so this week, following the ruling. A measured and elegant response would have sufficed — for example, thanking the court for forcing the state to re-examine its ways, in fact, for doing its duty in providing checks and balances to the organs of power.

This does not mean the High Court was right or wrong in its ruling. As stated above, proportionality, despite its meaning, can only be measured in retrospect. If it turns out in a year or two that the infiltration problem has been aggravated in the wake of and as a distinct result of the court ruling, one might be able to argue that the court applied a flawed rule.

If, on the other hand, the state is able to implement its justified policy of reducing further the number of infiltrators, the court will turn out to have been right and the violation of the infiltrators’ rights to have been excessive. Either way, the court sought to do what it views as its job. And, given the new limitations imposed by the court, which are far from tying the government’s hands, it’s once again the turn of those who truly hold power: the authorities.

Shmuel Rosner is a Tel Aviv-based columnist, editor and think-tank fellow. He is the senior political editor for the Jewish Journal and writes the daily blog "Rosner's Domain." He writes weekly for The International Herald Tribune and The New York Times. Rosner is a fellow at The Jewish People Policy Institute (JPPI) and the chief nonfiction editor for Israel’s largest publishing house, Kinneret-Zmora-Dvir. On Twitter: @rosnersdomain