The altercation between French Cultural Attaché Marion Fesneau-Castaing and Israeli soldiers at a West Bank village was an act of provocation, undermining Israel's authority. 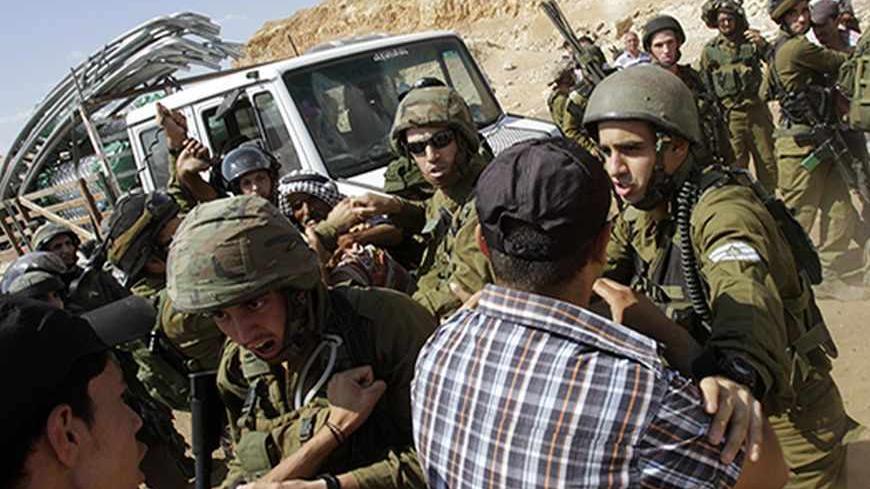 It was an insignificant incident in an insignificant corner of the world. At the center of the dispute was Marion Fesneau-Castaing, cultural attaché at the French Consulate in Jerusalem. She and some of her colleagues, most of them European Union diplomats, showed up in the Jordan Valley last week, on Sept. 20, to provide tents and other equipment to Palestinians whose village had been demolished by Israel. The Israel Defense Forces (IDF) attempted to prevent them from entering the area and handing out the supplies, but the diplomats were insistent. The atmosphere deteriorated quickly. Here a push, there a shove, here a curse, there a tug, and Fesneau-Castaing found herself sprawled on the ground. She claimed that the soldiers had been violent. According to her, and to the EU’s high commissioner on foreign affairs, who rushed to demand clarification from Israel and to condemn its actions, the soldiers had been violent.

Let’s be frank. We’ve seen IDF troops act violently under similar circumstances. In this particular incident, Israel responded that the French diplomat had slapped a soldier, that she had been the one who acted violently. There is even a short film clip that substantiates this claim, but it must also be admitted that the film clip is not entirely convincing. Fesneau-Castaing did extend her hand toward the border policeman’s face. She was obviously upset, but she barely hurt him. If that is all she did, he could have shown some composure and ignored her.

The real question is why Fesneau-Castaing was there in the first place. What was she hoping to do there, and what were all the other brave diplomats from other countries hoping to do there with her? They say that they had gone to ensure that international law was observed. They went to protect the local residents. That is their “diplomatic” way of saying that they went to sabotage Israel’s policies intentionally. In other words, Israel is hosting representatives of foreign states who take advantage of its protection to engage in conflict with its soldiers and to prevent it from exercising its authority in areas under its control.

The source of the controversy is Israel’s decision to demolish buildings in the village of Khaled Makhul (also Khirbet al-Makhoul). It was certainly an unpleasant decision of the kind that doesn’t look good on tape. It is only natural that the Palestinians living in that controversial pile of tin shacks would be opposed to this decision. They attempted to prevent it, and they were joined by various human rights organizations. It is good that such human rights organizations exist, and it is good that there is someone who is trying to protect the weaker segments of the population. It is good that the case brought by Khaled Makhul’s residents made it all the way to the Supreme Court. This is the same court that forced the government to release people who entered the country illegally from three-year prison sentences without trial, causing an uproar on the right. Had the Supreme Court ruled that the village of Khaled Makhul should not be demolished, European diplomats would have applauded, and the state of Israel would have obeyed. This time, however, the judges ruled differently: Israel has the right to demolish Khaled Makhul. As is accepted in such cases, Israel acted within the confines of the law and demolished the village. And as has been customary, European diplomats set out to sabotage that decision. After all, it didn’t conform to their worldview.

Try to imagine the opposite happening. In that scenario an Israeli diplomat sets out to protest some action or other by the French government and is caught punching a member of the French security forces in the face. Imagine that the Israeli diplomat entered a closed military zone in a foreign country, shoved soldiers, cursed at them, and tried to prevent them from implementing a decision by the local courts. Imagine that the Israeli diplomat openly tried to undermine the policies of the country that was hosting him. While Israel has a well-known reputation for chutzpah, bluntness, and even for brusqueness, it is still hard to imagine such a scenario actually taking place.

European diplomats who arrive in Israel and stage such dramas for themselves and for those who sent them do so knowing full well that IDF soldiers will never hurt them, not really. We can assume that not one of them would ever dare raise a hand against a soldier in any other country in the region, for instance against a Syrian soldier in the army of President Bashar al-Assad.

In any case, it is easy to get lost in the ridiculous war of conflicting versions of this kindergarten war: He started it. No, she started it. No, they were violent. No, it was a pure act of provocation. Alternately, it can be assumed that there was definitely a soldier there, if not two, who failed to show the necessary restraint, who tugged at a shirt at the wrong moment, who did not exhibit maximum composure. That is quite possible too, but there is only one thing about which there can be no doubt whatsoever: The cultural attaché was not there to engage in a civilized debate. She was looking for trouble, and she found it. Israel’s Foreign Ministry responded acerbically to the incident, calling it an “unnecessary provocation.” From Israel’s perspective, it was completely unnecessary, but as far as the foreign diplomats were concerned, they had achieved their purpose.

From this point onward, it’s all a power play. Every effort should be made to rein in these diplomats, who are stationed in Israel to sabotage its policies intentionally. It is no easy task. They have the backing of powerful governments with which Israel has a decided interest in maintaining cordial relationships. On the other hand, it sometimes becomes necessary to set boundaries and to declare that Israel will not accept their being crossed, as seems to have been the case this time. A few days after the incident, it was reported that the diplomat in question will end her mission in Israel by the end of the year. We should only wish that for her next mission she will be posted in a country where she can show real courage, confronting soldiers who are less practiced in maintaining the dignity of foreign diplomats.

Shmuel Rosner is a Tel Aviv–based columnist, editor and think tank fellow. He is senior political editor for the Jewish Journal and writes the blog "Rosner's Domain." He writes weekly for The International Herald Tribune and The New York Times. Rosner is a fellow at the Jewish People Policy Institute and the chief nonfiction editor for Israel’s largest publishing house, Kinneret-Zmora-Dvir. On Twitter: @rosnersdomain