The faces of Yemen’s executive cabinet may have changed, but the same inefficiencies and failures reminiscent of the old government still haunt the country. 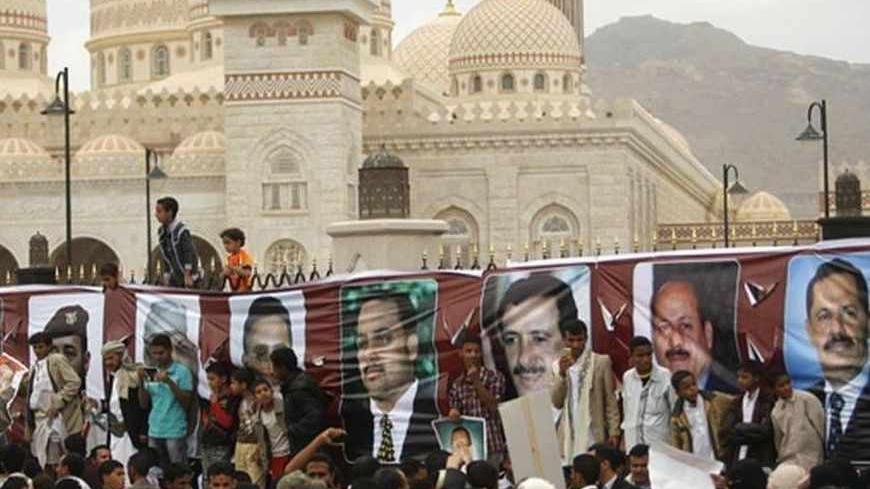 People gather next to posters of former Yemeni officials who were injured along with the country's former President Ali Abdullah Saleh in the June 2011 bomb attack at the Presidential Palace, in Sanaa, May 17, 2013. - REUTERS/Khaled Abdullah

Yemenis describe the head of the current national accord government, Mohammed Basindawa, as being "weak and honest." This characterization was made more than a year and a half after he took office, following the signing by the Yemeni political parties of the Gulf Initiative as a way out of the impasse that almost slipped into a terrifying civil war in 2011.

The exit from the specter of war did not take Yemenis to the paradise they have dreamed of. The former regime divided the government portfolios with the alliance of revolutionary forces that ran against it. The ministerial portfolios of what was supposed to be a national salvation government were distributed as shares (rewards), and contested by the same political forces in the cabinet who were brought in to fix the situation and end the conflict on the ground between partners of influence and ministerial portfolios.

The government raised the citizens’ expectations much more than they demanded at the time. Citizens only dreamed of keeping the specter of war away from their children. At the same time, the international community made promises to provide unlimited support for the process of political transition in Yemen, as a model that is expected to succeed through dialogue. This led the government to announce the largest financial budget in the history of the country. The budget includes a clear list of the expenses. However, its resources remained murky until the government announced a deficit in revenue. Thus, it was compelled to negotiate with donor institutions to receive a soft loan to fill the gap between expenditure and revenue. The government was on the verge of collapse when news was leaked about the donors stipulating that the government implement a price scale by partially eliminating subsidies for fuel derivatives. The government’s plan to implement this condition was met with angry reactions, and the opposing powers took advantage of the situation and mobilized the provoked street against it.

The average citizen counted on the new government faces representing the revolutionary forces, since most are names that have not been tainted by corruption, such as the ministers of the former ruling General People's Congress (GPC) — who are monopolizing half of the ministerial portfolios, and who are former ministers tested in more than one government. However, the disappointment came from the top levels, when the first signs of failure by ministries held by representatives of the revolutionary forces — such as the finance, electricity, interior, and planning ministries — began to appear.

Current Minister of Finance Sakhr al-Wajeeh is the most recognized parliamentarian who fought the corruption of previous governments. However, he was unable to fix the flaw when he was expected to take action. He was no longer given the opportunity to engage in debates, which had made him a star. Furthermore, he is not a specialist in financial matters, except for his limited financial experience in parliament.

Minister of Electricity Saleh Shomia is a security officer who served as minister of expatriates under former President Ali Abdullah Saleh, a post which he later left. When he joined the revolutionary forces, he used to accuse the former regime of corruption and of being unable to provide basic services to citizens, including electricity. But when he assumed a leadership position, he failed to fulfill the promises he made before holding the electricity portfolio. He was even accused of involvement in procedurally illegal deals to provide emergency electricity for a number of areas. These accusations could have been overlooked or denied had the minister succeeded in securing the capital and major cities with electricity. However, attacks against power lines between Marib (in the east) and the capital have increased at an unprecedented pace, except during the conflict that took place in 2011, which affected all aspects of life.

The Ministry of Interior has the minimum responsibility to secure power transmission lines and oil and gas pipelines, and to limit the spread of arms in the major cities. Interior Minister Abdulqader Qahtain is associated with the main parties that rebelled against the former regime. The Ministry of Interior did not succeed much in its functions — such as arresting the people known to have killed two young innocent men at the center of the capital, who are protected by a religious tribal chieftain affiliated with the same party that nominated the minister for office. Also, the ministry announced in the media the names of the suspected bombers of the oil and gas pipelines and power lines. However, the ministry did not make any concerted effort to capture them and bring them to justice. This made it an object of ridicule and resulted in the anger of citizens in general.

Both the president and the prime minister expressed displeasure with the performance of the government and talked about its leniency in dealing with outlaws. The president gave the government several deadlines to hunt down those accused of attacking the oil pipelines and power lines. Still, the attacks continued, which was an embarrassment and raised doubts regarding the ability of a government that pays monthly salaries for hundreds of thousands of personnel and army and police officers. Meanwhile, it failed to arrest scores who are known by name and address. But the most confusing step was the dismantling of a military brigade from the Marib Governorate and the distribution of its members over several camps, after its success in limiting the carrying and use of weapons in one of Yemen’s most lawless governorates.

The same thing happened recently to a brigade commander in the governorate of Taiz who had succeeded in exposing several deals for weapons smuggled to Yemen comprising thousands of pieces. The commander was replaced without explanation. However, the indicators suggest that the step was made under the influence of arms traffickers and warmongers, whom President Abed Rabbo Mansour Hadi had accused of attempting to pressure the state through attacks on oil and energy pipelines after it tightened the noose and limited their activities for the benefit of the state.

Air force Commander Maj. Gen. Rashid al-Jund surprised the public almost two months ago by announcing that air force planes are being targeted from the ground with firearms that shoot them down, and that the security services did not assume its tasks in this regard.

Yemen received pledges by donors worth almost $8 billion, most of which remain mere promises that have not yet been fulfilled. Donors — behind closed doors — blame the Yemeni government. The Ministry of Planning and International Cooperation has failed to devise plans to accommodate the pre-announced aid. Although the ministry recently announced the finalization of plans to accommodate most announced pledges, the situation did not change on the ground. The balance of payments in the public budget is still higher than the balance of revenue. This transferred the wave of dissatisfaction with the performance of the government from the Yemeni street to donors of the international community, which plays a pivotal role in Yemen and brought about the government through its political initiative.

During the Friends of Yemen conference held in London in March, the closing statement expressed concern over the high expenses in the Yemeni government budget, especially those relating to salaries and subsidies of oil derivatives. The statement also criticized the government’s slow tax reforms and called on it to expedite the submission of plans to accommodate donor funds. However, the technical apparatus established by a presidential decree to accommodate donor funds remains without a head due to differences between the donors and the Yemeni Ministry of Planning. Whatever the reason, these differences certainly ran against the interests of the Yemeni citizens.

In such a situation, the conflicts between the parties participating in the government over the appointment of their cadres in leadership posts become public — as happened with the appointment of agents of the Ministry of Finance a few weeks ago — and the subsequent protests by the Nasserist and socialist parties over the monopolization of their partner in the Joint Meeting Party alliance (the Islamist Islah party) on the positions referred to. Some allied forces have launched smear campaigns against ministers from parties that are allied to it, which seemingly aim to prevent or monopolize interests they enjoyed or are trying to obtain. This creates a growing public impression that the forces who came to power are unworthy of it, cannot be entrusted with the interests of the citizens and forgot all their revolutionary speeches as soon as they came to power. They then focused on working for the interests of their parties, individuals and groups.

The president’s wrath over the government's performance was clearly expressed in the media. But the nature and composition of the government, which is composed of rival forces on the ground; the prime minister’s defense of some of its positions; its appearance as weak, unstable and incapable of defending the policy of his government and without the courage to resign and leave the opportunity for others; and Hadi’s fear of the collapse of the national consensus awaited by many prevented him from dismissing the government or changing some of its faces.

The government still blames all its failures on the previous regime, whether the latter’s legacy of corruption and bankruptcy, or its current conspiracies — according to its ministers — seeking its failure. Although there is some logic to these claims, the government cannot blame all its failures on the former regime or misuse of power, because the balance of power has changed in its favor, and the people are on its side if they sense credibility in its rhetoric or performance.

The most dangerous outcome of the weak government performance — especially at the security and economic levels — is the formation of primitive forces based on religious or regional affiliation, due to the political void which the government has failed to fill. This void will be filled irrespective of the nature or origin of those who will fill it.

The examples given about the failed performance of the current Yemeni government may have been confined to the ministries held by ministers affiliated with the youth revolution — or more precisely, the forces who directed the wave of the youth and then tightened control over them. While most of the public rage seems to be directed toward those ministers who were in the opposition before 2011, this does not mean that the ministers of the other half of the government representing the former ruling party, the GPC, are doing a better job in any way. However, it shows that the hopes, ambitions and expectations of the Yemeni people counted on the performance of ministers of the revolutionary forces, who they haven’t tested. However, they have heard their speeches against the corruption of the Saleh era and the men of his party. Thus, they presumed that they are the opposite and would save them from corruption and abuse of power. The Yemeni people were deeply disappointed, which led them to compare between the national reconciliation government and its predecessors under Saleh. This is the last thing the current authority — both president and government — needs. The president is not content with the government, but lacks the ability to take action against it. This could turn the table against the president and the political transition process of the whole country.