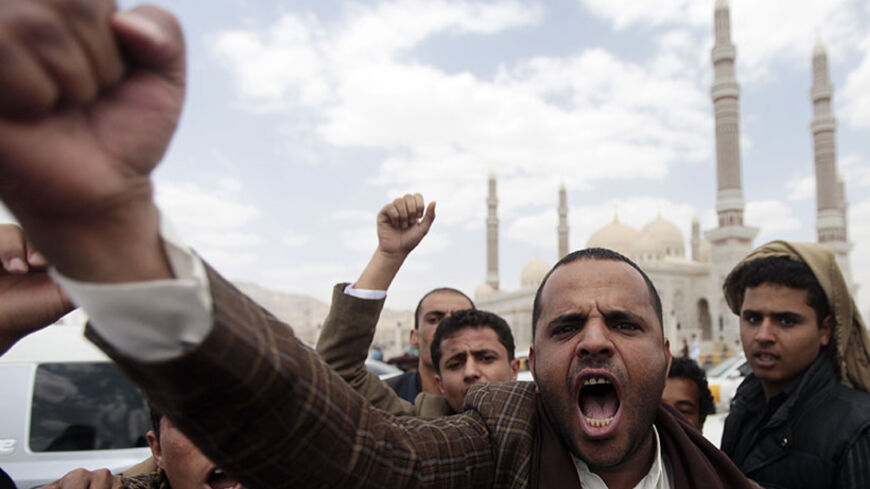 In a sudden turn of events, tension has flared between Yemeni President Abed Rabbo Mansour Hadi and former President Ali Abdullah Saleh. The most recent and prominent manifestation of this rivalry was when members of the presidential guard, which is under Hadi's authority, attacked and looted equipment from the headquarters of the Saleh-affiliated al-Yaman al-Youm TV channel on June 11. Afterward, Hadi’s forces surrounded Sanaa’s largest mosque — Al-Saleh Mosque, which Saleh built and named after himself — for five days. Saleh has always used this mosque as a platform for political and religious mobilization.

The mosque crisis ended after nearly a week, in an agreement between the two men to establish a presidential protection unit for Hadi, in addition to providing protection to the mosque affiliated with Saleh and ban any rhetoric from its pulpit to provoke the president. Despite the relative calm in the neighboring areas after the agreement, and the reopening of roads, the cease-fire does not necessarily mean peace, as the crisis between the two men continues to escalate.

In the days before the agreement, tanks, military vehicles and soldiers surrounded the mosque and closed its access roads, while dozens of masked and heavily armed tribesmen were seen in the surrounding streets and in other Sanaa neighborhoods.

The crisis broke out on June 11, when — as witnessed by Al-Monitor — angry demonstrators swept the capital, cut off the streets and burned tires to protest against scarce fuel, long queues at gas stations that reached 1 kilometer (0.6 miles) in some places and power outages of more than 20 hours a day in the capital and other cities.

Streets were blocked and tires were burned a few meters from Hadi’s home, where he practices his duties but that he rarely leaves.

The demonstrations startled the authorities, prompting Hadi to reshuffle the Cabinet and replace five ministers, including the ministers of finance, oil and electricity. This is the first time in Yemen’s history that a government is reshuffled in the middle of the day. Traditionally, Cabinets are reshuffled after 9 p.m., the time of the official news report.

During the demonstrations, some protesters raised pictures of Saleh and expressed nostalgia for his reign, while criticizing the situation under his successor Hadi. This raised the ire of Hadi and exacerbated the growing tension between the two men. Hadi accused Saleh of planning the demonstrations and exploiting the citizens’ needs to create political chaos in the country.

Al-Yaman al-Youm TV, which was attacked by Hadi’s presidential guards, is the most powerful tool owned by Saleh in sending his political messages and in criticizing the situation and the leaders after he handed over power. The channel is also promoting his son Ahmed, who was being groomed as Saleh’s successor before the latter was ousted in the 2011 revolution. After the revolution, Hadi isolated Ahmed from the leadership of the elite forces of the Yemeni army — the Yemeni Republican Guard — thus ending Saleh’s tight grasp on the army’s joints.

Although al-Yaman al-Youm has openly criticized Hadi and the transition process, it is difficult to think why Hadi reacted this way other than because he is sensitive to any opposition. Yemeni and foreign media outlets are not tolerated by Yemeni authorities, including outlets with opposing views to al-Yaman al-Youm.

In the past two months, Yemeni authorities have deported American journalist Adam Baron and prevented Al Jazeera’s crew from covering the war with al-Qaeda in Shabwa province. The government returned the crew to Sanaa by helicopter. Yemeni soldiers also prevented the Arab News Channel crew from covering the June 11 protests on Hael Street in the center of Sanaa.

After the attack on al-Yaman al-Youm, the official Al-Thawra newspaper published an editorial on June 14 that justified the channel’s closure and sent a strong message to other media outlets.

However, the presidency realized that it went too far, prompting a source close to Hadi to issue a statement on June 14 saying that Hadi took the decision to close the channel in his capacity as the secretary-general of the General People’s Congress (GPC). According to the statement, the channel did not abide by the requirements of the political settlement and the rules and principles of national partnership.

Despite the worsening and noticeable security tension in the capital and Saleh holding several meetings with armed tribesmen during the past few days, the worst thing caused by the Saleh-Hadi crisis is the sharp division in the GPC, the strongest party in the country and to which both men belong.

After the attack on the TV channel, Saleh presided over extraordinary meetings of the GPC’s General Committee. The meetings resulted in a statement on June 14 condemning the attack, calling for returning the stolen equipment and bringing the perpetrators to justice. It also rejected the government reshuffling carried out by Hadi at the expense of the GPC’s share in the national reconciliation government and the removal of some GPC ministers in favor of those close to Hadi. The statement fanned the crisis and threatened to hold new elections for the party leadership, which means ousting Hadi as the secretary-general.

Saleh is desperately trying to stay on top of the GPC, which is his last political resort. The bigger irony is that the two men are fighting over the party’s leadership while both of their party mandates have expired. Party elections were supposed to be held in 2009, but never happened.

Contrary to the expectations in 2011, the recent crisis shows that Hadi has failed as a political leader in controlling the GPC, despite his success as a military leader in controlling army units such as the Republican Guards and the Central Security Organization, which were controlled by Saleh.

Also, Hadi’s attempt to control the GPC by attacking al-Yaman al-Youm TV and besieging the Al-Saleh Mosque seemed like an attempt to achieve political objectives through military means.

Since the outbreak of the crisis, Hadi has held several meetings with the 10 countries sponsoring the Gulf Initiative.

A European diplomat told Al-Monitor on condition of anonymity that these 10 countries are at a loss as to how to deal with the crisis, considering that some believe that Saleh wants to sabotage the transition process. But they do not have many options. They support Hadi’s recent moves against the media, but they cannot express that support, according to the diplomat. The statement issued by the 10 countries on June 16 invited the government and the media to work out a code of conduct. It was the first statement that expresses the international community’s support, though reservedly, to Hadi and his dealing with the economic and humanitarian crisis.

The tension between the two men coincided with the end of a fragile truce between the Houthis and the army in Amran province. There were also armed attacks against the army in the south. The number of those in need of humanitarian aid in Yemen has reached 14.7 million Yemenis, according to the United Nations.

Perhaps the factor that will be most decisive in resolving the crisis between the two men is the position of Saudi Arabia regarding this crisis. Saudi Arabia remains influential in Yemen, and Saleh greatly depends on Saudi political support. At the same time, Saudi checks are critical to the Yemeni government in facing the ailing economy.