Palestinians living between Israel's separation barrier and the Green Line are cut off from the rest of the West Bank and deprived of basic services. 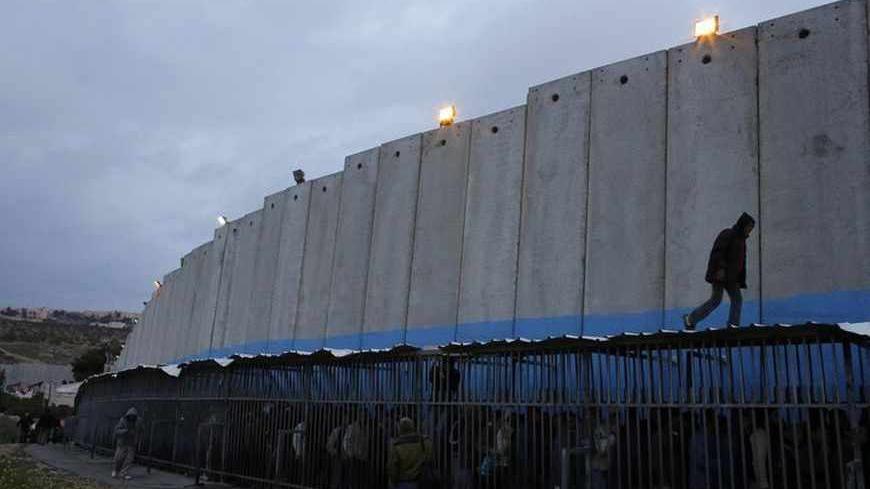 Palestinian laborers queue next to a section of the controversial Israeli barrier wall as they wait to cross into Jerusalem at an Israeli checkpoint in the West Bank town of Bethlehem, March 18, 2013. - REUTERS/Ammar Awad

The land between the 1967 armistice line, the so-called Green Line, and the separation barrier being built by Israel in and around the West Bank is referred to as the seam zone. Many of the Palestinians living there hold West Bank ID cards, but their homes are on the western, or "Israeli side," of the barrier. While some have received Jerusalem identification cards allowing them to stay in their homes and move freely in Israel and the West Bank, others have only the West Bank permit, making them technically illegal in their own homes.

Two such people are Ruqayya and her mother Kefayah. When the wall was built through the village of Hizma, north of Jerusalem, their family’s three houses were separated from the rest of the village.

“We are stuck here. We live disconnected from the world because no one can visit [our homes] without getting a permit to cross the checkpoint,” Kefayah told Al-Monitor at her daughter’s house. She added that when she had to go to the hospital urgently last year, she had to be carried to the Hizma checkpoint because Palestinian cars and ambulances are not allowed in the seam zone.

Surrounding the three small houses are rows and rows of apartment complexes in the Israeli settlement of Pisgat Ze’ev. The residents of the houses all hold West Bank IDs, but since they live on the "wrong side" of the separation barrier, to go anywhere they must to walk to and cross the checkpoint, which is about a kilometer away — every time Ruqayya needs to do her grocery shopping, when the kids go to school and when Kefayah has checkups at the hospital. When Ruqayya wants to see her husband, she also has to cross the checkpoint. He was among the original 37 people who once lived in the houses, but his name was erased from the list of people allowed to cross the checkpoint to get to their homes.

The Society of St. Yves Catholic Center for Human Rights is helping the family reunite. Speaking to Al-Monitor at his office in Jerusalem, Raffoul Rofa, a lawyer and director of the society, explained that as Israel has deemed Ruqayya’s husband, Ahmed, a "security threat," his experience tells him it will not be easy. Since Ahmed was permitted to pass the checkpoint up until 2008, he hopes that this proves to the court that the excuse is dubious and only serves to split up a family. Rofa explained that the problems faced by Palestinians in the seam zone go far beyond the case of Ahmed.

“The fact is that they are not able to live in their own houses legally. They need permits which grant access to their homes only, not to Jerusalem or Tel Aviv,” he said, explaining that often a specific route is designated between the house and the checkpoint. If people deviate this route, they face legal consequences, such as being denied permits and getting a criminal record.

The Palestinians who find themselves or their land caught inside the seam zone confront a number of problems due to their dependency on what Rofa called an “unfair permit system.”

He told Al-Monitor, “People tend not to get permits because they are labeled a security threat. People are separated from their families. People are not given agricultural permits to go work on their land beyond the wall and even have to travel long distances to access their land through checkpoints while they used to be next to their homes. Or they are only given permits during certain seasons, for example, during olive harvest season, and kept away for the rest of the year.”

Rofa also noted that the permit system makes people vulnerable. In the case of Ruqayya and her family, their permits exist only as a list of names at the checkpoint. If Israel decides to empty these areas, they can just stop issuing permits or cross their names off the list, he revealed.

“It is causing many families to either leave their homes or live under a lot of uncertainty and pressure. It has to be kept in mind that it was Israel that decided on this route for the separation wall. At least what they should do for the Palestinians who they kept on the Jerusalem side, is to give them the right to stay in their homes and the benefits they are entitled to,” Rofa asserted.

Despite their houses only being a few hundred meters from modern Israeli apartments, Ruqayya and Kefayah’s homes are not connected to a sewage system or water supply. The family members are not considered residents of Jerusalem by the municipality and therefore do not receive benefits and services. As the Palestinian Authority cannot access the area, it is also prevented from providing services.

On the Palestinian side of the checkpoint, Al-Monitor met Ahmed at his mother’s house. He said that his wife and children visit a few days a week, but when they were not there he feels lonely and frustrated.

“It’s a catastrophe. I drive the kids to the checkpoint. They cross and look back at me and don’t understand why I can’t go with them,” he said.