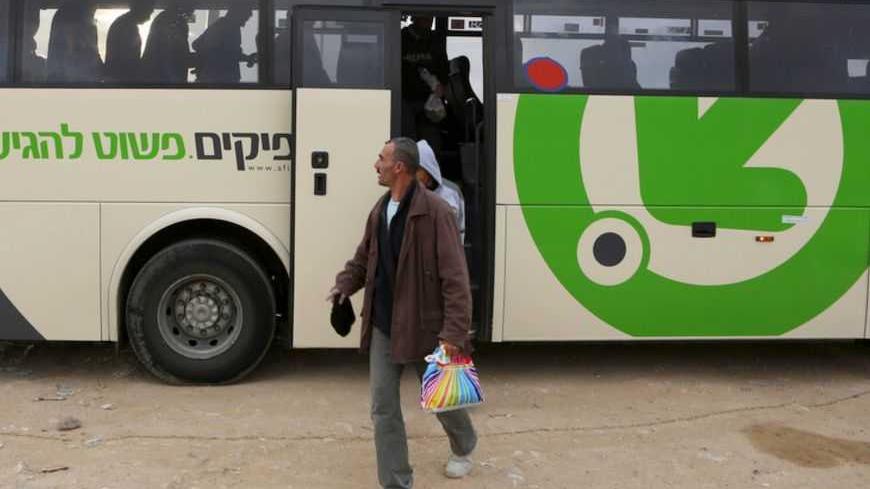 Laborers disembark a "Palestinians-only" bus before passing through the Eyal checkpoint as they return to the West Bank, March 4, 2013. - REUTERS/Baz Ratner

Israel launched two new bus lines on March 4 for Palestinians working in Israel. Even before it began operations, the service had attracted worldwide attention as left-wing politicians and local and international human rights advocates accused Israel of implementing racial segregation and made comparisons to the situation in the United States before the civil rights movement of the 1950s and 1960s.

Early on the morning of March 5, however, among the Palestinian workers coming through the Eyal checkpoint, there was enthusiasm for the new buses. Exiting the checkpoint, they rushed across the parking lot, past the honking drivers of private minivans who normally would take the laborers to their respective destinations. A few of the workers who stopped to speak told Al-Monitor that the new buses are cheaper, safer and run more direct routes than other options.

“Before I had to take two buses — one to the central station and one with the settlers,” said Ahmed Mohammed, a young worker from Nablus. He had missed riding the new buses the day before because there were not enough seats to accommodate what he estimates to be the 6,000 Palestinians leaving from Eyal each morning. He hoped more Israeli buses would be dispatched.

According to the news site Ynet, Israeli authorities only advertised the new buses in Arabic and in Palestinian villages, thus leading to their being dubbed "Palestinians-only" buses. Quoting official sources, Ynet reported that the bus lines were launched following pressure from Israeli settlers. Ben Hur, director of Afikim, the Israeli public bus company, denied this when he spoke with Al-Monitor by phone on March 5.

“That’s not true. It’s not a new Palestinian bus line, but buses that offer Palestinians an alternative and better service,” said Hur.

Challenging allegations of enforcing segregated bus lines, Hur has tried to ensure the public that Palestinians with legal permits to work in Israel can still ride the other, regular bus lines. Speaking to Al-Monitor in Tel Aviv, however, Daphne Banai said that segregation already exists — on and off the bus.

"The new buses are the buses they take from a Palestinian checkpoint. This is already segregated because Israelis have different checkpoints,” said Banai, who is part of Machsom Watch, an Israeli women’s organization that monitors checkpoints, and the civil disobedience group Lo Metsaytot (We Do Not Obey) .

While Palestinians cannot enter Israel using Israeli public transportation, they can go back to the West Bank on buses that pass through the settlements.

According to Banai, the new buses could be a good thing if having them does not mean Palestinians are prohibited from using other Israeli public transportation. During the past six months, however, she has witnessed several instances of Israeli police asking Palestinians to leave public buses.

"I have seen them taken off the buses, humiliated, tired and exhausted because they have been working, and they start walking for miles and miles. And this is a terrible thing. Not to be able to ride the same buses as I ride, I as an Israeli feel terrible about it,” she said.

Banai has little doubt that the expulsion of Palestinians from the buses is due to pressure from settler riders who, she says, complain that Palestinians constitute a security risk and that "they smell."

”Don’t forget these people have permits, they have been security checked and have been working all week for us Israelis — building our houses, cleaning our streets, doing the work we don’t want to do — and we say they smell?” said Banai, obviously outraged.

At the Eyal checkpoint Al-Monitor talked to a group of workers standing on the side of the road waiting for the 5:15 bus. They deny having had major problems with Israeli settlers.

“Sometimes a settler will put a bag behind his seat so I can’t sit there or tell me to get up so he can sit,” said Yousef, shrugging and emphasizing that it doesn’t deter him from riding the buses. Monir adds that it is not the settlers who are the problem, but the police. “They take the permit we have, and say it’s forbidden for me to be on the buses in Israeli cities. They say the permit is just for work and not to drive around, but I don’t understand because I’m heading to work.”

Monir said he hoped the new buses would spare him from such encounters, but Maath Musleh, a Palestinian journalist and lecturer at al-Quds University in Jerusalem, doubted that would be the case. He related the new bus lines to those in Jerusalem, where buses connecting Palestinian neighborhoods are often subject to random stops and searches.

“Palestinian workers might think it’s for their benefit now, because it gets them straight to work and is cheaper, but eventually, because they are Palestinians-only buses, they will be easy targets for the Israeli army. It’s different from now where they ride on buses, which Israelis also use, because the army can’t slow them down when there are Israelis on the buses,” said Musleh.

“If they want to ease our lives, they should do it inside the checkpoint. Sometimes it takes three hours to get through. I have to leave my home at three in the morning,” said Salaam. Pointing to the Palestinian drivers of the minivans, he added, “There are a lot of drivers we don’t need any more. Israel is only trying to stop Palestinian business.”

The drivers of the private minivans looked on with despair and cried out to attract the attention of the workers who paid them little attention while heading for the new buses.

“For years we have driven them to work and back — early in the morning, at noon or even late at night. Now there’s an Israeli company and they take it. It’s not fair!” yelled Sleiman Dahlan, a driver who told Al-Monitor that he had worked at that location for more than 20 years. Dahlan fears that the new buses will take away the main source of income for him and the other 200 Palestinian drivers.

According to Hur, more than 1,000 people took the buses from the Eyal checkpoint on March 4. The new routes are part of a pilot program, but if they are a success, Hur hopes to expand the number of lines, he told Al-Monitor. In the meantime, the Palestinian minivan drivers can only hope that the call by human rights advocates to cancel the so-called Palestinians-only buses will save their businesses.