How this Israeli checkpoint turns morning commute into 5-hour ordeal

The dangerous overcrowding at Checkpoint 300, through which an estimated 15,000 Palestinian workers pass daily into Israel, is a disaster in the making. 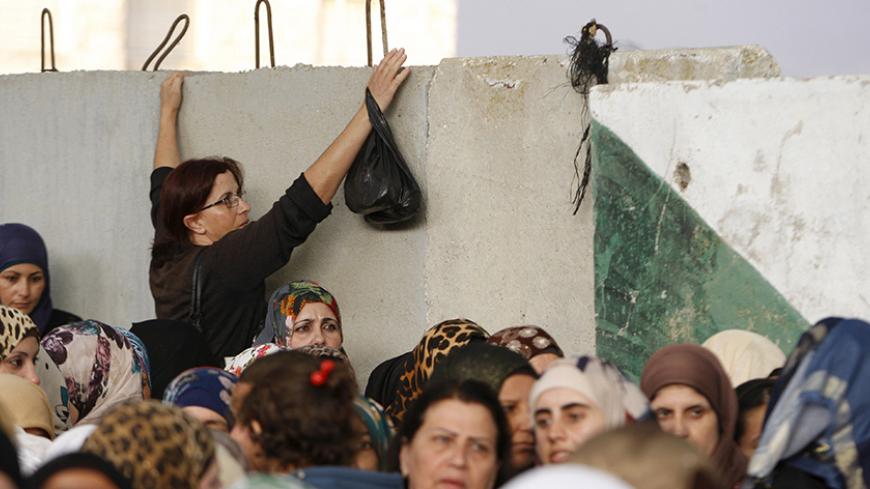 A Palestinian woman tries to bypass others as they make their way to attend the second Friday prayer of Ramadan in Jerusalem's Al-Aqsa Mosque, at an Israeli checkpoint in the West bank city of Bethlehem, June 26, 2015. - REUTERS/Mussa Qawasma

The scene each day at the Bethlehem checkpoint is horrifying. Lucky Palestinians who have managed to obtain authorization to work in Israel — the “ticket to life,” they call it — undergo an exhausting, agonizing wait that can last five hours, even when they arrive early in the morning to beat the crowds.

This is the journey thousands must make to reach jobs that help them survive the economic distress in areas controlled by the Palestinian Authority.

The inhumane overcrowding to get through the “lines” at the checkpoint forces many workers to climb the fences just to avoid suffocation. Some workers, many in their 40s and 50s who don’t have it in them to withstand the long hours of crowding, try to arrive at 2 a.m. to avoid the misery that will increase as more laborers arrive.

“The fight for a piece of railing is the hardest of all,” said Ahmed Darajah, a 42-year-old father of eight from Beit Sahour who works in a quarry. “Only the strong can climb the railing and hold tight to the barbwire fence for hours. Not everyone has the strength to keep hanging in the air all night, and only the strong survive [and keep their place in line]. The rest pray to God.”

The official name of the checkpoint at Bethlehem is the Rachel Checkpoint, but it is also called Checkpoint 300. Its location wasn’t chosen through any planning or forethought, and no one intended for thousands of people to pass through the crossing every day.

On Feb. 25, 1994 — the day settler Baruch Goldstein massacred 29 Palestinians at the Cave of the Patriarchs — Ilan Biran, commander of the Israel Defense Forces Central Command, ordered that a temporary checkpoint be built quickly in the Bethlehem area to prevent angry Palestinians from getting to the nearby Gilo settlement neighborhood. The deputy brigade commander, Shlomo Tzaban, marked off 300 steps from the Tomb of Rachel, on the outskirts of Bethlehem, and set up the first concrete structure that would become the Rachel Checkpoint. Over the years, it has become a central crossing for Palestinian workers entering Israel from the West Bank.

Palestinians must pass through concrete pathways along the separation barrier. At the crossing itself, military police operate carousels that allow only a small group of workers at a time to pass into the security-check area to verify their authorization to work.

According to data provided to Al-Monitor by the civil administration, 58,000 workers exit the West Bank to work in Israel each day. An additional 27,000 Palestinians are authorized to work in West Bank settlements. In February, to ease the burden of unemployment in the PA-controlled territories, the security Cabinet authorized 30,000 additional work permits for Palestinians. Since then, the Cabinet has authorized another 7,000 permits to be issued in the coming weeks.

Workers from the West Bank enter Israel through 15 checkpoints scattered along the Green Line. Checkpoint 300 is the busiest and most crowded. Civil administration data shows 7,000 workers passing through that checkpoint every day, but according to the Palestinians, the actual number is much higher. The West Bank Labor Association reports that 15,000 workers pass through the checkpoint daily, a figure an Israeli security source also believes to be closer to reality. Regardless of the precise number, the checkpoint was not built to handle today's massive flow.

“There’s a demand for workers from the Bethlehem area because it is considered a quieter and more moderate area than other areas in the West Bank,” the Israeli security source told Al-Monitor on condition of anonymity. “Israeli employers prefer Bethlehem workers because they have a reputation as workers you can relatively depend on. They don’t present a security threat like workers from Jenin or Nablus. Hebron-area residents also prefer to cross into Israel through Checkpoint 300 because most of them work in the Jerusalem or Tel Aviv area, and not as much in the Beersheba area [in the south].”

The reason workers are unable to cross Checkpoint 300 in a humane and appropriate fashion lies in the way it is administered. The operation of the other crossings from the Palestinian territories into Israel, including the Erez crossing at the Gaza Strip, has been transferred from the IDF to the Defense Ministry, which hires corporate contractors that use advanced security methods. The crossings surrounding Jerusalem have remained the joint responsibility of the IDF, the military police and the civilian Israeli police. The IDF is not against transferring responsibility for Checkpoint 300 to the Defense Ministry and the Ports Authority, but the Israel Police oppose such a move. Giving up control of the crossing would cost the force millions of shekels in lost manpower and budgeting.

At the Eyal Checkpoint, operated by the Defense Ministry near the Israeli town of Rosh HaAyin, some 12,000 Palestinian workers pass through daily without crowding, thanks to advanced security methods like those used at airports. By contrast, Jamal Abu Warda, a resident of Aida refugee camp near Bethlehem, told Al-Monitor that almost every day Palestinian workers are sent to hospitals with injuries sustained at Checkpoint 300.

“This week I arrived at the checkpoint at 2:30 [a.m.] in order to be one of the first in line,” Abu Warda said. “When I arrived, there was already a long line, but I managed to push in. Suddenly, terrible crowding started. I and a few other workers fell to the ground as others fell on top of us. I felt that I was suffocating. I thought I was dying, but the workers couldn’t be stopped because everyone was pushing.

"I don’t know who thought of it, but then a row of workers formed a human chain and prevented others from falling on top of us. That’s how I was saved. Friends poured water on me and sat me to the side for 15 minutes until I could breathe again. I didn’t go to work that day; I went to the hospital. It’s a shame that [they] do this to us. What do we want, after all? To live with dignity and to provide food for our kids.”

Given Abu Warda’s testimony and that of many other workers, it seems safe to say that if Israel doesn’t improve conditions at Checkpoint 300, it is only a matter of time before disaster strikes there, with Palestinian workers suffocating or being trampled to death.