On the tenth anniverary of the the Israeli West Bank wall, both the United Nations and the leading Israeli rights NGO B'Tselem, estimate that once completed, only 15% of the barrier will actually be on the Green Line while 85% will encroach into the West Bank. Listen to Al-Monitor’s interview with B'Tselem spokeswoman Sarit Michaeli. 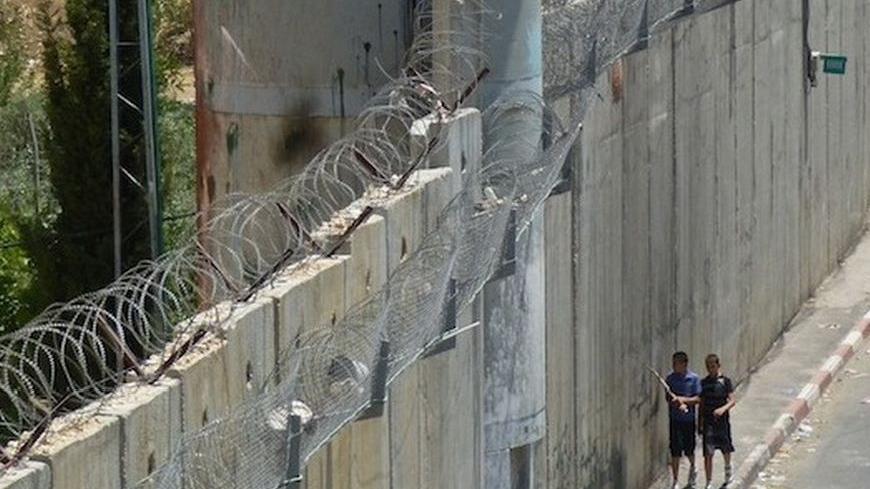 Two boys walk along the wall and past an army watchtower in Dahiat Al-Barid, a West Bank neighborhood on the outskirts of Jerusalem. - Sophie Claudet, Al-Monitor

In June 2002, Israel undertook one the largest projects in its history: the construction of a separation barrier along the occupied West Bank to protect itself following a spate of deadly Palestinian attacks. The barrier — designated as "segregation wall" by Palestinians and "security fence" by the Israeli government — is a complex mix of electronic fencing, buffer zones and slabs of concrete measuring up to nine meters. More than half of the barrier has already been built and it will measure approximately 709 kilometers once completed. So far, 90% of the barrier consists of a two-meter high electronic fence and 10% of an eight to nine-meter-high concrete wall. The construction has cost $2.6 billion and $260 million per year in maintenance.

Hailed as a victory by Israel's security establishment as deadly Palestinian attacks have effectively almost entirely stopped since the erection of the barrier, human rights defenders and the United Nations say it gravely compromises the Palestinians' freedom of movement and basic rights inside the West Bank, and between the West Bank and Arab East Jerusalem. In fact, rather than following the internationally recognized 1949 armistice line, or Green Line, the barrier digs deeply inside the West Bank and separates hundreds of thousands of Palestinians from their land, schools, places of work, hospitals and clinics. Israel has set up dozens of checkpoints and gates along the barrier to allow Palestinians to cross to the other side. However, Palestinians need to obtain a permit to access their land, and more often than not, their requests are rejected by Israel’s Civil Administration on security grounds or failure to provide sufficient proof of land ownership.

Petitioned by hundreds of Palestinians, Israel's own High Court of Justice ordered the rerouting of the barrier in several instances, deeming it was prejudicing their rights. And in July 2004, the International Court of Justice issued an advisory opinion saying that Israel's building of a barrier in the occupied Palestinian territory is illegal and that it should be stopped at once.

Both the United Nations and the leading Israeli rights NGO B'Tselem estimate that once completed, only 15% of the barrier will actually be on the Green Line and 85% encroach into the West Bank. In total, more than 9% of the West Bank will be on the "wrong" side of the wall, which Palestinians denounce as a land grab. In 2012, around 6,500 Palestinians live in the closed are between the Green Line and the barrier, which is also called the "seam zone." Those aged 16 and above must apply for residential permits to continue to live in their homes. Once the barrier is completed 25,000 Palestinians will live in the seam zone. Listen to Al-Monitor's interview with B'Tselem spokeswoman Sarit Michaeli.

* This article and interview is part of a series of stories on the West Bank wall ten years on. Click here to view our slideshow.

Click here to see how residents of Bethlehem are using the wall to their advantage. *