Clashes in Saudi Arabia between Shiite youths and the authorities expose the vulnerability of the kingdom, amid explosive unrest in the region. 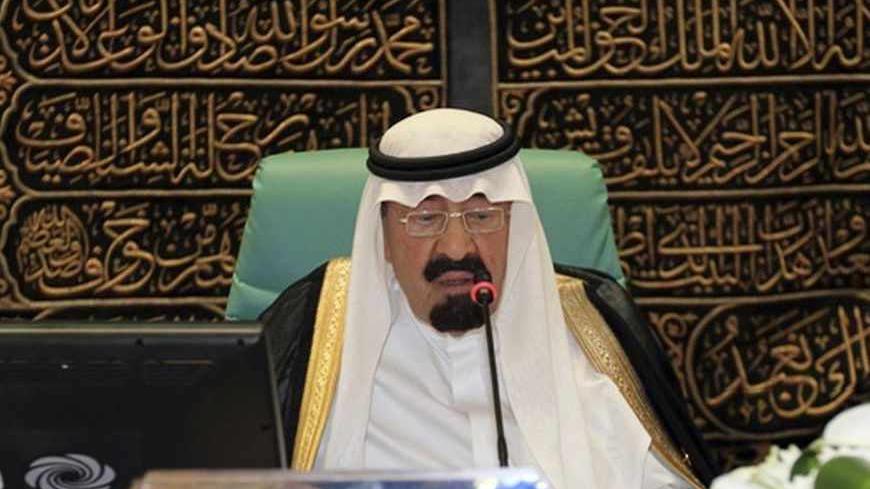 Saudi Arabia's King Abdullah speaks at the opening ceremony of the Organisation of Islamic Conference summit in Mecca, Aug. 14, 2012. - REUTERS/Hassan Ali
Fahad Nazer
@@fanazer
July 3, 2013
A glance at the headlines from the Middle East these days makes clear that the region is in the grip of serious tumult. From the continuing bloodbath in Syria to the near daily terrorist attacks in Iraq to the political upheaval in Egypt, this is clearly a region influx. In the midst of all this — and thanks in large part to near-record oil prices — Saudi Arabia has managed to survive relatively unscathed. However, violence which left two Shiite citizens dead in the Eastern Province on June 22 could potentially trigger a cascade effect that could threaten the kingdom’s stability and security. This evolving crisis must be handled with extreme care by the government as well as by moderate Shiite leaders who have long concluded — and correctly so — that a conciliatory approach is in the best interest of all Saudis.

There are widely varying accounts of the events surrounding the deaths of these two men as well as what kind of men they were and why they were targeted. One in particular, Mursi al-Rebah was on the government’s most wanted list for alleged involvement in armed clashes with the authorities as well as other serious criminal activities. However, many in his Shiite-majority town of Awamiya saw him as a defender of their rights, and they now consider him a “martyr.” A video clip posted on YouTube of a procession following his death appears to include thousands of mourners who could be heard chanting rare anti-government slogans as well as calling for “retribution for those who fired the bullets.” While Shiite protests have occurred intermittently over the past year and a half, most have not been nearly as politically charged as this one. The sense of anger at the perceived injustice is palpable.

Any ratcheting up of sectarian tension in the kingdom, however, could not have come at a worse time. Thanks in large part to the reprehensible sectarian cleansing that Syrian President Bashar al-Assad is committing against Sunnis in Syria, and the recent admission of Hezbollah leader Hassan Nasrallah that his fighters are taking part in the fighting in Syria on Assad’s side, an insidious sectarianism has begun to spread across the region. Not only have various Sunni clerics called on their followers to join a Jihad against Assad’s regime — something I warned about in January 2012 — but the uptick in violence in Iraq is reminiscent of the worst type of sectarianism that threatened to tear apart the country in 2006. In addition, a mob attack which resulted in the deaths of four Shiites in Egypt on June 23 has transfixed the attention of the entire region, given the novelty of sectarian tensions in the overwhelmingly Sunni state. Likewise, violent clashes between the followers of a radical Sunni cleric in Sidon — who also called for Jihad in Syria — with the Lebanese army resulted in the deaths of scores of people on both sides, and was another indication of the Syrian conflict’s spillover.

In 2010, I attended a talk by influential Saudi Shiite cleric Hassan al-Saffar in Virginia. And while he acknowledged that some problems remained, he called on Shiite Saudis to be patient and to adopt a moderate tone in their demands from the government, to ease the restrictions on their religious observations and to allow more freedom in the building of Shiite institutions including  mosques. His conciliatory tone and common-sense approach was clearly aimed at bridging divides and transcending past hostilities. It is this exact approach that other moderate and influential Shiite leaders must take to defuse the increasing tension which will no doubt be stoked by younger firebrands who — unlike Saffar and others — do not appreciate the improvements in the status of Saudi Shiites since the early 1980s, when Ayatollah Khomeini threatened to export his revolution to the rest of the region, thereby creating a sense of mutual distrust between Sunnis and Shiites across the entire Middle East.

For their part, Saudi authorities should be proactive and address this latest incident as quickly as possible. To his credit, King Abdullah has used his position to call on Saudis to eschew primordial tribal, regional and sectarian identities in favor of a unifying Saudi identity. The king’s national dialogue meetings have also brought together prominent Sunni and Shiite clerics to show that a united front committed to solving the country’s challenges does exist.

The latest bout of unrest is also a perfect opportunity for the newly appointed governor of the Eastern Province, Saud bin Nayef, to put his stamp on the governorship by spearheading the reconciliation. He should meet with notables from the region to put this unfortunate incident in perspective and to prevent it from becoming fodder for those who have already fanned the flames of sectarianism. This effort should include reprimanding Sunni clerics who employ sectarian rhetoric or question the loyalty of Saudi Shiites.

While many have argued that the Arab Spring has raised more questions than it has answered, there is little doubt that it has refuted the once dominant adage that “all Arab regimes are the same.” While Assad’s repugnant divide and rule policies have resulted in the deaths of 100,000 people since March 2011, so far about 20 people have died in Saudi Arabia in clashes between Shiite youths and the authorities in approximately the same period.

However, this latest incident, and how the Saudi authorities and Shiite leaders handle it, could be a harbinger of things to come.

Fahad Nazer is a political analyst at JTG Inc. in Vienna, Virginia, and former political analyst at the Saudi Arabian Embassy in Washington, DC. His writing has appeared in the International Herald Tribune, Yaleglobal Online, The Daily Star (Lebanon), The Khaleej Times, The Pakistan Observer and Outlook India, among others. His writing was also included in The Kingdom: Saudi Arabia and the Challenge of the 21st Century. On Twitter: @fanazer