The death of Saudi King Abdullah bin Abdulaziz divided the Shiite community: While many celebrated and rejoiced, others deeply regretted the death of the Saudi monarch who was known for his moderate and reformist attitude. 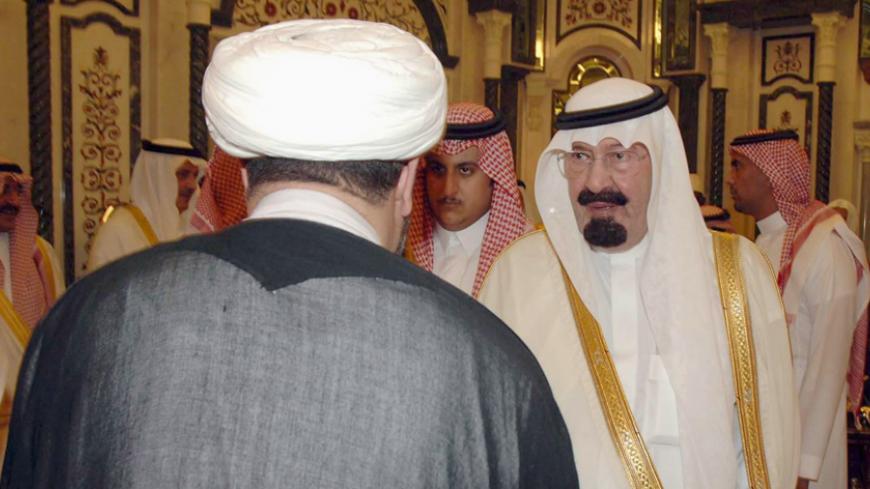 With the current heated sectarian tensions, it is only normal for the death of Saudi King Abdullah bin Abdulaziz to have wide ramifications on the Shiite street. The news received significant attention on all political, social and religious levels and among the diverse components of the Shiite community. The reactions were divided: While many celebrated, others deeply regretted the death of the Saudi monarch who was known for his moderate and reformist views. They saw in the transfer of power to King Salman bin Abdul-Aziz Al Saud a loss of opportunity for Sunni-Shiite rapprochement, as Salman is a religious conservative who opposes the reform movement, which Abdullah had been a part of during his rule.

Abdullah had strong historical ties with many Shiite leaders, including Imam Musa al-Sadr with whom he had a close friendship.

Moreover, the Shiite religious leaders opposing the House of Saud, specifically Hezbollah al-Hejaz, had taken part in a national reconciliation project sponsored by the Saudi king when he [Abdullah] was crown prince. The situation of the Shiite minority relatively improved in Al-Ahsa and Qatif during Abdullah’s reign, and good relations persisted between him and religious Shiite leaders such as Sheikh Hassan al-Saffar and Hashem al-Salman.

Abdullah did not come from an extremist religious wing in the ruling Saudi family, and he did not tend to the Wahhabi religious institution, which played to his advantage. The power in Saudi Arabia is traditionally shared between the Saudi family and the religious Wahhabi institute that is mostly inherited by the descendants of Muhammad ibn Abd al-Wahhab, such as current Mufti Abdul-Aziz ibn Abdullah Al ash-Sheikh.

Most Saudi kings have a very good relationship with their religious peers, while others don’t. Moreover, kings do not have a religious background in terms of studying in Wahhabi seminary schools, which was the case with Abdullah. He even took a stance opposing this institution and put limitations on the work of extremist Salafist sheikhs. Sheikh Mohammad al-Oraifi, for instance, was arrested and forbidden from making political statements in regard to the events in Syria and Egypt in 2013.

The political disputes that broke out in the region due to the sectarian conflicts in Bahrain, Iraq, Syria, Lebanon and Yemen took their toll on Saudi Arabia; they were considered more of an enemy among Shiites. As a result, Abdullah’s reformist efforts went unnoticed, and worse turned him into the archenemy of many.

In addition, there were the stories about the end of time, which were inspired by Shiite tales that Abdullah’s death would shortly be followed by the resurrection of the Mahdi. Unofficial celebrations were held in several Iranian and Iraqi cities on the occasion of the Saudi king’s death. Some Iranian newspapers eagerly received the news.

Moreover, the preacher of the Friday prayer in Tehran, Ayatollah Ahmad Jannati, expressed his joy at the death of Abdullah and described him as the Korah of Saudi Arabia, in reference to a corrupt figure in Judaism and Islam. The Cooperation Council for the Arab States of the Gulf strongly reacted to this statement, considering it a hostile and aggressive action that shows enmity to all Gulf states.

Iranian President Hassan Rouhani sent a message of condolence to Saudi Arabia, while Iranian Foreign Minister Mohammad Javad Zarif left Switzerland after participating in the conference in Davos and went to Riyadh to offer his condolences. Moreover, an Iraqi delegation of high-ranking officials — which included President Fouad Massoum, parliament Speaker Salim al-Jabouri and others from various political parties — visited Saudi Arabia to pay their respects.

As a result, objections among some Shiite politicians in Iraq escalated, and member of parliament Hanan al-Fatlawi posted on her Facebook page sarcastic comments that targeted the Iraqi delegation. She wondered, “Why would Iraq send the biggest official delegation, compared with other states, to a country that doesn’t even have an embassy in Iraq? No prominent Saudi figure has even visited Iraq.”

Remarkably, it was not only Shiites who celebrated the death of the Saudi king, but also the Islamic State (IS). IS spokesman Abu Mohammad al-Adnani expressed his joy at the king’s death. Celebrations were also held by IS militants in the territories under their control.

Elites and civil activists mostly regretted Abdullah’s death and that nobody benefited from the historical opportunity that was present in his tenure to tone down the sectarian strife. Some Iranian newspapers published political analyses about the negative repercussions of Abdullah’s passing on the situation of Shiites and the relations between Saudi Arabia and Iran.

Outdated reports about the extensive cooperation between prominent Shiite cleric [Musa] al-Sadr and the deceased king in front of the distribution of brochures against Shiites were republished. The Iranian media insists on reflecting Abdullah’s positive attitude, which Shiite moderates have become aware of and feel they missed a good opportunity to diminish sectarian tension.

During successive meetings with the Iranian ambassador to Saudi Arabia, the religious authorities of Qom asserted the importance of improving relations between Saudi Arabia and Iran. Religious authority Sheikh Abdullah Jawadi Amuli criticized the joyous celebrations on the occasion of the king’s death, and considered such behavior offensive to many people and harmful to Shiite interests.

A prominent student in Qom, Akbar Mousavi, told Al-Monitor that he had seen some people offer sweets in public places. He criticized such actions harshly and considered them unwise and disobedient to Islamic teachings, as they fuel feelings of hatred and enmity between people.

Thus, it seems that the situation is tense between Saudi Arabia and Shiites in general, and Iran in particular. Things are heading downhill, especially with the rise of the movement known for its strict opposition to Iran in Saudi Arabia.