Yesterday's terrorists are today's heroes, whose release is essential to prevent the wars of tomorrow — in South Africa, Israel and Palestine. 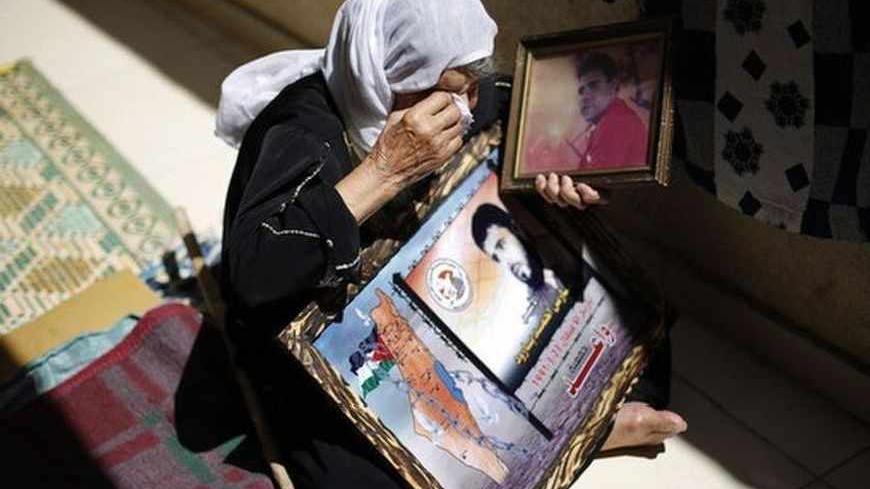 Rayya, mother of Palestinian Fares Baroud, who has been held prisoner by Israel for 22 years, wipes her tears as she holds his picture after hearing news on the possible release of her son in her house at Shati refugee camp in Gaza City, July 28, 2013.

One can understand the feelings of a bereaved Jewish mother who demonstrates in the town square against the release from prison of her son’s killer, or the crying of an Israeli youth orphaned when a Palestinian murderer planted a bomb on a bus. Nothing compares to their pain, and yet, it’s also possible to understand the feelings of a Palestinian mother whose son has still not come home from jail even though the Oslo Accord was supposed to bring an historic reconciliation with the State of Israel 20 years ago. One should also commiserate with the Palestinian girl who has never been embraced by her father’s arms. But revenge is no consolation.

Bonds cannot imprison the yearning of a people for freedom. Ten life sentences will not put an end to the violence of a people struggling to be free of the shackles of occupation. The politician and shapers of public opinion who oppose the release of Palestinian prisoners in order to enable progress toward a diplomatic agreement and an end to the Israeli-Palestinian conflict, would do well to read the words written by former president of South Africa Nelson Mandela, probably the world’s most famous political prisoner.

In an April 1969 letter from his prison cell to South Africa’s justice minister, Mandela wrote, “We are not pleading for mercy but are exercising the inherent right of all people incarcerated for their political beliefs … All of us, without exception, were convicted and sentenced for political activities which we embarked upon as part and parcel of our struggle to win for our people the right of self-determination, acknowledged throughout the civilized world as the inalienable birthright of all human beings.”

Mandela, who was awarded the Nobel Peace Prize together with Frederik Willem de Klerk in 1993, the same year that Israelis and Palestinian signed the Oslo Accord, claimed that resorting to violence was the unavoidable choice of freedom fighters whose bravery stemmed from the courage of their convictions. “No men of principle and integrity could have done otherwise. To have folded arms would have been an act of surrender to a government of minority rule and a betrayal of our cause,” Mandela noted, adding, “The only way to avert disaster is not to keep innocent men in jail but to abandon your provocative actions and to pursue sane and enlightened policies.”

The South African freedom fighter, who was for years dubbed a terrorist, informed the justice minister that “Whether or not evil, strife and bloodshed are to occur in this country rests entirely on the government.”

Israeli Prime Minister Benjamin Netanyahu’s decision to free dozens of Palestinian prisoners may illustrate that he understands that a similar decision rests on his doorstep. Polls conducted among the Palestinian public show that there is nothing more important to them than the release from prison of their “freedom fighters.” The release of those incarcerated is rated higher than the issue of the borders, Jerusalem and the right of return for refugees. On the other hand, opinion polls show that a huge majority of the Jewish public (up to 88%) opposes the release of “murderers with blood on their hands” as a gesture to enable negotiations with the Palestinian Authority (PA).

Interestingly, the vast majority of those opposed to the release of prisoners into the hands of the PA supported the handing over of 1,027 Palestinian prisoners to Hamas in 2011, some of them “with blood on their hands,” in return for the release of the abducted Israeli soldier Gilad Shalit. A poll conducted in October 2011, following the government decision on the deal, found that 69% of the Israeli public support implementation of the deal.

In talks with US Secretary of State John Kerry, PA Chairman Mahmoud Abbas (Abu Mazen) told him that in recent years the Palestinian police handed over to Israeli authorities 95 civilians and soldiers who had lost their way and entered Palestinian-controlled Area A on the West bank by mistake. He wondered whether his people should have imprisoned the Israelis and demanded the release of 1,027 Palestinian prisoners for each one of them.

Israeli opponents of the new deal took the opportunity to condemn Abbas for naming town squares after arch-terrorists and praising them. It may well be that some of those Israeli patriots live on Etzel Street, the corner of Lehi (named after the two militant pre-independent Jewish organizations) or pray at the “Martyrs of the Gallows” Synagogue (named after Jewish militants sentenced to death by the British rulers of Palestine). In the book Annals of the War of Independence, edited by Yaakov Amrami and issued by the revisionist Shelah publishing house, they can find detailed descriptions of dozens of terror acts committed by members of Lehi and Etzel, who had “blood on their hands.”

Hundreds of Arab citizens, among them women and children, were killed and injured in attacks on buses, trains, cafes, a movie theater, markets and a hotel. One hundred people, most of them Jewish and Arab civilians, were killed in the bombing of the King David Hotel in Jerusalem in July 1946. The terrorists — excuse me, Jewish freedom fighters — went beyond the borders of the British-mandated Land of Israel. They attacked the British Embassy in Rome and bombed British officers clubs in London and Vienna. They murdered — excuse me, eliminated — Lord Moyne, the British minister of state in the Middle East, as well as Jews employed by the British police. The Jewish terrorists did not spare the life of Swedish UN envoy Folke Bernadotte, either.

Israel Eldad, one of the leaders of the Lehi (and the father of former Knesset Member Aryeh Eldad, who wrote a sharply critical opinion piece against the prisoner release in Haaretz's weekend edition on July 26), once wrote, “We call all those acts carried out with force and weapons out of a rejection of the laws of a foreign ruler and war against the foreign ruler himself, the Hebrew War of Independence …” These words hold true for any war for the liberation of a people against any foreign rule. The cruel terrorists and the political prisoners of yesterday’s wars are each other’s heroes, whose release is essential to preventing the wars of tomorrow.