Ramadan has lost its holy meaning for thousands of Palestinians suffering due to Egypt's decision to close its border with Gaza. 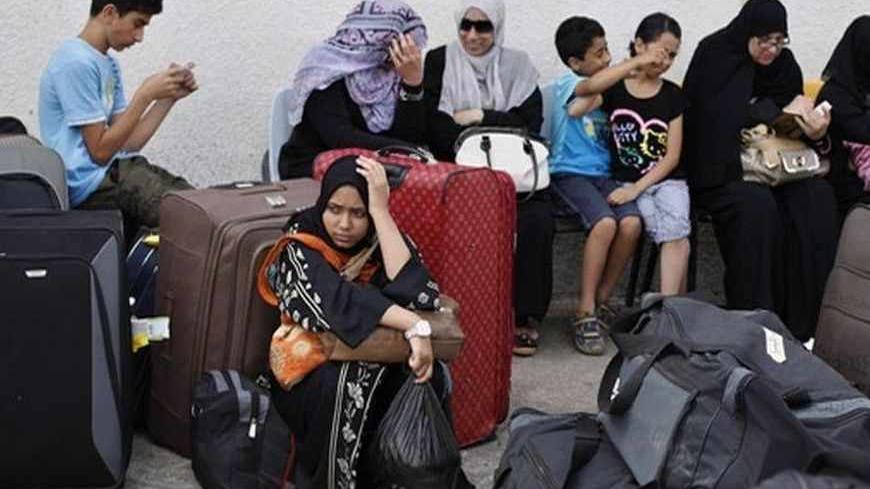 Thousands of Muslims in the Gaza Strip are practicing their holy month of Ramadan this year with the added strain of economic and social hardship, after Egypt shut the Rafah border crossing and the tunnels vital for the import of goods into Gaza.

Adherents usually prepare for Ramadan in advance by storing large amounts of food and drinks, an activity which has become part of the month’s traditions. But Palestinians in Gaza have experienced a lack of food items, fuel and raw materials due to the surprising and abrupt decision by Egypt to shut the tunnels earlier this month following the ouster of President Mohammed Morsi.

Hundreds of people from all social classes gathered at the central market in the old city of Gaza early on the morning of the third day of Ramadan, July 12, to prepare their needs for the day, but vendors say this is one of the worst years the market has witnessed during the month of fasting.

“Every year, I hire more workers at the time of Ramadan, so I can respond to the huge number of customers’ needs. But this year I only have one, and he rarely sells anything,” Tayab al-Jarousha, a 31-year-old grocer told Al-Monitor, as he arranged his products on the stand.

Jarousha attributes the lack of demand for food products to the closure of the tunnels, which has now deprived many of work due to the lack of raw materials coming from Egypt. Most labor fields, as a result, have been negatively affected by the tunnels’ closure.

Several miles from the market, dozens of cars line up outside a petrol station to receive the last drops of fuel from Egypt that Gaza’s stations still have. Most of the cars are taxis, which rely on this cheaper fuel to ensure they maintain their income.

Akram, 27, had just filled up his car with fuel from Egypt, when he told Al-Monitor on July 14 that this might be the last time he could fill his car until the border crisis is over. If the crisis persists, Akram said he will stay home with no source of income.

“Even when I work, the $20 I make per day is barely enough for Ramadan’s big needs. Imagine how it would be if I no longer work,” Akram explained.

Jalal Suliman, 40, a father of four who works as a laborer in a machine factory, said during an interview at his home on July 15 that it has been more than two weeks since he got any work done due to a lack of raw materials and electricity.

“I go to work every day only because I don’t want to feel useless, but in fact I’m not making any money.”

Although the high-quality fuel from Israel still makes it to Gaza through Israeli border terminals, it is at a higher price — almost double that of fuel from Egypt — which most in Gaza simply cannot afford.

Palestinians in Gaza have long endured fuel crises due to Israel’s imposed siege, now in its seventh year, which results in regular electricity cuts. In the best of times, homes in Gaza are deprived of electricity for eight hours a day. Locals have recently tried to adapt to the rotating power outages by scheduling their Ramadan activities according to their electricity shifts.

Hussam, a 40-year-old father of six, gathered his children on July 17 around the dining table for the Suhoor meal, which is the final meal Ramadan observers eat before dawn and before the long day of fasting starts. Only this time, the gathering happened in the dark, with no respite from the summer night’s heat due to a power outage.

One of the six children, Lama, 15, said that Ramadan is already difficult this year due to the long, hot days, and the electricity cuts are only adding further strain, particularly at meal times.

“We almost adjusted to this crisis, but in Ramadan it’s different. We need fans and light, this is unbearable,” Lama complained to Al-Monitor.

To overcome the blackout, many homes in Gaza now have private generators, which have increased the demand for fuel.

Besan Salam, a 26-year-old journalist, struggles to feel the holy sense of Ramadan this year due to the deteriorating living conditions in Gaza.

“I spend the time cursing everyone who might be responsible for such hard circumstances we are living under,” Salam angrily told Al-Monitor on July 17.

The border closure has also left thousands of travelers stranded — many having returned from the Umrah pilgrimage in Saudi Arabia, and who are now unable to spend Ramadan with their families in Gaza.

As Gaza’s only airport was destroyed by Israeli forces in 2001, locals spend hours trying to cross the Rafah border terminal with Egypt — and then take the roughly five-hour road journey to Cairo International Airport to travel abroad. Egypt’s shaky political situation is adding a further hindrance to the ability of Palestinians to travel, with Egyptian authorities routinely closing the crossing each time the situation deteriorates in Egypt.

Maha Fouad, 35, is spending Ramadan without her husband, who is stuck in Mecca.

“It’s the hardest Ramadan I have ever experienced, besides missing my husband. It’s a big responsibility for me to take care of everything in such a busy month,” she told Al-Monitor in an interview at her home on July 14, adding that the holy month has lost its meaning to her family without her children's father beside them.