Jordan's Muslim Brotherhood Is in Shock Over Egypt

Jordan's government is feeling confident after Mohammed Morsi's fall in Egypt, which may demoralize the local branch of the Muslim Brotherhood. 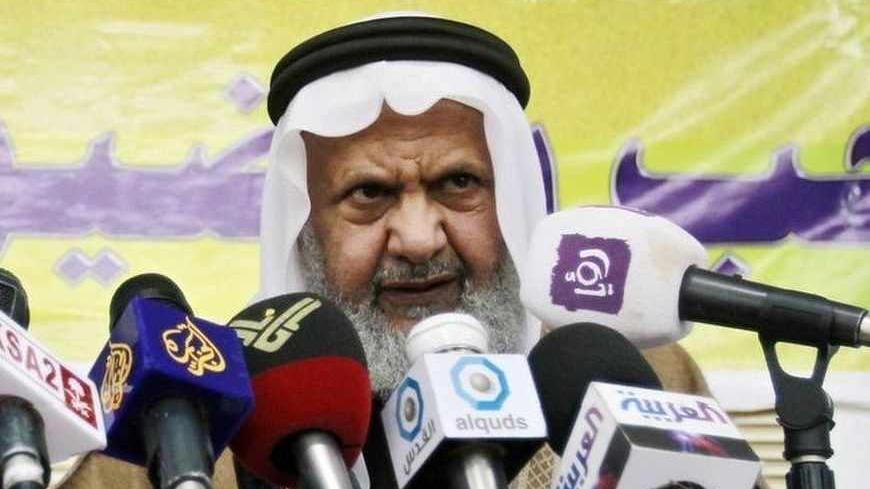 Jordanian Minister of Foreign Affairs Nasser Judeh made haste to send a letter to Cairo in support of the decisions made by the army. Later on, Judeh headed to Egypt to meet the interim president, to whom he conveyed a message from the Jordanian king, reiterating Jordan’s support for the Egyptian people’s demands and the changes that came to pass afterwards.

On the other side, the Muslim Brotherhood was tremendously shocked with what was considered to be a military coup, announcing their support for Morsi and his legitimacy. The head of the Muslim Brotherhood’s Consultative Council in Jordan, Hamam Said, sent a letter to the members of the organization, in which he listed the positive qualities of the deposed Egyptian president and called on them to beware the adverse media and political campaign.

The disparity was apparent in the media. The state-owned Al-Rai newspaper devoted a large part of its Egyptian news coverage to attacking the Muslim Brotherhood in Jordan, while the Al-Yarmouk satellite channel, which is close to the Brotherhood, focused its attention on the Egyptian developments. The channel covered the pro-Morsi and Muslim Brotherhood protests in Rabia al-Adawiya square.

Reactions in regard to the Egyptian developments prompt two major questions. The first is related to the repercussions of these reactions on the relationship between the state and Islamists, while the second deals with the consequences for the Islamists themselves.

On the level of the relationship between the state and the Islamists, no direct political repercussions have been felt. The Muslim Brotherhood boycotted the last parliamentary elections and announced their intention to boycott the imminent municipal elections. Nabil al-Kofahi, one of the most prominent reformist Muslim Brotherhood officials, described the situation to Al-Monitor as similar to a state of “no peace, no war,” as the movement is peaceful and calls on reforming the regime rather than toppling it. The slogans raised in some of the protests, however, were intensified, criticizing the Jordanian king himself in an unprecedented way.

In an interview with Al-Monitor, former Jordanian Minister of Political Development Musa al-Maayta noted that the relationship with the state was related to the Muslim Brotherhood itself. “There are two opinions within the circles that are close to decision-makers,” explained Maayta. “The first believes that it is the right time to hold a dialogue with the organization after it lost its bet on Syria and Egypt. Its expectations are now low; they can be dealt with and the present moment can be seized by pushing the organization to take part in the imminent municipal elections and crafting a formula for the prospective relationship with the organization based on the latest developments.”

According to Maayta, the second opinion adopts a contrary view. “It calls on the state to exploit developments to weaken the Muslim Brotherhood on the political and media level, and to popularly isolate it by focusing on the loss inflicted upon the organization in Egypt, and by exposing its mistakes and internal conflicts.”

The preliminary reactions denote the predominance of the second exclusionary opinion. The official, discreet contentment following the Muslim Brotherhood’s loss on the level of internal and external policy — reflected by the visit of the minister of foreign affairs to Egypt, the message of the king to the new president and the attack of the state-owned newspaper on the Muslim Brotherhood — is a clear sign.

However, the supporters of the first opinion, which calls on integrating the Muslim Brotherhood, tried during the past days to hold discussions and meetings with the members of the organization in order to reach a common vision regarding the next stage and set a political schedule for the demands of the Muslim Brotherhood. The demands aim at implementing radical constitutional and political reforms and are seen by the decision-makers in Jordan as an implicit attempt to undermine the powers and position of the king within the political regime.

In light of these two opinions, Maayta believes that what comes next depends on what the Muslim Brotherhood will do or the messages it will send out. It is related to whether the organization will be inclined toward more intransigence in its political demands, which will cause the crisis to persist, or toward learning its lesson from the Egyptian experience and acknowledging the importance of moderation in demands.

For his part, political analyst Fahd al-Khaitan said in a statement to Al-Monitor that the repercussions of the Egyptian developments will give decision-makers in Jordan two options: the Egyptian model that ushered in a scenario of “democracy without Islamists,” which risks persistent tensions and chaos, or the Moroccan experience, which was able to integrate the Islamists, namely the Justice and Development Party, into the political scene, which guaranteed the stability of the democratic game within a smooth and safe transition.

The first reactions of the Muslim Brotherhood’s leadership and active members on social media sites revealed that they are in shock. They were staunchly inclined to defend the organization against media campaigns and protest in front of the Egyptian Embassy, all the while waiting for things to play out in Egypt. Yet their hopes are still pinned on the return of Morsi, as was the case of late Venezuelan President Hugo Chavez.

The Jordanian Muslim Brotherhood considers what is happening in Egypt to be a decisive and dangerous stage in the organization’s history. They feel that their electoral success was taken away and power was stolen out of their hands. This feeling will later be shaped through the ideas of the organization’s members in Jordan according to the developments on the Egyptian scene, so to say according to three scenarios — return of Morsi, political clashes or political settlement. Any of these scenarios will affect the decisions and stances of the organization within and outside Egypt.

First, the trust the Muslim Brotherhood has put in their political partners, who served as strong allies for the Islamists against former Arab regimes, such as leftists and liberals, was lost, not only in Egypt but also in Jordan. The said partners showed contentment with the military coup, which will lead the Muslim Brotherhood to reconsider the relationship with them and the feasibility of political partnership.

Second, the Muslim Brotherhood is growing increasingly suspicious over the relationship with the “other,” the United States and the West, following attempts at holding a dialogue between the Islamist groups and the United States at the beginning of the Arab revolutions. These attempts included unprecedented visits, meetings and dialogues between the two sides. The US position, however, on what Islamists consider to be a military coup, according to Kofahi, crushed these efforts to repair the relationship.

Third, what happened will give the extremist rhetoric a chance to attract supporters of the Islamist movement, and even some members of the Muslim Brotherhood, who bet on democracy and the ballot box. This strengthens the extremist movement’s rhetoric, which disputes the feasibility of democracy and insists that what was needed at the end of the day was the establishment of an Islamist state that adopts Islam as a governing system, not the democratic system. This may lead the Muslim Brotherhood to back down from the commitments they announced in recent years in terms of adopting democracy as a final system of governance.

Kofahi's observations lead us to conclude that this scenario takes the group toward confrontations with other political forces, on the basis of the Islamic–secular ideological differences, and that the negative results will be proportional to the members of these groups’ faith in democracy.

What confirms these primary features is what can be observed among the supporters of the Islamic movement in Jordan on social networking sites. These sites are full of suspicions about the usefulness of democracy and fury at the other political forces, and they even raise once again the question related to the group's relationship with the Jordanian regime, as one of the most prominent young activists of the Muslim Brotherhood wrote. In the framework of the Egyptian developments, this activist questioned the impact of what is happening in Egypt, on his Facebook page, whether “insistence on gradual change and system reform is still feasible,” hinting of the trend toward politically radical options in dealing with the Jordanian system.

It is still too early to definitively judge the implications of current developments in Egypt on the Jordanian Muslim Brotherhood, be it intellectually and politically, according to Kofahi. These indicators, however, fall under the category of “shock.” These attitudes and ideas may change in the future when the Brotherhood realizes the new reality, should Morsi not return to power and should the current road map be further implemented.

Only then we will be able to watch the Brotherhood tending toward “self-criticism,” reviewing the previous stage and giving priority to rational, not emotional interpretations, which have been thus far dominating the reactions of the group.

Mohammad Abu Rumman is a researcher at the Center for Strategic Studies at the University of Jordan and writes for the Jordanian daily al-Ghad. He has published many books, most recently The Salafists and the Arab Spring and The Islamic Solution in Jordan.