Jordan has been successful in persuading the Obama administration to pay attention to the Islamist threat in Syria. 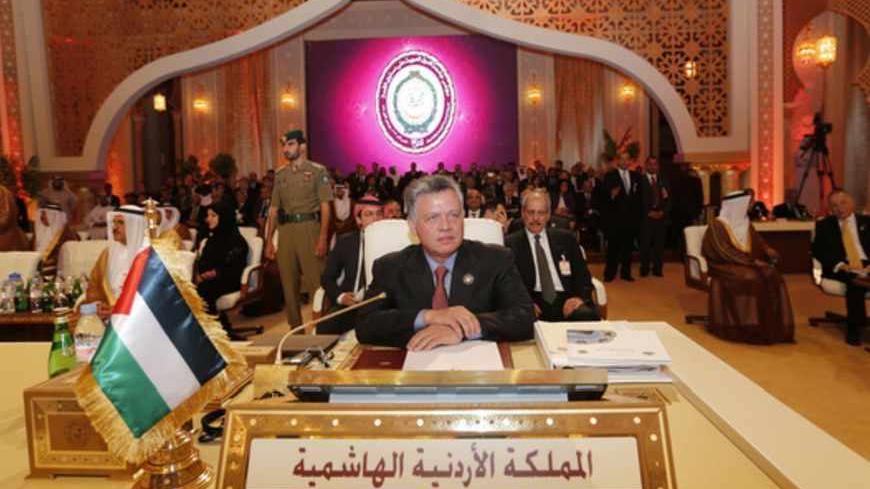 Jordan's King Abdullah II looks on during the opening of the Arab League summit in Doha March 26, 2013. - REUTERS/Ahmed Jadallah
Mohammad Abu Rumman
May 21, 2013

King Abdullah II is no longer hiding his worries about the fate of post-Assad Syria and the danger of it falling into the hands of Islamists, specifically the Muslim Brotherhood, the king’s discomfort toward whom is locally and regionally well known. American journalist Jeffrey Goldberg wrote in The Atlantic, quoting the Jordanian monarch’s criticism of Egyptian President Mohammed Morsi and Turkish Prime Minister Recep Tayyip Erdogan, who are brought together by a background of political Islam. Despite the king’s position stemming from foreign concerns, it also figures into the domestic equation.

These royal concerns are not new. Since the beginning of the Syrian revolution, the Islamist opposition, which represents the greatest political opponent to the regime, has gambled on the revolution's success simultaneously with that of the Muslim Brotherhood in Egypt and Tunisia. This increases the possible direct and indirect gains to be made regarding Jordanian political reform and participation in the political process.

On the other hand, the king has interpreted the situation in Syria as the regime controlling a solid base from military and security institutions and enjoying social support among Alawites. The king was accurate in his assessment, despite American and Western estimations to the contrary. Abdullah II told US President Barack Obama at the end of 2011 that Syria President Bashar al-Assad would stay in power in 2012, a senior Jordanian official informed Al-Monitor.

These conflicting accounts on Syria between the royal palace and the Muslim Brotherhood are strongly reflected in the domestic equation. The Brotherhood laid out seven conditions for participation in the representative elections that were held at the beginning of this year, implicitly seeking a change to the rules of the political game and in a practical sense leading to a marked decrease in the powers of the king and his constitutional, legal and political influence. They boycotted the elections out of protest when these conditions were not met.

In return, the palace worked to insert amendments to keep up with regional changes and the prevailing mood of the Arab public. The king amended the constitution and changed the electoral law, just as he implemented certain political reforms, improving the image of the regime both abroad and at home. At the same time, the king retained the most powerful position in the political equation.

Behind open and heated rivalries, other perspectives distinguished the state and the Brotherhood. The palace argues that the real goal of the Brotherhood in minimizing the powers of the king is to control the political regime, since the former is seen as the only organized party capable of benefiting from this withdrawal of royal powers. This would mean, as expressed by a senior official to Al-Monitor, “surrendering the country to the Brotherhood.”

The Brotherhood suspects that the palace seeks to buy time and does not plan to follow through with true reform, being complacent with partial and superficial reforms until the waves of the Arab Spring subside. More importantly, however, is the heavy and terrifying undertow created by the images coming out of Damascus to Amman. Scenes of chaos, bombardments, massacres, killing and the horrors of civil war have bombarded Jordanian citizens, be they with the Syrian revolution, as is the case with the majority, or with the regime, as is the case with a minority of nationalists, leftists and conservative right-wing groups.

This is not all, for the echoes of the Syrian revolution have broken the back of the Jordanian opposition and unwound the threads of the alliance between the Islamists, who stand strongly with the revolution, and the nationalists and leftists, who back the Assad regime. Their positions have changed to the extent that they have begun to call each other traitors and clash politically and ideologically.

Thus, the shadows of the Syrian scene have pushed the regime in Amman to go even further than that. A state of fear and concern has pervaded among Jordanian citizens, reinforced by the fumbled democratic experiments in Egypt and Tunisia, serving the regime in this sense and harming Islamists.

These considerations have played into Jordan’s policy toward Syria. After the king exhausted hopes of correcting Assad’s trajectory — having sent to Damascus the head of the royal court at the start of the revolution to offer advice to Assad — Abdullah has found himself in an unenviable position in the middle of strong international and regional gravitational pulls. Jordan finds itself in between attempts to save the Syrian regime and reform it, and the agenda of the king’s Western and Arab allies who have sought to forcefully do away with Assad.

Despite the pressures to which the king was exposed by his Arab allies to open the border for weapons to be transported into southern Syria, he held fast to his caution concerning al-Qaeda and Islamists there. As a Jordanian official remarked to Al-Monitor, “What guarantee is there that these weapons will not fall into the hands of fundamentalists?”

In the past few months, important changes have taken place on the Syrian front, shown first by the rise of al-Qaeda by force, arousing the anxiety of the West and the US, second by the direct involvement of Hezbollah in the armed conflict and third by signs of of ethnic cleansing in favor of the Alawites along coastal regions, certain senior Jordanian officials informed Al-Monitor.

These developments portend grave danger to Jordan, with chaos and tension overtaking the northern border and the likelihood of the crisis of Syrian refugees — who now number half a million — exploding in Amman. If the situation deteriorates any more, officials anticipate that as many as two million refugees will come, or 40% of the population of the Hashemite Kingdom of Jordan. This is, of course, an unacceptable and untenable domestic situation.

The new changes have driven the Jordanian position toward involvement in the Syrian issue politically, diplomatically and even militarily. Diplomatically and politically, the king focused his last visit to Washington a few weeks ago, the press attaché in Washington told Al-Monitor, on the difficulty of decisive military action, emphasizing a political solution as the only hope to avoid a scenario of chaos and civil war that would allow the rise and spread of al-Qaeda.

However, sources from the king’s escorts in Washington confirmed to Al-Monitor that the Americans informed him that attempts at a peaceful political solution will not last beyond the end of this year. If these efforts were to fail, Jordanian diplomatic sources told Al-Monitor that they expect the Americans will resort to powerful military intervention in Syria, either with extensive logistical support for the armed opposition or what has been dubbed the “Serbia scenario,” in which air strikes would weaken Assad and lead to a final shift in the balance of the forces.

Until today, the royal palace in Jordan prefers the political solution, seeing it as the most capable of realizing Jordanian interests. If the Geneva II conference were to fail in bridging the gap between the international regional positions, however, Jordan will consider the “Daraa scenario,” helping to create buffer zones in the south of Syria to provide a sanctuary for refugees and receive hundreds of thousands of refugees who had previously fled to Jordan. This assumes a shift in the balance of power in Syria’s south through allowing certain weapons to revolutionaries, an option that the Jordanians are seriously considering.

Fear of the rise of Islamists in Syria, be they the Muslim Brotherhood or al-Qaeda, goes hand in hand with Jordanian policy, even when thinking about providing support for the Syrian armed opposition. Jordan is insistent on empowering factions from the Free Syrian Army and revolutionaries, and even the political opposition that is seen as secular and un-Islamic. This may be what sets the Jordanian agenda apart from their Arab and Turkish counterparts in general, which has been successful in convincing the Obama administration and certain Arab countries of this necessity and the need to pay attention to the Islamist threat, as noted in the king’s meeting with Obama during his last visit to Washington.

Mohammad Abu Rumman is a researcher at the Center for Strategic Studies at the University of Jordan and writes for the Jordanian daily al-Ghad. He has published many books, most recently The Salafists and the Arab Spring and The Islamic Solution in Jordan.