The Iraqi Council of Representatives is blocking a law that would create financial transparency for financing political parties. 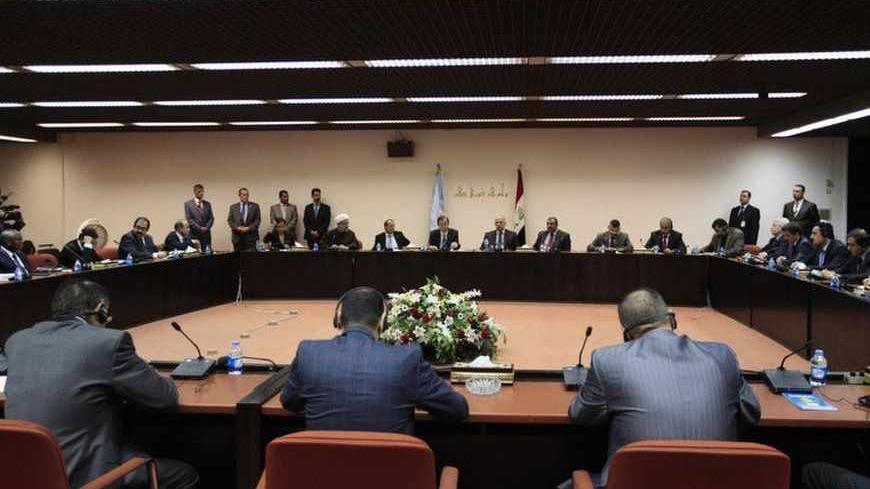 On July 9, 2013, a source close to Iraqi Parliament Speaker Osama al-Nujaifi revealed that the political parties draft law will not be enacted during the current legislative session, due to sharp differences between the leaders of political blocs.

“Long discussions were held last week between the leaders of political blocs in parliament regarding the law. However, no consensus has been reached to pass it during this session,” the source said in a statement to Al-Monitor.

The source, who spoke on the condition of anonymity, added, “This law was supposed to be voted on during the session, but due to mistrust between political blocs, political leaders failed to reach an agreement in this regard.”

Speaking to Al-Monitor, Ahmed Abdullah, the deputy chairman of Iraq’s Integrity Committee, said, “Major political parties, especially those in the government, do not wish to enact this law because it reveals their financial resources.”

“The political parties law provides for strict conditions on financial returns and sources of donations. Therefore, the parties that are receiving suspicious funds will not allow its legislation,” he added.

According to the draft law developed by lawmakers, funding resources for political parties include: subscription fees of its members; internal endowments and donations; returns of [the party’s] newspaper, publications and other activities; and financial support from the general budget of the state as per the Annual Budget law.

In Iraq, based on the law that has yet to be enacted, political parties have the right to own real estate to establish their headquarters and branches. Also, according to the same law, the identity of donors should be verified and parties must publish the names of donors in the party’s official newspaper. Donations of physical goods or cash that are intended for illegal gains in favor of the party or the donor are banned.

The parliamentary Legal Committee revealed on Mar. 28, 2011 that the law was handed over to parliament after having been approved by the prime minister. However, it has remained on the shelf without being discussed, due to problems between political parties and objections to many paragraphs, which some parties considered restrictive.

“The law will forbid many parties from funding electoral campaigns through exploiting stolen money from the government,” Abdullah said.

The political parties draft law that was presented to the parliament includes 69 articles. Article 40 allows the administrative court to disband a party if it was proven that the party’s activities were military or semi-military in nature or that it was conducting an activity that threatens the security of the country, the unity of its lands, its sovereignty or its independence.

Al-Monitor was able to secure a copy of a press statement made by Ashour in which he stated, “The political parties draft law is at the parliament’s disposal, but it has not been on the parliament’s agenda for a long time.”

Ashour added: “Holding elections without this law will distort the voting process. Ratifying the law will protect the democratic experience in Iraq from intruders and infiltrators, and there is a pressing need to register parties and prove their identity to pave their way for the coming elections and to conserve the democratic aspect and integrity of the elections.”

Riyad al-Zahiri, an Iraqi researcher who holds a Ph.D. in political science, said, “We cannot talk about a democratic system in Iraq unless the Iraqi constitution from the year 2005 is completed, along with the main laws governing political life in Iraq.”

Speaking to Al-Monitor, he added, “Article 39 of the constitution stipulated the right of Iraqis to form political parties and guaranteed their right to join these parties and withdraw from them. However, this constitutional base needs a law that specifies in detail the establishment measures, as well as the rights and obligations of parties, the means of implementing their programs, funding methods and their relations with each other.”

However, it seems that the political parties law will not be implemented before 2014, and Iraqi parties will compete in the next legislative elections in the absence of a law that governs their work.