Amid ongoing controversy, the Iraqi parliament is preparing to pass three different laws dealing with criminalizing the Baath Party and regulations for the court and political parties. 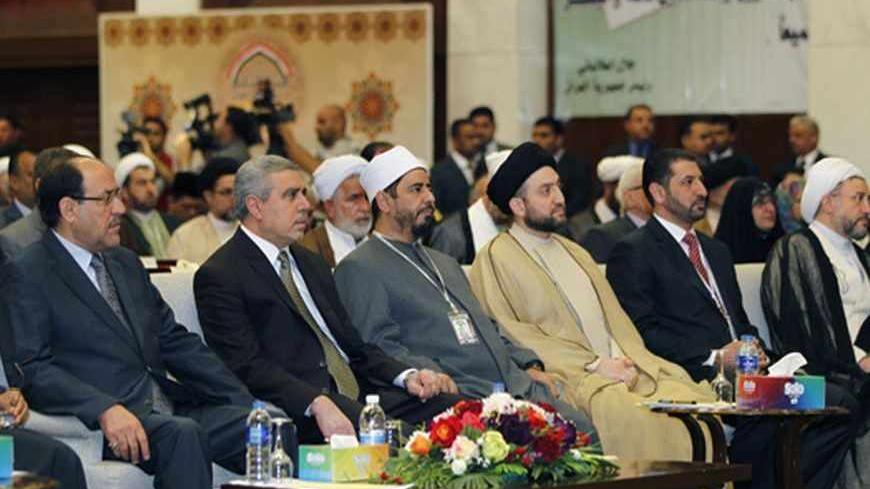 Party leaders in the Iraqi parliament succeeded on July 3 in completing an important agreement on enacting three laws: A law criminalizing the Baath Party, the (Iraqi) Federal Supreme Court Act and the (Political) Parties Law. Mohammed al-Khalidi, a Sunni MP and parliament rapporteur, said in a press conference attended by Al-Monitor that Osama al-Nujaifi, speaker of the Council of Representatives, met with the heads of political blocs and parliamentary committees, and that it was agreed to vote on controversial and deactivated laws in the Council of Representatives in mid-July.

This Council of Representatives declaration is considered an important event for Iraqi politics, due to the delay in enacting legislation — such as the Parties Law and the Federal Court Act — since 2003.

Civil activists and observers in Iraq believe that over the past 10 years, the political process in the country has been working without laws guaranteeing democracy, such as the political parties law.

Khalidi said, “The controversial laws are the Federal Supreme Court Act, the amendment to parliamentary elections law, the law banning the Baath Party and dissolved entities and parties, and racist, terrorist and takfiri activities, and the first amendment to the Supreme National Commission of Accountability and Justice Law.”

Khalidi said this was in addition to “the law on the amendment of the penal code and amendment of the criminal procedure code, the draft law on the seizure and confiscation of movable and immovable property of the pillars of the former Saddam Hussein’s regime, the law to abolish the unfair manipulation of administrative boundaries of provinces, districts and regions across Iraq and the (political) parties law.”

Political efforts were exerted ​​over the past few years to settle these controversial laws. Yet, they did not yield any results.

Khalidi stressed, “These laws will be subject to vote in a package deal on Monday (July 8).”

Iraqi politicians have resorted to the package-deal mechanism to vote on the controversial laws. This means that the blocs will pass laws that they are not in favor of in order  to obtain benefits from enacting other laws that serve their purposes.

A recent dispute erupted between the State of Law Coalition, led by Prime Minister Nouri al-Maliki, and the Mutahidoun bloc, led by parliament Speaker Osama al-Najaifi, against the backdrop of enacting a law criminalizing the Baath Party, which was led by the former Hussein regime.

Nevertheless, the recent agreements seemed to enable them to pass the law in the form of a deal.

It should be mentioned that the Federal Supreme Court Act is among the most important laws that were supposed to be legislated by parliament nearly two years ago. The sharp differences between the blocs’ leaders, however, prevented this from happening.

Religious political forces, including the Maliki coalition, were keen to appoint Islamic Sharia jurists who have the veto right in the Federal Court.

Othman told Al-Monitor, “The Federal Court Act was put off by the differences on selecting religious jurists and their number in the Federal Court, which has the power to take a final decision regarding all the problems that beset the country at any time.”

Yet, a senior political source told Al-Monitor, “The package deal probably provided to cancel or reduce the number of jurists in exchange for passing a law criminalizing the Baath Party.”

The State of Law Coalition was subject to sharp criticism for insisting on issuing a law preventing Baathists from working in the Iraqi official institution.

Yet, Ali al-Shallah, a Shiite leader of the State of Law Coalition, told Al-Monitor, “The law criminalizing the Baath Party is a future law, is in the interest of everyone and is not about the past, particularly since it prevents anyone from establishing a party similar to the Baath Party in the country.”

He continued, “In Germany, no one is able to establish a party (that embraces principles) close to those of the Nazi party. Therefore, criminalizing the Baath Party is a law necessary to secure the future of Iraq from ideas and parties that embrace fascist thought.”