Iraqi politicians local election campaigns are out of touch with the needs of the people. 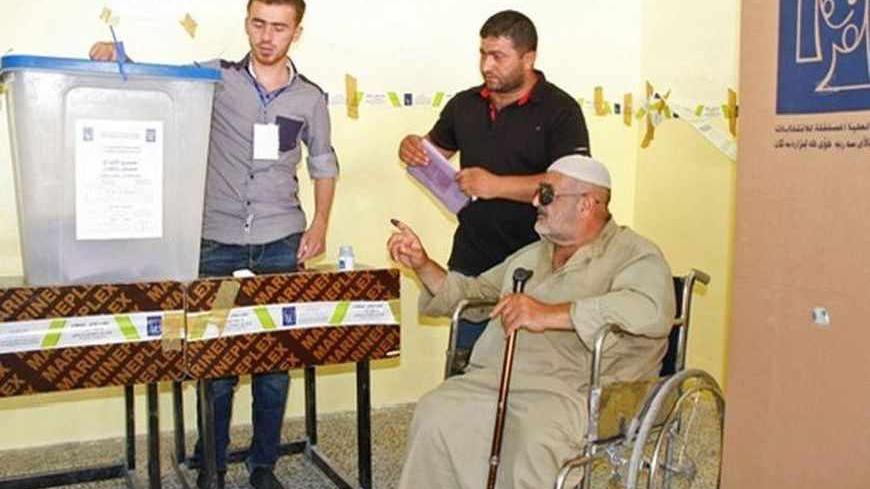 An elderly Iraqi man in a wheelchair receives help as he votes during Iraq's provincial elections at a polling station in Mosul, 390 km (242 miles) north of Baghdad, June 20, 2013. - REUTERS/Khalid al-Mousuly

Electoral campaigns in Iraq — such as the ones in 2005 and 2010 — refer to the days right before the elections, during which pictures of candidates are hung in public places and advertisements on television promote candidates, who communicate with tribes and clerics to urge them to cast their vote in their favor.

The truth is that the concept of an "electoral campaign" has expanded across the world, and has become an integral part of political practice — whether the elections are in the offing or not.

On this basis, it is true to say that political practice serves in one aspect as an electoral campaign, through which politicians seek to assess the views of the street beforehand, work on changing negative attitudes and create deep positive feelings.

However, this is not the case in Iraq. That is why we find a large gap between electoral slogans and political practice in Iraq.

The Iraqi governorate elections that took place on April 20 were an occasion to test the changes in the Iraqi political mentality, before testing the voters’ inclinations.

Iraqi politicians customized electoral campaigns and established that the election period is completely detached from actual political action. Thus, the three months that preceded the polling process were rife with activities, conferences and statements. Candidates visited remote villages, dealing with clans and clergy, and distributed financial aid to the poor. However, all this ended after the election results were announced.

The winner was preoccupied with forming the new local governments — and his position in it — and the loser dragged himself out of sight, awaiting new opportunities.

It is exactly here where the imbalance in the Iraqi political circle — which built a solid barrier between political action and social work — has emerged.

National elections will take place in Iraq some time in 2014. Starting already, electoral motives in escalatory statements and positions here and there can be felt.

The politicians have learned that playing sectarian and nationalist chords during election periods can guarantee that they continue to get the votes.

Yet, this interpretation is incomplete and stereotyped. It neglects that the political and electoral sense of the Iraqi street is evolving and is inconsistent, and to guarantee its votes, the street will need more than sectarian and nationalist slogans.

In the local elections, talk of a 50-70% boycott of the voting process was a real wake-up call. The politicians should have felt and handled the reasons for this boycott, so that it does not turn into a growing phenomenon challenging the legitimacy of the whole democratic system.

Today — less than eight months before the general elections are to be held — politicians should take to the street, share the street’s ideas, feel the suffering of the population and initiate launching social campaigns that prove the candidates are rooted in their communities.

Simply relying on pictures and slogans launched a few days prior to the elections does not show that Iraq is a serious political society. Yet, it repeatedly demonstrates that Iraq is controlled by the experiments of amateurs who don't possess the keys to the future.