Despite the United States easing the ban on medicine, Iranian patients with serious illnesses continue to suffer from sanctions as well as government mismanagement. 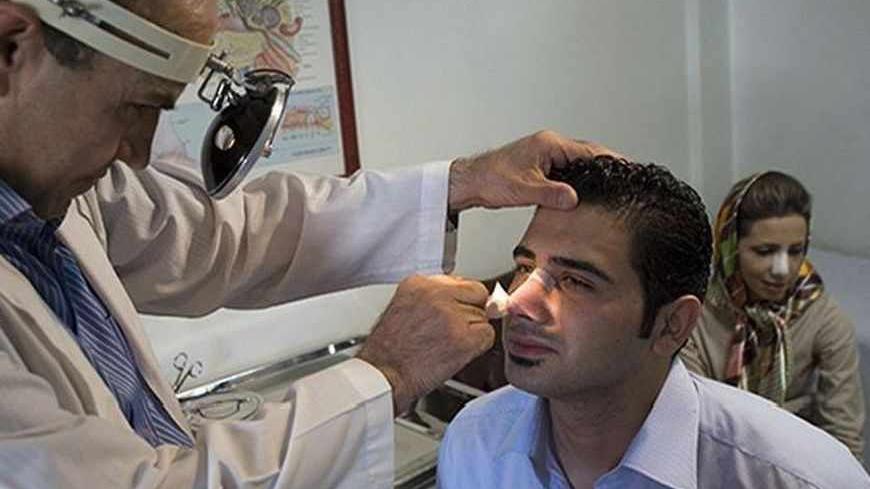 Surgeon Nabiollah Shariati removes tape from the nose of his patient Amir Ahadi as his sister Reyhaneh waits for her check-up at the doctor's office in Tehran June 24, 2007. - REUTERS/Caren Firouz
Mani Fardad
July 29, 2013

Although the US Department of the Treasury issued an advisory to encourage the sales of medicines to Iran and released an expanded list of basic medical supplies authorized for export to Iran, interviews with multiple sclerosis (MS) patients and the former head of the Iranian Hemophilia Society point to an ongoing and expanding scarcity of medicines in the country.

Over the past two years, Iran has faced the toughest, most comprehensive US-led sanctions to date. The sanctions target Iran’s oil exports, shipping, airlines, petrochemical and automotive industries, banking system and currency, which means they also target its people.

On January 4, 2010, US Secretary of State Hillary Clinton asserted that the US administration opposes sanctions that hurt the Iranian people. “Our goal is to pressure the Iranian government, particularly the Revolutionary Guard elements, without contributing to the suffering of the ordinary [Iranians], who deserve better than what they currently are receiving,” she said.

Later she reiterated that targeted sanctions are the “smarter” way forward: “It is clear that there is a relatively small group of decision makers inside Iran. … If we can create a sanctions track that targets those who actually make the decisions, we think that is a smarter way to do sanctions.”

How “smarter” have the sanctions been? Most Iranians are managing to cope with a range of problems and stressful living conditions given the destabilized economy. Medical patients and their families, however, have had more to be concerned about because of significant shortages of medicines.

Hessam, a 27-year-old veterinary student with MS told Al-Monitor, “I have managed to buy Rebif every month, but the price has tripled over the past year.” He added, “Those who need to use other Western-made medicines, like Avonex and Betaferon, have been facing extremely serious problems buying them. Betaferon's price has risen from 980,000 rials [$40] to 16,000,000 rials [$649, a box]. You cannot find them even at this price at any drugstores.”

Rebif, Avonex and Betaferon are forms of interferon beta, which is injected weekly or every other day into the muscles. When they were available, they were being imported from the United States and Germany. MS patients in Iran primarily used these three medicines, which have been approved for the treatment of relapsing forms of MS and are subsidized through Iranian health insurance.

There have been several reports of liver damage and white sight in MS patients taking Iranian-made medicines, including Ziferon. Hessam said he has witnessed patients in some clinics complaining about such liver problems.

Hamid, a 24-year-old software developer who has been coping with MS for five years, is dissatisfied with the Iranian-made medications that have replaced those formerly imported from the West. He said that when CinnoVex began to be produced in Iran, to replace US-made Avonex, the health insurances announced that they would no longer support imported MS drugs, so their prices immediately soared. According to Hamid, most patients have been forced to replace their regular medicines with Iranian-manufactured drugs.

Hamid strongly criticized the government for mismanagement, which is as another reason causing drug scarcity. He said that sometimes even drugs like Dexamethasone, a steroid, are not available at drugstores.

The first civilian death said to be directly linked to the impact of Western sanctions was reported in mid-November 2012. Manouchehr Esmaili-Liusi, 15, a hemophiliac from a nomadic tribe in the mountains near the city of Dezful, died in the hospital after his family failed to find the vital medicine he desperately needed for his disease.

News of his death was announced by Ahmad Ghavidel, the former head of the Iranian Hemophilia Society, a nongovernmental organization affiliated with the World Federation of Hemophilia. As a result of sanctions, he told Al-Monitor that hemophilia patients cannot easily get access to their medicines, and due to shortages and high prices, are unable to buy and store them at home in case of an emergency.

Ghavidel blamed Esmaili-Liusi's death on the United States and the European Union because of their punitive measures against Iran, which are also hitting imports of hospital equipment. “The Iranian Hemophilia Society believes that the US and EU are hiding behind an inefficacious act that exempts medicine and food from the list of sanctions,” he said. “We have been facing critical problems providing medicine since the new sanctions started. When the West sanctions our banking system, our medicine import and pharmaceutical industry are affected as well.”

The US government denies that it is responsible for the medicine crisis in Iran. In early June, Under Secretary for Political Affairs Wendy Sherman testified before the Senate Committee on Banking, Housing, and Urban Affairs, asserting that the United States had worked hard to ensure that US regulations do not unduly interfere with transactions for the sale of agricultural commodities, foods, medicines or medical devices to Iran.

Later, talking to Radio Free Europe / Radio Liberty she blamed the Iranian administration for inadequate budgeting. “My understanding is that part of the problem on these issues are decisions by the regime. In fact, I think the health minister, until she was fired, indeed herself said that Iran was not putting enough of its budget, its hard currency, against the importation of medicine for the Iranian people.”

Reports of widespread shortages, notably of specialized medicines, persist. This means that the mechanism for building a channel to meet Iranians' medical needs is still not working. A sanctions waiver allows humanitarian trade, but other laws restricting financial transactions with Iran make it impossible to take advantage of the exemption.

When asked how badly hemophilia patients are being affected by sanctions, Ghavidel said, “We call it a brutal latent killing when our kids bleed, and because of the scarcity of their medicines, they get closer to disability and death. We had enough factor VIII in Iran before the sanctions intensified. We had a reserve of more than 1 International Unit (IU) per capita – 1.6 IU. The amount has declined to a third, and we have been witnessing the bitterest days of our lives over the past two years. The number of life-threatening internal bleeds and joint damage has increased in our patients. Because of factor VIII's scarcity, most women with hemophilia are suffering from clotting disorder about 15 days during a month.”

The situation is described in an International Crisis Group report, which notes that US and EU sanctions exempt medicine, food and humanitarian aid, but the financial restrictions have gone a long way toward neutralizing such waivers. “Foreign banks remain reluctant to do business with Iran for fear of running afoul of the complex web of sanctions. Steering clear of business with Tehran is the path of least resistance,” said the report.

Making matters worse are the mismanagement in Iran’s governmental bodies, system corruption and black market operators. Huge amounts of medicines and medical ingredients worth some $60 million to $70 million are being held by internal customs, according to Iranian news agencies. The bottleneck is the result of the current multiple-exchange-rate system, another consequence of sanctions against Iran’s currency, which the Central Bank recently adjusted. The medicines are not being allowed through customs because of a lack of coordination among the Central Bank, the Customs Administration, Ministry of Trade and Ministry of Social Welfare, which is in charge of the country’s public and private health insurances.

Trapped between an incompetent administration and a seemingly unconcerned outside world are the ordinary people of Iran, as the “smarter” sanctions target them as well.

Mani Fardad is a pseudonym for a reporter based in Iran.